We left Jane’s early in the morning, first stop ‘fuel’ , we filled ‘Hector’ to the top, plus the generator, total cost £110, hate to fill him up when he is empty!! Off to the Forest, having stopped for lunch, we quickly found a spot to park, it is lovely here, very quiet, all you can hear are the birds.  We set our chairs out, and opened our bottle of champagne that Mark and Paula had given us to christen the boat, so we used it on ‘Hector’ instead.  In the 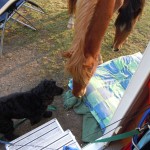 evening, we were surrounded by ponies, Bella and Sooty enjoyed them, later we found our batteries were low, very strange after such a long trip, the television worked well, and so did the fridge, we will see in the morning. 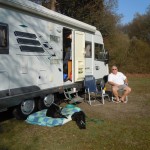 Friday was beautiful, we started the generator, to top the batteries up, then went for a walk with the dogs in the forest, fantastic. In the afternoon, we went to Southampton to change some stuff we had bought, came home and started the generator again.Andrew and Natalia came over for dinner we sat outside until late, then played UNO, sadly the lights failed about 10pm, Andrew went home and we retired early. 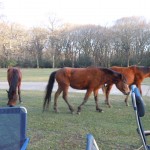 Saturday, the generator would not work, so no electrics, no electrics, means no water, no anything really, so we went to the Hotel to use email, and to complain to Southdown’s, we decided that there was no point in carrying on as we could not even flush the loo.  We went for a ride on ‘pinky and perky’ along the country roads it was good fun, brightened our day, until Geoff fell off.  Loaded bikes on trailer, I cooked dinner, and we played crib by torch light, before going to bed early.

Up quite early, and delivered ‘Hector’ to Southdowns then back to Bournemouth, we are now staying in Sandbanks with Andrew.

This entry was posted in Hector, UK. Bookmark the permalink.