Up early, again!, but with purpose, we were off to Rome. Our last breakfast, much the same as before, nice but repetartive due I suspect to the few guests staying; still nice never the same. Naturally it ws raining when we packed the car, still, paid and gone in reasonable time. 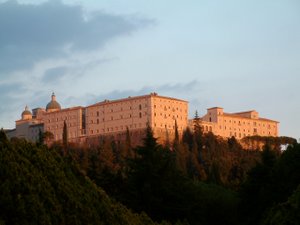 We had decided to stop en route and visit the monastery at Monti Cassino, the one on top af a mountain 520 meters above sea level which was destroyed during the war By allied bombing and heavy artillery.This place was so stratragic to the Germans, their defensive “Gustav line” created Accross Italy to defend Southern Europe that the Germans defended it at all costs and by the end  there were a total of 55,000 Allied 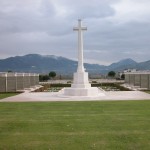 and 20,000 casualties. The battle for Monti Cassino lasted from 17th January to 18th May and as The terrain approaching the monastery is so steep in all directions that much of the fighting was hand to hand.  There are a number of military cemeteries in the area.

The good news is that this magnificent  Monastery has been fully restored in all its glory and was well worth the time out to visit. 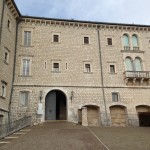 The Entrance to the Monastery

This site started out as a pagan place of worship in the 5th century by the Volsci, people living in this area until the Romans defeted them in 312BC and rebuilt it as a “Temple to Appollo” until a monk name do Benadict, later to be Saint Benadict, arrived.   He destroyed the pagan alter, introduced Christianity and turned the existing building into  a Christian place of worship, and then started the construction process of the earliest Monastery. 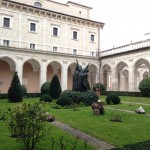 Throughout history the Monastry as had to endure attacks and sackings, examples are; the Lombards in 580 AD, the Saracens in 884 AD and Napolean’s troops in 1799, not to mention 1944: additionally they had to content with an earthquake in 1349.   One has to admire the Catholic Churce determination in this place!!! 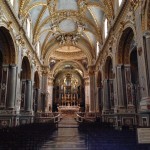 First Impression as you. Walk into the Brasilica

The inside visit was fairly short, much of the building is closed to the public but the Brasilica was open.  The moment you stepped into this very large space your mouth just dropped, talk about a wow factor, well multiply this by ten and you have an idea.   The Mosaics and wealth inside, Frescos on the walls, on the ceiling not to mention the paintings, magnificent! as the Americans would say, “Awsome”. 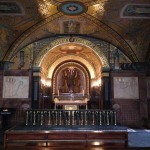 We wondered around but there was so much to take in but we only had a short time, this meant unfortunately, we couldn’t take it all in.  I would highly recommend a visit to anybody who is passing by someday.

Back on the road after a quick coffee and heading into Rome.  Ezmerelda (Tom Tom) did her staff though one or two instructions were a little slow coming over as several 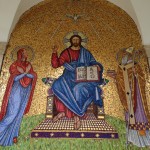 One of the many wall decorations

junctions were so close and traffic was moving quickly, we were driving faster than she spoke, still well done Ezmerelda, we arrived.  Parked outside on a fairly busy road, took our bags, booked into our room then headed out to deliver the car to a pre booked car park about 2 KM away.   Ouch, the Rome drivers seemed madder than the ones in Naples, and they were lunatics! 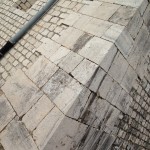 Tom Tom got us to the Street, half way down this one way street of course, but couldn’t find the car park.  To make matters worse, this street was alongside the main railway station, so taxis, cars, trams,buses and military vehicles all around, well you can imagine the tempriture in the car.  Not only was it chaos but we couldn’t find anybody to ask!  So we veventually pulled into the station taxi rank and asked a taxi driver only to be told it was the other end of the street we had been in, so back into fighting traffic, circumnavigating the station, again, and eventually we found the car park, HORRAY!!!!! Of course it was the other end of the street we arrived at half way down.

Parked up and thought we would walk the 2 kms back to the hotel, using Tom Tom in walking mode.   Tom Tom had different ideas he/she kept changing her mind as to which direction to go.  Anyway after much heated discussion, again, we got back to the hotel having walked about 5 kms.

Time to eat so found a nice looking Restaurant next door, not too far to walk!  Whilst wnjoying our Pasta, looking out of the window, it was raining and there was a fellow standing outside selling Umbrellas.  Now I remembered to bring my brolly out of the car when parking, but unfortunately I managed to loose it somewhere whilst fighting ToM Tom, so I was in the market after all rain was forecast for much of our time here    in Rome.  Asking the price through the window he said €20, I naturally laughed and said I would give him €5, he said no; anyway negotiatings went on through the course of our meal: he was very persistent and I was adamant, my offer was my only offer.  Anyway as we left the restaurant with a Five Euro note in my hand, he agreed so I now had a brand new brolly.

back to our hotel room and to bed, a bid day tomorrow, come on England