We awoke this morning, still on a high from our Tango Experience and still smiling as we went to breakfast; what a superb evening.

Today we are off to La Lucila, a residential area 12 miles to the north of BA and also where I lived as a small boy during 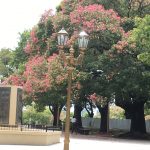 our second visit (1949-1951). I didn’t really expect to find our street, though I did have in “my minds eye” a description of the surroundings where we lived. 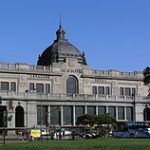 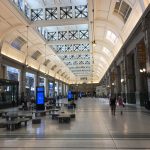 Could be in Uk!

Railway station that opened for business in 1915. The steel structure of this building was made in Liverpool and re-constructed on site. Entering this station was a like walking 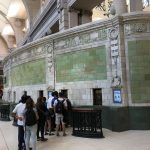 back in time, for example the original ticket booths are still in use today, though naturally all the locals have “SUBE” re-chargeable plastic cards.   Once we headed for the platform we were back in the 21st century, card scanning turnstiles, and walkthrough, air-conditioned, airy trains.

Seven stops later and we’d arrived in La Lucila and being that time of day, headed for a coffee shop, this also gave me time to gather my bearings, if I had any that is!!!

From memory we were the wrong side of the railway tracks, so 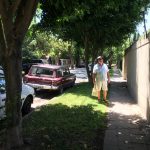 I wonder where I used to live?

headed across and wandered around numerous leafy lanes but to no avail. My memory was obviously blurred with time but I was right with one thing, this was still a very nice residential neighborhood.

We are now back on the train, heading to the city centre and on to the hotel, though we did stop for lunch along the way. We were going to go out tonight but were again knackered so it was an earlyish night.

We woke Friday to rain; very heavy rain so our plan to walk to Recoleta and visit the city of the dead was postponed though 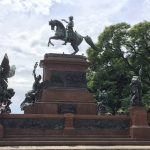 Very grand monument in the park

today was also going to be the day we visited the local “Parrilla”, Argentinian Steak house. We had been looking forward to this but had to wait ‘till around 1400hrs so to kill time we had a stroll in one of the many parks around. In this park we came across one 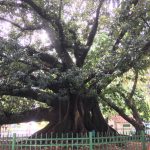 of the biggest trees we have ever seen; not so much tall, but broad with a huge trunk and many of the branches supported to avoid blocking the paths. Whilst out we also visited the hotel we are meeting Trevor and Gill at tonight. It is strange that to meet our friends, we have travel to the southern hemisphere, to actually find a slot in our collective diaries.

Back at the Steak house for ½ a beast, salad and Malbec; what could be better, and we may have to do this again tomorrow when we meet our friends!!!! I was always impressed with the El 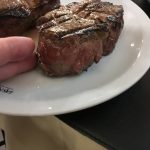 Just a couple of small steaks!

Gallego steaks in Pilar, but sorry, these are bigger!!!!

We waddled back to the hotel and rested our full stomachs, though by only eating meat and salad, we were comfortable enough when we went to bed. 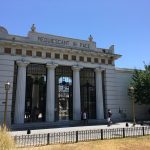 The grand entrance to the cemetery

After a rather long night the sun was back shining so today we are off to visit the city of the dead. This is the “Recoleta Cemetery” where the main distinction between this cemetery and others is that nobody is actually buried here; they are all 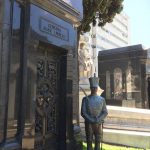 This one had his personal bronze guard

above ground in their own private mausoleums, 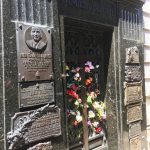 Eva Peron is here, I was expecting a grand one for her.

including that controversial person, Eva Peron; actress and first lady of Argentina.   Some of these structures were quite magnificent and inside several 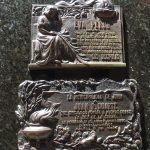 Tiny plaque to denote here she is!

were adorned in gold; my there was an awful lot of wealth here in the mid 1800’s onwards. Normally a visit to a cemetery wouldn’t be on our radar but this place is something 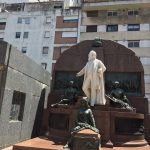 So amazing, some of these statues

different, it was opened in 1822 and currently has 4691 vaults, (though they would be very pressed to squeeze more in), and is set in 13½ acres. Though we did our own thing, there are walking tours throughout this cemetery, which is seen here as a major tourist attraction.

We stopped off after the cemetery visit for a swim at our sister hotel, before returning to eat our salad. We are out for dinner tonight with Trevor and Gill so had our feet up for a couple of hours as well.

We got the call to say they had arrived and agreed to meet for a beer opposite their hotel.   With all the hotels in this vast metropolis it was obviously deemed we should meet as our hotels are one street away from each other!!! Having just arrived they 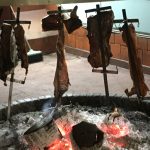 Meats being bbq, you can get anything you want here

hadn’t booked anything so we went to a restaurant both our tour guides had recommended as one of the best Parrilla restaurants in the city. Again good fortunes smiled on us, the restaurant was about 5 minutes walking from our respective hotels.

We all enjoyed the usual Argentinian fare, ½ a cow apiece washed down with copious amounts of Malbec accompanied by a lot of catching up. The last time we met-up was when we were barging along the Thames, September 2016.

We all waddled back to our hotels hitting the sack around 0100hrs.