We docked around 0900hrs and as we weren’t on a tour we didn’t rush too much. After a fairly light breakfast we left the ship, boarded the port shuttle to the terminal and made our way out. It was total chaos outside, apart from the Q V another, larger cruise ship had also arrived and both sets of guests were exiting the port together. To exacerbate the situation outside the port, being too far to walk, we were all forced to get a taxi or a taxi shuttle bus.   Additionally being a Sunday the main town was closed, so apart from a tour, the only place to go was an area called the “Hip Strip”, a tourist rip-off area; still like sheep, we had no choice and went along.

$15 lighter, we were dropped off at Gloucester Avenue, known as Hip Strip, a street with tourist shops all selling the usual tee shirts, dresses, nick-knacks and of course, Rum. This street runs parallel to the beach but the only way to get onto the beach is by paying, not that that mattered, as we didn’t have our swimmers with us. Walking away from all the hubbub, further along we got talking to a taxi driver and we agreed to 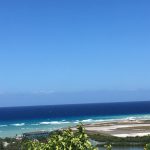 Our view from ship

go with him on a one hour scenic tour of the area, but only after we had found some internet. “No problem’s” he said, “follow me” which we did. Across the road he introduced us to a shopkeeper who had free Wi Fi so we caught up to date. Once we had finished, we crept out, as we didn’t want to buy anything from this shop, oops!!!!! Our taxi driver was still waiting so in we got, and off we went.

One can’t do too much in an hour but we got a feel of the place, he showed us the international airport and explained that the old road around the Island was cut to extend the runway to enable “Concord” to land; then Concord was scrapped. Next we drove around the local equivalent of 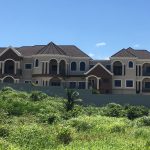 One of the posh houses

Hollywood’s “Beverly Hills”, the big houses, where the wealthy come to escape the winter. We were then driven around areas where “normal” people are living, and then into the city centre. 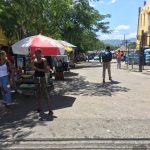 The first thing to strike us was how busy it was. We were given to understand at the dock entrance that the city centre would be closed down, being a Sunday and all that, but no, there were market stalls and many locals as well as tourists. 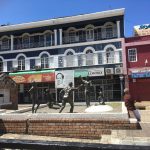 of Sam Sharp (1801 – 1832), erected outside what was then, the courthouse. Sam Sharp was an educated and well-respected slave who fought for freedom and organised 60,000, of the 300,000 Jamaicans slaves, to join in a general strike late in 1831, just at the time when the sugar cane was ready for cropping, hoping the plantation owners, wanting to protect their crop, would capitulate, but they didn’t and Sam Sharp was captured, tried and executed in the market square in May 1832. Sam proclaimed on the way to the gallows, “I would rather die upon yonder gallows than live in slavery”, and in 1975, he 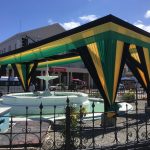 The fountain was where the gallows were

was proclaimed a hero.

Though Columbus founded Jamaica in 1497, the Arawak tribe had populated the Island for the previous 500 years, at least. The Spanish were disappointed there was no gold etc., but they did find the island to be fertile and set up their colony but following the Pope’s decree of splitting new discoveries in the world equally between Spain and Portugal, other nations took umbrage and at this time Oliver Cromwell sent out troops out to take this, and other islands for the British.

During the 18th century, Jamaica was the world’s largest producer of sugar cane but when slavery was abolished, the industry declined.

Though it was still early when our tour was completed, we were very happy we had taken it, and now we were back on board and decided afternoon tea was the order of the day.

This evening’s show had a rather interesting twist. “John Joseph” was an American comic, whose claim to fame was he toured with Julio Iglesias for 10 years. Naturally he told numerous jokes and stories but during all this he was bantering with several people in the Audience; in fact we thought he had not only picked on them, but he un-mercifully kept on, and on; kept repeating the facts he had gleaned from them, un-fairly we thought but then, at the end of his act, he picked up his guitar. He made up a song incorporating everything he had been told by these people; quite extraordinary and very entertaining; now we understood why he kept on at them.

We now had another day at sea but the highlight of the day was a variety show put on by the crew raising funds for the charity “Help the Hero’s” and we thought in one or two instances they were better than some entertainers. It was an 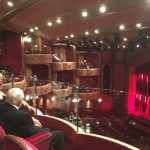 The theatre on board

hour of fun and laughter, excellent and we hope they raised a lot of money; I wonder if we will 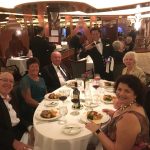 Our dinner table, and what a great crowd they are

Tonight was another formal night and after dinner 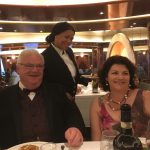 our entertainment was the “Barricade Boys”, singers showcasing famous male voices from 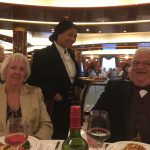 international productions and the Hollywood film of Les Misèrables. They were very good singers and Christine thoroughly enjoyed them, I on the other hand wasn’t that impressed, good singers yes, but not that 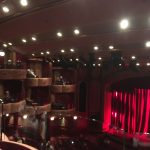 Everyone enjoyed the show except Geoff!

entertaining, in my view!!!!! This was followed by a visit to the Golden Lion pub for a 60’s quiz night, thinking we had sufficient knowledge between us to cover that era; wrong. There were some very obscure questions and all the low scores around the room reflected this; still the beer, “Doom Bar” was good.

Tonight was billed as the roaring 20’s in the Queens room, which we now walked to, only to find the roar was more of a squeak, so didn’t hang around and went to bed.

This entry was posted in Jamaica. Bookmark the permalink.