We left Foxton Locks junction Tuesday morning and headed to Market Harborough, 5 miles away; no locks but one swing bridge which we were told was rather heavy to swing.

We came up behind another boat who fortunately had already opened the bridge and to our surprise waved us through, lucky Christine, but 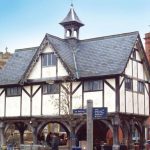 as we passed through the “army” from the boat we had just passed told us to keep going, wonderful. 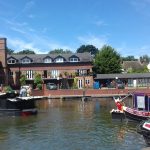 Arriving into the basin we were spoilt for choice until Christine visited the office, our choice then became limited to a couple of finger pontoons on just one side, still, after reversing stern-to, we tied off: we were 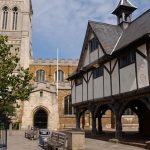 We used our time wisely, we scrubbed the roof then washed down the boat and got the touch-up paint out.  No matter how careful we had been travelling around the network, there were always times when a bump or scrape was unavoidable. 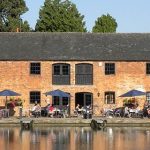 We also came into a marina as we had to leave Meg A Star overnight near a train station; Market Harborough fitted the bill. 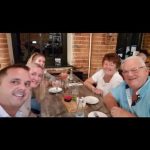 Friday evening, and Mark, Paula, and Ashleigh came over and we had a very 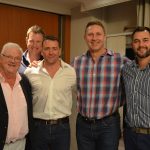 Geoff with the professionals

enjoyable evening, dining at the Waterfront Restaurant overlooking the basin. 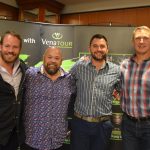 Tour.  After booking into our hotel we meandered down to the bar where many of the “tour” had already assembled, a couple of hours before “kick off”.

It was a very enjoyable evening meeting up with my tour companions, re-counting the many stories, and all looking forward to the next Lions trip to South Africa in 2021.  As with all these rugby get togethers, there were three guest speakers, Thinus Delport and Johan Ackermann, retired Springbok players and Matt Perry, retired Lions and Bath player all “interviewed” by Gareth 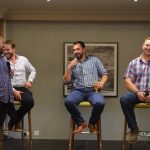 “Cooch” Chilcott, another ex Lions and Bath Player.  Apart from some interesting insights into touring, they were a hoot, couldn’t stop laughing.  There was a super buffet put on, enough food to feed an army, and a disco later in the evening.  It was an excellent evening and the most important success to come out of this was Christine telling people she would join me on the 2021 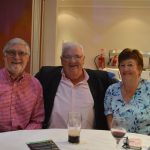 Geoff, Robin and myself

We returned to MH on Sunday, though later than expected thanks to the total incompetence of Network rail.  Due to maintenance on the line, a shuttle bus was taking passengers from Derby to East Midlands Parkway, a simple 10 minute drive but no, we had a clueless driver who didn’t know the area and due to missing the turning off the Motorway, took us on a scenic drive; a 10 minute journey only took just short of an hour.  As expected there were 50-disgruntled passengers and the Network Rail representative just shrugged his shoulders, he couldn’t give a “####”.

Tomorrow we leave after a rather enjoyable visit to a buzzing small market town that seemed to cater for everybody.