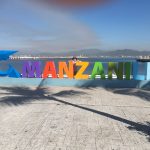 After breakfast we disembarked, we realised quickly why we were not stopping here long, Manzanillo is located on the Pacific Ocean and is the busiest port in 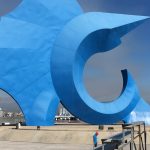 Mexico. It is the largest producing municipality for the business sector and tourism in the state of Colima. The city is well known for deep-sea fishing, it is also known as “Sailfish Capital of the World” it has since 1957 hosted important national and international fishing competitions.

We walked along the promenade, and headed for the town, well

One of the nicer areas

actually to me it was more like a shanty Village, with tiny shops, there was only one main high street, we were looking for batteries which we found, we also went to the bank to change some dollars into the local currency, to make it easier and cheaper to buy things. Having walked around, and not really found anything to see, we

Quite a poor area

meandered back to the boat, we did not even bother with coffee, as everywhere looked very dirty, shabby and not inviting. I was worried about getting a bug ? so we went back on board.

We could have gone on one of the trips, but we have seen turtle farms in Galapagos which were brilliant, don’t think they can compete with that, also they had beach and shopping excursions to see where Bo Derek and Dudley Moore made the film 10, as we cannot really buy anything as we are up to our limit on baggage plus when we get home we wonder why we did buy in the first place, for a mere $100 we decided to stay in town.

Back on the boat, we grabbed a coffee, I caught up with the washing, we took a swim in the pool, which is now lovely and warm, we went in the jacuzzi with no bubbles, relaxed until time for dinner.

The show tonight was Tom Drake, he is an American comedian, we were a bit apprehensive about going as we have been before where all they did was make American jokes, this guy was good, he talked about all the different nationalities, of course the British are gentle people who love queues, mind you I think the gentle is changing these days! We both enjoyed him and will go back and watch his second show.