Manaus, Head of the Amazon 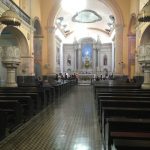 We were up early this morning; well, early enough to get up on

Meeting of the waters

deck and see where the two rivers, Rio Negro and the Rio Solimoes meet. Here again we have the phenomenon of the muddy waters of the Rio Solimoes and the clear water of the Rio Negro Joining, and as we passed you could see there was a distinctive line between them. To the Europeans and North Americans, the Rio Solimoes doesn’t exist, it is still the Amazon but to Brazilians, this junction is the actual start of the Amazon. Manaus is 900 miles from the mouth of the Amazon and still it is very large with big ships not only coming this far but also continuing up the Solimoes!!!

After breakfast we had agreed to meet up with David and Christine, our friends form Croydon, and walk into town 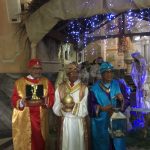 together. David, being the studious sort was appointed chief navigator so off we went. Dotty our cruise director had said on numerous occasions that it was most unsafe outside the port gates and “you must” get a taxi to the centre. We walked out of the port gates and the first thing we saw across the road was the Cathedral of Our Lady of the conception, one of the must see things. Fancy getting a taxi to just cross the road!!!! Being Sunday the church was full but what fooled us were the three kings, normally this is on the 6th I think, but they were here today.

Once we left the church we headed out to find the Opera House, 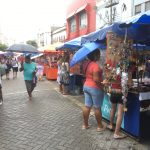 Walking around market place in the rain

we walked up this very vibrant street with stalls selling all manor of things and street food; everybody was happy, families were there and we waited to be mugged, but nothing happened. We arrived at the top and saw the Opera house. This very ornate Victorian building was commissioned by the rubber barons, in 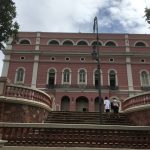 1886 and was finally completed 12 years later in 1898. The theatre was designed in France and everything, bar the wood, was imported either from France, England and Italy. In its heyday it must have been magnificent, it certainly was the social centre of Manus though it did fall into disrepair in the early part of the 20th centaury when the rubber wealth of the city dwindled away.   Today the theatre has been refurnished and apart from the wood floors, Stage and seating, 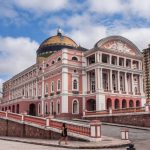 much is still original. It cost us 10 Reals (circa £2.50) per person for a guided tour lasting 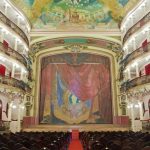 well over and, very worthwhile.

I mentioned the Rubber Barons; in 1850 rubber was discovered and harvested from here and there was much wealth around, but by the end of the 19th century, other parts of the world were producing rubber in vast quantities and therefore cheaper so the bubble burst and the area went into decline.

After the tour a beer was called for; we also met up with a couple of Canadians from the ship who joined and the six of us had a snack and a couple of beers when the waitress told us to move inside as it was going to rain. 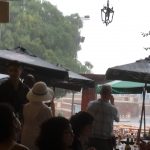 Absolutely tipped it down, a lot worse than Spain

We thought we knew better saying a bit of rain wouldn’t hurt us but she was insistent so we did as she said. 5 minutes later it rained, and it rained it was what one would expect in a rainforest region, stair rods coming straight down. This downpour lasted for quite a long time, several beers long in fact!!! Eventually it stopped so off we went and walked back to the ship. By this time of course all the stalls etc., had gone and the street was very quiet and remembering what Dotty had said, we kept our wits about us but no, again we weren’t mugged or accosted; oh dear Dotty stop causing un-necessary panic amongst your guests.

Back on board after the usual 3 s’s the 6 of us enjoyed a meal together followed by the show; not our cup of tea I’m afraid so we left and returned to our cabin.

We are overnighting in port so will go out tomorrow again.

After breakfast we met David and Christine and headed out to 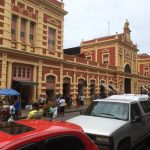 the Municipal Market, wow what a market. Firstly the building was quite amazing and had separate 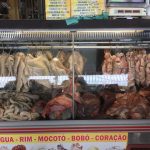 Meat narket, they had tongue, intestines and livers in this cabinet

halls. We walked through the meat hall first and noted some very interesting cuts but I must say most meat was kept in refrigerated cabinets’; next we went through the clothes, arts and 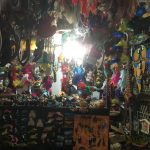 Lots of arts and crafts stall 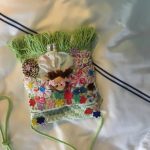 to keep her ‘phone and glasses in. We then progressed into the fish section but we were disappointed as we arrived too late and they were washing down; oh well, that’s life. We meandered on past numerous other stalls etc., and suddenly smelt a rather pungent fishy odor. We followed our noses and walked into a vast fish market, this market was not part of the Municipal Market complex; perhaps 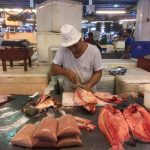 Filleting the fish, amazing to watch

the rents were too high there so the fisherman had their own shed. We were amazed at the variety of fish on sale, all fresh water fish from the Amazon and we stood transfixed at how they filleted these large fish, the care and skill they had was a 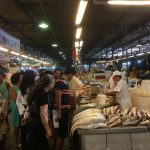 So busy, so many varieties of fish

delight to watch. Naturally as we walked through this area teaming with people we were conscious of “Dotty’s warnings” we christened them the “badlands” but again, no issues: come on Dotty, get your facts straight and stop telling everybody “fake news” 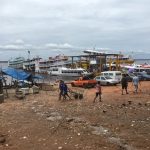 Seedy part of town, we did keep close here,

Having had our fill of this vast and busy market we jumped in a taxi and headed out to the big shopping mall. Not that we particularly wanted to visit a modern shopping mall but we were advised it was worth seeing as it was built around some protected rainforest.

We arrived, walked in and debated where we were, Lakeside, Essex; Blue water, Kent; Florida; Hong Kong etc., etc: They all look very similar with the same brand, still, not put off we hunted down the rainforest part. After circumnavigating the place with no luck, we asked, but with zero Portuguese knowledge and no one speaking English there, we had trouble getting directions but, we persevered and eventually got pointed in the right direction: what a disappointment met us upon arrival, yes there were a few specimen trees between the car parking spaces and that was about that; again fake news! Anyway we split for ½ an hour as I needed to buy a new pair of shorts and once accomplished, met up for a coffee and a “something” we know no what, but had to try one. They 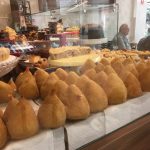 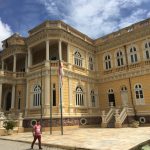 cultural centre, but closed on a Monday, still it was a beautiful house and in its heyday, standing alone in its own grounds must have been spectacular.

Christine and I then got a taxi back to the ship and our friends elected to walk, well they are younger than us.

After dinner we had Jamie Michael Stewart, he was excellent again and tonight he concentrated singing Frank Sinatra hits.

Off to bed as we start the trek back down the Amazon this evening.