We are gradually getting acclimatised, but I was still awake before the

alarm went off at 6.30 am, so we both got up, had a lovely lazy breakfast, and were ready to go by 7.45 am, we were collected from the Hotel and delivered to the train station in 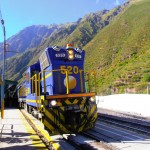 Ollantaytambo, another busy station, but very organised, we were told that our train was after the one waiting in the station, so we sat and watched it depart, shortly after ours arrived and we boarded, trouble was Geoff had only given me one ticket, and he had already boarded, but they let me on, then of course he had no seat number, so he took someone else’s seat, after a 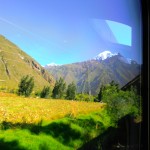 few words they agreed he could sit next to me.

Lovely comfortable train, with everyone having tables, and the views on the way to Machu Picchu were very spectacular, the river runs 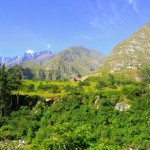 alongside the railway, and some of the mountains were covered in snow.  Whilst travelling the 90 minutes they served us with a roll, fresh fruit, and a drink, very civilised. 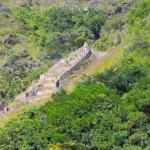 Inca settlement in the hills

On arriving at Aguas Calientes (hot springs) we met our guide named Sonia, she arranged for the bell boys to take our baggage to the Hotel where we were staying tonight. 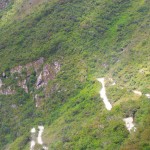 Hair-pin bends on route to the Inca trail

We then walked to a bus which took us to Machu Picchu it was a 25 minute single track road, where at certain points other buses could pass,  8km of road that had lots of hairpin bends, with cobbles in most places, very bumpy, and we were glad to get off. 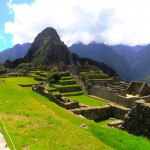 Young Pincchu in distance with urban houses in front

A visit to the famous archaeological site, no one quite knows the real history, but most agree it was built in the mid 15th century by the inca emperor Pachacuti. Inca legend relates that Pachacuti ordered the 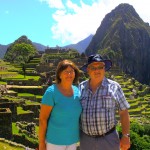 construction of Machu Picchu to celebrate the defeat of a rival ethnic group called the Chancas.

The city was abandoned when due to the 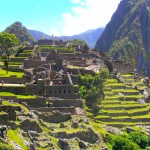 Amazing site, the way they managed to build all those years ago

It was a fascinating trip, and although history goes over my head most of the time, I found it interesting.

We went up and down the steps, wandered through the houses, temples warehouses and central square, which made up the lost city. 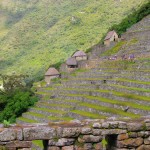 Farming area with store rooms beyond

Marvelled at the way stones had been carved to fit, how did they do this all those years ago.

Later we left the site, and had lunch at the sanctuary restaurant, Pan Pipes were playing, before descending in the bus again, we then slowly walked through the town, until we arrived at our Hotel Inkaterra.

We were given our room which is very nice, but so many steps to get up to it, poor Geoff was struggling to breathe at the end, we tried to change rooms, but the Hotel is full, so we will just have to take it easy. When unpacking Geoff found his train ticket!!!

We did not feel like anything else to eat, with the high altitude, we are having trouble digesting food, and breathing, although at present we are only 2000 meters above sea level, tomorrow we will be 3800 meters, so we will have to take things easy.