Luxor and the Valley of the Kings

Another 4am start and of course several temples to visit.
A good nostalgic flight in a propeller aeroplane followed by a harrowing drive in our private car, yes VIP again; to the Valley of the Kings. 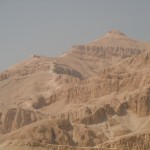 Valley of the Kings

We walked into 3 tombs and were amazed at the original colours still clearly visible on the walls after about 3,500/4,000 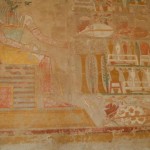 Original paintings circa 3500 BC

years as well as the size and weight of the sarcophagus These were made of a size that would just get through the entrance tunnels, what exact engineering. Of course there are numerous tombs buried into these mountains, many still to be discovered, fascinating.

Next stop was to watch how alabaster was taken from the basic rock and hand carved into beautiful vases, lights, drinking vessels and anything else you 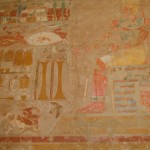 Original paintings circa 3500 BC

can think of, again fascinating. Naturally the object of this visit to the factory is to buy something, which we did, our second significant purchase!! 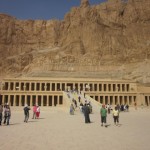 Off then to Al-Deir Al-Bahari, King Hatshepsut’s Temple. This King actually was a woman but to keep the throne, she had to be seen as Man, can you believe that!!! Enormous temple built into the mountain side but this was not her tomb that was the other side of the mountain in the Valley of the Kings!
Lunch followed aboard a boat on the Nile, excellent, far better than the TGI’s we went to in Cairo. 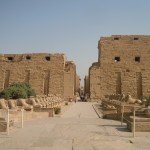 Next we drove to Karnak Temple, the largest temple in Egypt that covers some 68 acres and spans several hundred years.  Again we were blown away about the great size of the columns and Obelisks, the latter being carved out of one piece of rock

several hundred kilometres south of Luxor and then transported to this site; and we think we are clever these days! This temple was also a featured in the James Bond film, “The Spy Who Loved Me”. 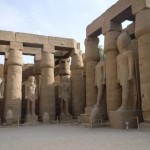 A last visit to yet another temple, “Luxor Temple”, and following this we asked our guide if we could get a cup of tea, but not in a western type establishment, a local Egyptian place. 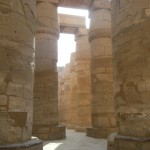 We were taken down the usual alleyways and in the middle of the souk came across this very local café and had Egyptian tea accompanied by a smoke of the water pipe. 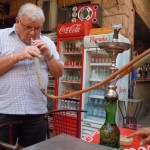 This was the first time either of us has smoked this bit of kit, I struggled to suck hard enough to draw the smoke through but Christine managed it quite well; naturally our guide did it perfectly however he was worried in case we reported him to the tour operator as they have strict instructions to stay on the designated (safe) tour routes, and we went off it!!!
Again we had a good return flight in that propeller plane, and our car was waiting for us at the airport. After a late dinner we hit the sack, exhausted. We had a great day and the weather was very hot, we can’t imagine how tourists visit these tombs etc., in the heat of summer, this time of the year was hot enough and we went through several bottles of water.