No rush today as our only plan is “Sunday. Coffee Morning”; got to keep the tradition going!!!! And a trip into Javia, but first breakfast 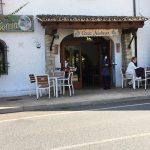 and “Marr on Sunday”.

We hit the road about 1100am and stopped at the in “Casa Aleluya” in Xaló, (Jalón) in the next village for coffee but to my horror they’d run out of Soberano; catastrophe, and their 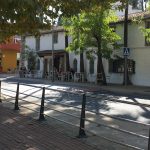 Back to the Good old favourite

substitute didn’t hit the spot, so we left fairly quickly and headed to Xàbia (Javia).  Not too sure how, but Tom Tom took us, (probably the most direct), along another of the very twisty and narrow roads across the mountains, again littered with cyclists; poor ChristIne!!

On arrival we didn’t mess about when we arrived, we headed to the old historical town, far more interesting with the special atmosphere narrow streets, passages create and naturally bars spilling 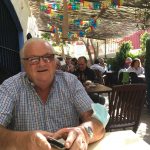 out.  Parking was a bit of an issue as all signs pointed to an underground “pay” car parking; hmmm, not for us!!! But we found a free slot and walked into the maze of of passageways.   Where the sun shone through it was nice and warm, but where there was a lack of sun it was quite chilly, still we persevered climbing up and down 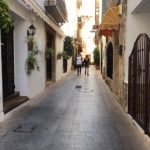 Xàbia has quite a history stretching for centuries and had been fought over several times and in the 16th century they built a wall around the place as the town was regularly raided by pirates from North Africa.  As we drove, we could see Remains of the wall but once we started to read 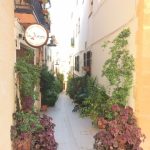 about the place, we find we have been cheated, the remains are not remains, they are replicas!!!!

As we have decided today is our last day in this region, we went out to lunch, again!!!! And found a rather nice bar/restaurant in 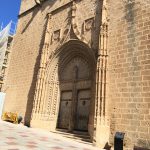 the old town where we had some excellent food and beverages, far to much but hey, we can diet from tomorrow!!!

After a couple of hours and fully replete we headed down to the port as ChristIne wanted to reminisce by to seeing where she had sailed into sometime in her past. Job done! 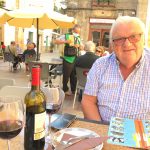 Back on the wine

We were a little more careful when we loaded Alcalali into Tom Tom this time and returned on “proper roads”, around the 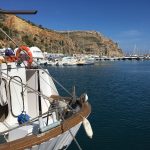 We were back in good time for our Sunday-night family quiz after which we settled down for a night around the television.   Tomorrow we head back home???