Up early, the boat has berthed in the Port, and we are all packed ready to go, we went for breakfast, and met up with Jan and Mike said our good byes, and then disembarked, it only took us twenty five minutes to clear customs and we were free, the only problem was we had a taxi booked for 11am and it was only 9am, so we tried to cancel the car, and we got into a taxi. We reached the Queen Mary, and I was a bit taken back, it needs a bit of updating, everything looks very tired. We booked in, dropped the luggage off, then had a coffee at Starbucks. 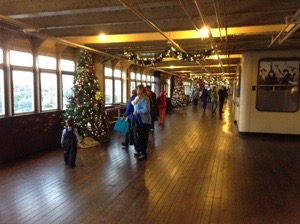 we wondered around the ship, went to the tour operator, thinking we could book something, but no luck, oh dear what have we done!
We then decided to catch a bus downtown Long Beach, to see if we could hire a car, or get a tour into Hollywood, well the first surprise was that they have a local free bus that you can take, so we hopped on, didn’t have a clue where we were going but decided to just go with it. First stop was a little tiny village, which was on the waterfront, we didn’t know whether to get off or not, so we stayed on, as we were leaving we saw an “Tourist Information Booth” so the next stop we got off, and walked back, it is so pretty around here, little tiny boutique type shops, with lots of restaurants on the waterfront. 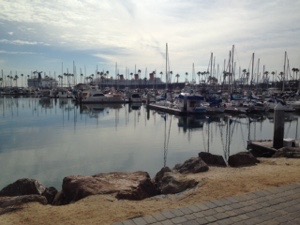 . We could see the Queen Mary in the distance, and enjoyed walking back along the waters edge, we stopped at the booth, and Pat was so helpful, she told us about a day tour going to Hollywood, told us about the trains for when we leave here, and also where the local Walmart was.
I need my nails done, and although it is a Sunday we took a chance, the bus driver told us where to get off, and we made our way to Walmart, but they didn’t do them there, but they directed me to another shop, and within two minutes I was having them done, so another job sorted. We then went to the rail station, but couldn’t find anything out as it was closed for maintenance. Still we know where we have to go.
We started walking back, but Geoff found an Irish Pub so we stopped for a Guinness or two, then walked onto “Outback” we used to go to these restaurants with Jane and Dave, but the Essex one is closed 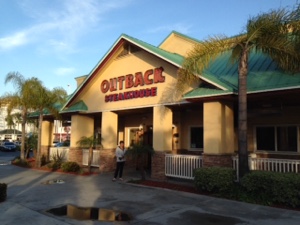 We had a lovely big steak, as we have time to digest it before going to bed, as it is only five o clock, we caught the bus back to the ship, and just crashed out, it’s been a busy day.