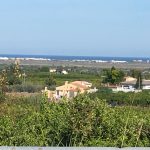 After a leisurely breakfast we decided to stay local and visit Pego and Parcent, both recommended by our sailing friend, Rob.

Pego being so close we had assumed it was in the same valley as Alcalali is but we were wrong. To get there we had to cross into 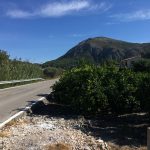 another valley along what was at times quite a twisty but fortunately not to long a mountain road, though being Saturday all the cyclists were out and about which again caused white knuckles to be had on the passenger’s side of the car.

As usual, upon arrival we drove around to get an appreciation of the town, quite quaint in places but fairly busy and many narrow streets, so finding somewhere to park was difficult. We finally found a lovely tree lined open square surrounded by buildings with cars parked everywhere and being Saturday, families strolling and 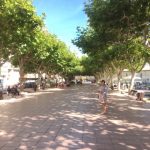 enjoying the midday warmth. After driving around for quiet some time we eventually managed to squeeze the car into a back street space and headed back to the tree lined square where we sat at a table in one of the many bars to watch the world go by and enjoy a coffee etc. It struck us just how much social life was getting back to normal, though all the people were doing the right thing; wearing their masks and social distancing, even the young were behaving, which was very reassuring to witness. 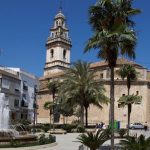 Pego’s history can be traced back to the Bronze Age though more recently it was populated by the Arabs until around 1244 when it was conquered by the James1 of Aragon who re-populated it with peasants from Catalonia. Today there is a population of around 11,000 People. One interesting fact; in the Middle Ages it was wetland area and rice was the main crop grown, 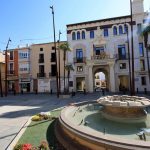 but no sign of that now, it is oranges etc., that one sees.

Sitting in the sun watching the world go by enjoying our morning coffee break got so extended that lunchtime was upon us, so decided to stay where we were and have another tapas lunch out, naturally with another bottle of the delicious local wine; At this rate when we get back we will have to go a starvation diet!!!! 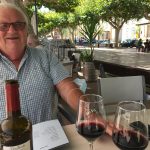 After several hours of chewing everything over and putting the world to rights and getting nowhere, we left, found the car and headed towards Parcent, stopping at a supermarket on the way.

Parcent is only a few Kilometres from Alcalali so back along the twisty roads. The road actually by-passes this village, just as well as the streets are so narrow. Driving around the place look deserted and the streets being so narrow, at one point we had to manoeuvre back and forth to get round the corner!!! At this point we decided there was nothing doing, we didn’t see any square, bars, 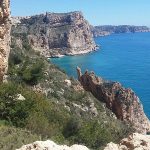 restaurants etc., it looked to be a “dead-and-alive” place, not too surprising as it only has a population of 1,000, so back home we headed.

This afternoon was the Heineken European rugby Cup final and fortunately we arrived back in plenty of time to watch on Channel 4: good planning or what!!!!! It was the most nail biting, enthralling, edge-of-the-seat match I think I have watched but in the end Exeter Chiefs finally put the French side Racing 92 to bed. Exeter is not my side but this occasion they had my support to keep the cup with an English team.

For dinner tonight we chucked a couple of trout on the Bar-bee, very 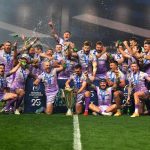 nice and followed this by a night in front of the TV.