Llangollen back to Baddiley Locks, via the Montgomery Canal

Having had a lovely couple of days in Llangollen we now have to retrace our steps,we booked into the Montgomery Canal, as they only 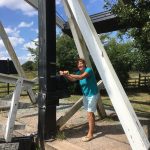 take a few boats each day, and also you can only arrive between 12-2pm. We were in plenty of time, having travelled most of the way yesterday.
Leaving the junction at Lower Frankton, we immediately had a staircase of locks, with several volunteers and the full time lock keeper, 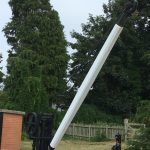 so we quickly moved onto the tiny canal, a wild but peaceful Canal, 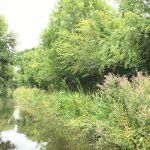 through open fields, with the Welsh hills in the distance. The canal was mainly agricultural, apart from the limestone, it existed to serve the farms and villagers, through which it passed, and so was never really profitable. We could only travel seven miles to Maesbury Marsh, which was a shame, as the canal eventually will go down to Newtown, some of the canal has 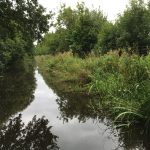 Some parts of the canal were again very narrow

been restored, but a lot is waiting for more funds, before they can complete the twenty miles.
We moored up for the evening, and walked to what is now the end of the line, back on board, a quick shower then off to pub for a superb meal at the Navigation.
As we are under time constraints we left early 8.30am, we had to do a swing bridge, and turn the boat, I was praying no one would want the bridge closed, whilst I was waiting for Geoff to come back, we were 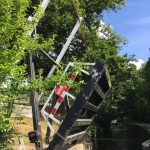 lucky, another poor lady had to open and close three times! We meandered back to the staircase of locks, this time we had to wait in a queue, eventually we arrived back at the junction, stopped for lunch, then headed for Ellesmere again, where we walked into the town, but having seen so many lovely places, we were disappointed here, so a quick shop at Tesco and back on the boat for dinner. 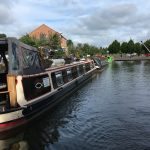 We left Ellesmere quite early as we have arranged to meet Leisha and Dave tonight at Grindley Locks, so foot down, well we did manage 3 miles per hour as some point, we had twelve miles to do,five swing bridges, which are horrible, and five locks, and we arrived in plenty of time to shower and change, before they arrived. We had a couple of drinks on board, then off to the Horse and Jockey, a lovely pub, with a very different menu, which included many Mediterranean dishes. A good time was had by all, except poor Dave who was driving. 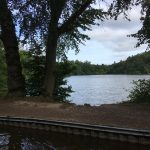 We have been rushing to pick Pat up at Aldersley Junction, but we now realise we cannot get there in time, so we are meeting at Nantwich instead, that’s better no need to rush.
A lay in followed by a quick walk up the locks to empty the pooh cassette, followed by a lovely cooked breakfast at the cafe at the top of locks. before heading to Baddiley Locks, where we stopped for a quiet evening.