Friday was “clean-up day” change beds etc., before we could venture out. We also had “Troy” our car rental man coming round as we want to extend the rental ‘till we leave mid March.   When we originally booked he gave us a very competitive rate and fortunately we kept that rate for the rest of our time here; so glad I didn’t pre-book a car at the airport, it would have cost a fortune.

Once the chores were done we got onto those blessed ESTA’s again.  When we had them printed they didn’t look right, they came out landscape not portrait though and after talking to the US consular, we were told they we’re approved.   Still uneasy we’ll probably have them re-printed direct from our I pads where they are.

Whilst “I the mood” I decided I had to think about the documentation for our cruise back so started that tiresome task, but have to say it was a doddle; why couldn’t the US web site be so easy.

Whilst at the supermarket the other day we spotted a bottle of Italian white wine with a “Waitrose”  label on it at a very low price, so tonight we tried it and was quite surprised, it was lovely and light, reminiscent of Frascati, the bottle soon went.   We’ll get some more of that!!!!

We had a terrible night, the first we’d had whilst here.   Poor Christine was suffering delayed action from the bouncing and bumping we went through on the two trips on the Barbuda Express, and being the caring sort I am, stayed awake as well!

When the car rental chap delivered the car he forgot an-updated licence to cover the extra period so “promised” to be here at 0909hrs with it, he didn’t.  Anyway with Christine not feeling at her best, instead of depositing her at the Pigeon’s Point Beach, she elected to remain at base; so after ensuring she had everything she needed, and was aware the licence “may” turn up, I was off

Two matches to watch, a terrible performance by Scotland and a miserable defeat for Wales I head back to find Christine hobbling around. Asking why, the answer flabbergasted me; she had gone to bed after the licence had arrived and was woken suddenly with a bump, she had fallen out of bed and twisted her ankle in the process: Poor Christine.

We wiled away the rest of the day was quietly and I cooked, I hope she doesn’t get food poising on top of everything else!!!!! 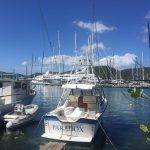 Sunday and it’s England V Wales so the two of us headed to Cloggy’s again.  Arriving I got  chatting to a couple at the bar who looked very chirpy, it turns out they are also Exeter Chiefs supporters and after discovering we followed Saints, took great pleasure in telling me they had “thrashed” Saints in the premiership match earlier this morning. A good start before an England game!!!!  If that wasn’t all, we sat 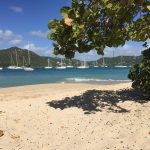 next to an Irish lady during the game who naturally took quite a lot of stick.  England won and that’s al that mattered.

were numerous yachts at anchor. 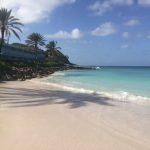 Monday and today Longbay beach number: 13 of 365 is our destination down in the southeast of the island, though on the Atlantic side, the bay is sheltered by a point and it has a reef across the bay.  We parked under some trees right next to the sand, took our chairs, picnic cool box etc., and 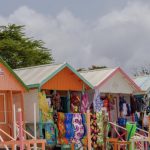 found a very nice shady spot about 5 meters from the shoreline.

The highlight of the afternoon was walking into the “Pineapple resort” to get a drink.  When the bartender gave us our drinks I asked how much only to be told this was an all inclusive holiday resort, and then twigged we weren’t guests.  With the drinks 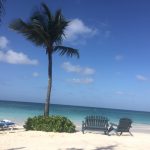 made and poured she was in a little pickle, so she then told us to take our drinks and go away from the bar, naturally we didn’t give her a hard time; free drinks on the beach, excellent.  On the return journey we stopped off at the “Devils Bridge”. 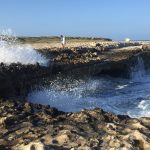 Devils Bridge is formed in the limestone rock, bashed by the Atlantic’s waves crashing into it for hundreds of thousands of years and in the process has formed geysers and blowholes where the water shoots through.  The 2 world name is interesting;  “bridge”, because it actually forms an arch or bridge, 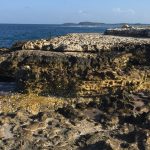 “devils”, because local myth suggests slaves jumped off this bridge during the period of slavery and the myth goes on to suggest the “devil” claimed them

Back at the ranch our evening was much the same as usual but en route went into the supermarket to buy some more of that “Waitrose Light Italian wine” but, too late they’d sold out, bugger!  Never put off………………. instead there was a Waitrose “Chilean” white wine that we bought and tried, it was nice enough, but unfortunately not up to the standard of the Italian one!

After much debate we decided to go to OJ’s, a restaurant on “Crab Hill beach”, number 14 of 365, as we’d heard good reports about it. 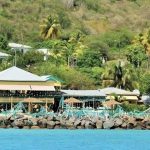 Stopping off at Jolly Harbour on the way ensured we arrived at Lunchtime.  In spite of the recommendations we’d had, we still looked this place up on “trip advisor” and as usual found comments right across the board, from the best place to the worst place on earth!; no change there so went to 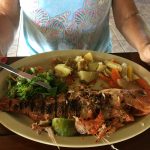 My red snapper was enormous

form our own impression.   We left after a couple of hours having enjoyed very good food, a good assorted drinks and wine menu, and excellent service with their own car park. We wandered about the beach but 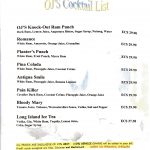 Might try some of these cocktails behind our bar

Unfortunately Crab Hill beach didn’t do a lot for us so dressed and headed over to Carlisle bay for our daily exercise before returning.  We had eaten so well at lunch, we couldn’t face anything further to eat or drink!