Up and out walking the dogs, after another stormy night, thunder and lightning, hate it when it is like that, not sure how well insulated the van is. Still we survived another night, and Bella had to have another cuddle. 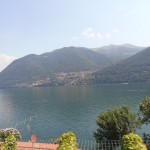 We managed to leave the site by 9.15am having had breakfast,

we have about 80 miles to go, which is not far, but some of the roads are so tiny, they had traffic lights on both ends of the village, and only one way could go at a time, it was very tight even then, we clipped the mirror of a lorry that was parked on the side, and coaches and us struggled past cyclist, very nerve wrecking, glad I was not driving.  Geoff does very well, weaving around these 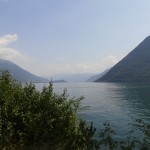 Views of the Lake

narrow lanes, I just try to sit and be quiet!!

We eventually arrived at the site, and found our spot, to be told we could not go there, as it was promised for someone else, so we had to move, but tomorrow we are going back, it is a better spot, plus we have the shade of the trees, which we have not got now.  It is 39 degrees outside, and when we plugged in the air-conditioning, it kept blowing the fuse, so hopping tomorrow not so many on one plug. Apparently they have the electricity set, so that it keeps the van running, but nothing else, so no iron, no hair dryer etc., 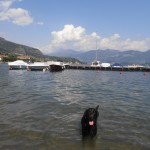 Geoff took me out to lunch at the site, we had meat platters with parmesan cheese, that was lovely, good to relax, we took the dogs for a wander along the lake, and as soon as Bella saw the water she was in again.

Lake Como is lovely, I just wish Jane had been able to join us, it is amazing scenery, the mountains contrasting with the lake, with lots of things going on.  We walked along side the lake, looking at the restaurants on the waterfront, we continued to a Hotel, which had a beach with lots of people swimming,it also had three sea planes, which 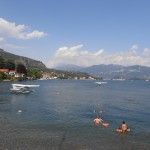 we assume you could hire, we paddled and the dogs swam, Sooty showing everyone how clever he was diving for the stones.  On the way back we stopped at one of the lakeside café and had a drink, then we went into Lenno, which is where we are staying, a very tiny village, which has only a few shops.  The most important thing is a Bank, as everything is cash here, no cards, definitely a black economy.

Back at site, we changed, then went for dinner, we had a chateaubriand, which was amazing, cooked to perfection, this site is family run, and the lady in charge is out to make as much money as possible (don’t blame her for that) but we were all a bit squashed, hopefully when we move, we will be better off.  Still not as bad as the South of France!