Friday and wow, we could wake up gradually and linger over breakfast, no early start, nowhere to be today, but I admit the house has lost its buzz with the departure of Lee and Sarah, we miss them already as they rejuvenated us into 20-yr olds!!!

Apart from the above, it was a normal Friday, domestic duties, supermarket and a swim on a beach followed by a quiet evening trying to up-load videos and crib. 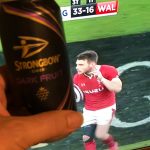 We had rain again overnight but morning back to normal and later we headed to “Cloggys” to watch the England V Wales match from Twickenham.   As usual Cloggys was pretty busy but we managed to get there earlier enough to get a couple of stools at the bar opposite the tele.   It was a tough game with many poor decisions from the New Zealand Referee, still in spite of being down to 13 in the last 10 minutes England beat Wales 33-30;, and by doing so lifted the “triple crown” trophy.

Immediately after we headed straight to our usual beach for our picnic lunch and a quiet afternoon, but unfortunately being Saturday, it was 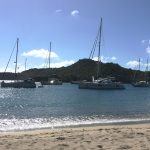 Sunday and I was off back to Cloggys for the Scotland V France game, and what a match with the Scots winning 28 : 17, excellent result and blows the championship wide open.

Back home we debated the Coronavirus again and the implications for us having just heard from “Princess Cruises”, again.  The understandable restrictions they have imposed on embarkation are quite severe and for any minor issue we could find ourselves stranded in the US as we only booked the cruise: the travel arrangements are ours, so not covered by Princess.  Anyway the decision has been taken and we booked flights back to UK on the 13th March and returning to Spain 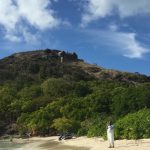 on the 16th.  A very sad end to our extended holiday, of well, onward and upwards, start thinking about what’s next!!!

Having made the decision we now have to set about consuming the food and booze stocks we have, rather more than we can manage I suspect, bringing our departure forward 13-days.  We also have to tick off the odd things we had planned to do, but not yet got round to them. 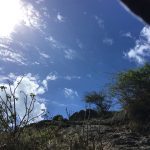 Couldn’t quite make the top

One such activity is to climb to the top of Fort Barrington, the fort on the south side of the approach to St Johns harbour.   Having been to the deep bay beach before we knew the way up to the top was arduous and hazardous but perfect for mountain goats but we had to have a go.  I know this is a concept we don’t have to deal with generally, but we failed, we got about half way up but then realised we needed boots or trainers, not sandals to get further up.   How the military climbed up “and” hauled cannons up to the top 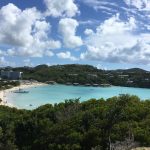 We did manage to climb quite high

amazes me, they must have been made with sterner stuff than us.  After the failure, we drowned our disappointment on the beach on deep bay, and looked foreword to tomorrow when we’re heading to Galleon Bay, hoping to snorkel with some turtles that are “allegedly” there!

Oh dear things aren’t going to plan this morning, rain overnight, dark clouds this morning and windy.  Under theses conditions we know the sea will be “stirred up” and visibility will be virtually nil so so didn’t actually venture out at all; there’s always 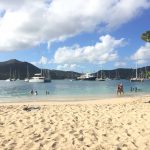 Oh dear poor Christine, she’s got a tummy bug today, no Coronavirus symptoms I’m pleased to say, but needed to stay close to-you-know what.   We had a packet of frozen fish last night, perhaps it was that who knows, but obviously the turtle beach was off the agenda, again!!!!, so the big pack was started as we stopped in.

Thursday and it’s our last full day in Antigua, and hopefully it’s 3rd time lucky and we make the turtle beach; the good news is Christine is back to normal and the sun is shining.

Today we had our last Mexican Pizza in Falmouth Harbour before 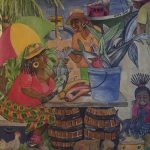 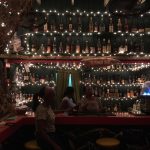 heading to Galleon bay for a last swim and maybe see some turtles, but alas no.  The water was rather cloudy and there were far more yachts anchored off the beach than usual and neither of these two things is inducive to turtles parading about.   Oh well we’ll just have to live on our memories from the times we swam amongst them in Tobago Cays.   Fortunately we enjoyed 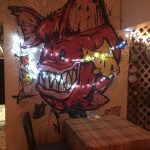 Tonight we celebrated our last night by going to Papa Zouk, which is a restaurant that specialise in Fish and Rum.  We had a really good evening, eating lobsters and drinking wine and rum, a fantastic last night. 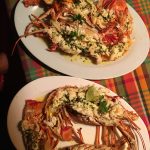 We fly out today but I did want to visit the Antigua and Barbuda museum so headed into St Johns only to find there was a children’s parade or demonstration, not too sure which in the town and to add even more confusion there was a “huge” cruise ship in.   The town was heaving and chaotic so parking was impossible and after a few attempts I gave up and returned to help clean up the cottage.

After saying our goodbyes to Clovis and Paul; the couple, who’s son owned the property and who “operated” the gate zapper each time we hooted, we headed to the airport.   With the Coronavirus uppermost in our minds we were glad to know the Virgin Atlantic ‘plane had arrived safely, and as it had to return to the U.K., we were assured of getting on board.  We think the ease in which we got our tickets was due to it being Friday 13th!!!!!!

The flight took off on time as we settled into a seven and a half flight, an hour-or-so quicker than the outbound one. 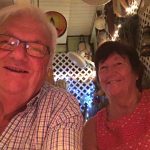 Enjoying our time at the restaurant