We have to be out of the hotel by 1100hrs so a lesiurely “get-up”, showers and complete packing.  We had to judge what 50lbs would be, this being the limit of weight to check bags into Amtrak.

Our final account was under the door for express checkou, but, they had charged us for Internet use, only $37 but it is a principal so after leaving tha room I diverted to the check 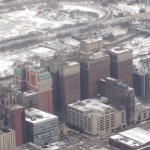 Hilton Towers, the back of our hotel from the top of Willis Tower

out, had a quite word then we were credited; they do like to try!

Jumped into a waiting taxi and arrived at Union Station about 10 minutes later. We knew where to go and joined the queue to check in 4 cases. First on the scales refused, 54 lbs, no if’s or but’s, they would not accept it and told us the re distribute everything.  We did this several times until we eventually got our 2 largest cases into the acceptable weight bands, 51.4 and 50.1 lbs. the two smaller ones were bulging and straining and 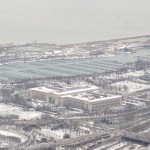 A view of The empty marina from the of Willis Tower

the Zips, but well under the weights.  Oh yes, I also had to take the lap top out, no electronics so our carry on is now 3 heavy bags, still we achieved our goal and it was still only 12.30. Next we went to the Metropolitan lounge and checked these heavy carry ons into left luggage then went out to town.

The weather today is much better, cold yes, but no snow, minimal wind and overnight the authorities have done a great job clearing the streets and pavements so it was a much 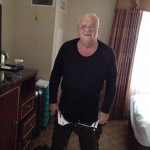 Trying to get trousers over my thermals!!!

better experience.  Still we have our thermals and winter coats, gloves and scarves so we’re fine, unfortunately no winter boots so had to get on with cold feet!!!   We decideed to go to the Willis tower and if it was open today we would go up.  It was, so we paid our $20 each and along with many others went into their theatre to find more out about the construction and why the name change.  We hen got into the express lift up to the 103rd floor, it took no time at all.

A few facts about this building for any statistical readers out there.   The tower was originally designed and built for “Sears” a very large retailer in the USA who had their administration spread all over the city.   One head office seemed the answer so building started in 1970 and was officially opened in September 1973. It was 1,450 ft high but if you add the communications ariels on top it comes to 1,729. When built it was the highest in the world though that didn’t last long!!!

As an added attraction at the top, they have created several glass cubes that jut out about 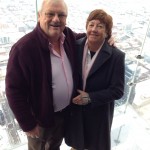 1 meter from the building which means you are standing over a clear drop to the street below, frightening.   Far better than the tilting floor in the Hancock building. 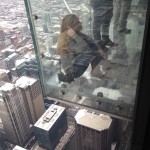 A view of the glass cube from the inside

The change of name came in the 90’s when Willis an Insurance Broker based in London leased it which included the name change.  This lease expires in 2023, I wonder what it will be called then!!

Next we decided to walk to Macys the famous department 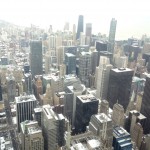 A view from the pot on Willis Tower

store here in Chicago and after wandered around went to the Wallnut room.  This is a restauarant with a separate bar.  The was a long queue for the restaurant but not for the bar (I didn’t think so anyway) so 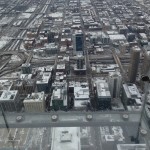 A view from the top of Willis Tower

walked straight in and sat at a table. The menu was the same so enjoyed their speciality, “Chicken Pot Pie” and a super bottle of their house white wine without queueing.  We followed this with a small cheeseboard washed down with a couple of glasses of their house red, we tried to 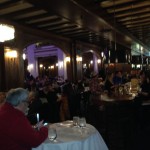 get Port but they didn’t have any!!! Our train didn’t leave ’till 2130hrs so this was our meal for the day. 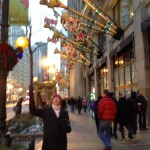 After a 2 hour lunch we left and walked back to Union Station, which took about 30 minutes, though we stopped to buy a bottle of wine for the train: we need something to help make us sleep!  We Arrived back in the Metropolotian lounge, had coffees and teas and waited for the call.

Though we had cold and snow yesterday it certainly didn’t dampen our enjoyment of being here, just meant we had to wear thermals! Roll,on New York. 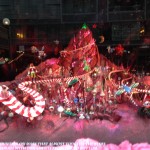 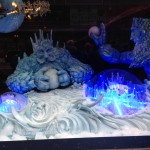 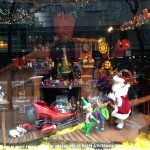