I was awake quite early, so I got up and made the tea, and enjoyed drinking it in bed. We both got up, and moved the boat 100yards to take on water, whilst we were having breakfast. A lady had beaten us too it, but not for long, so we filled up, before we started the epic trip of the Lapworth flight of locks (22) We are now on the Stratford on Avon Canal, which have the single locks, which means an easier ride.

We turned into the canal, and met up with Sharon and Richard again, thy were preparing to go the opposite way to us, so we faced the first locks, and we were very quickly on our way. We had a new system, I opened the locks, Geoff drove in, we both closed the gates, and opened the sluices, I walked onto the next lock whilst Geoff finished the lock he was in, it certainly speeded up the journey. When we came to lock 17 we met a guy who had blocked the exit under a bridge, on a bend, very difficult, we were coming out of 16, but had nowhere to go, the waterways guys were behind this guy, who had two boats to do, glad we 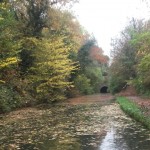 were not following him. The men from the waterways helped us get through, and they then waited for this guy to clear a couple of locks.

It took us three hours to do all the locks, which wasn’t bad, glad we are not on the Grand Union. Richard told us to go this way, and we are so pleased we took his advise, it is very pretty, with the Autumn colours.

We stopped at a pub which specialised in cider and local beers. The pub was a bit grotty, but the food was very good, I had fish pie and Geoff had faggots, very good.

We moved on to find a mooring for the night, opposite some nice houses, no pub tonight.