We left Kidlington behind, and meandered slowly through little villages, stopping for fuel, topping up the water, and all the normal activities we have to do, then headed towards Banbury, we made one more stop in the middle of nowhere, which was really peaceful.
Arriving at Banbury around midday, we found the same mooring as two years ago, we sorted ourselves out, and headed into town, first the washing to drop off, then pick up a few bits in Morrisons. After lunch we returned to collect the washing, after Geoff deciding to buy a tool box with some more tools, then he spotted a shopping trolley, oh no, 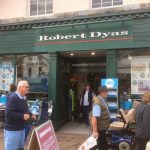 Geoff with his trolley!

really! Anyway he bought it, and we returned back home, only to 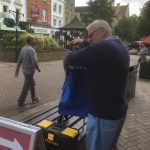 Not going to forget it this time!

realise that he left the tool box behind! Plonker! Having phoned Robert Dyas twice, they finally located where he left it, so we agreed to collect it in the morning.
Up bright and early as Geoff has to go back to collect his tool box, how embarrassing, just shows we are getting older and more forgetful.
Today Karon and Andy came over, so lovely to see them again, it’s been too long, we had a couple of drinks on board then walked into 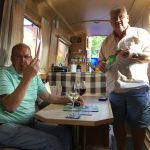 Town, we were going to a Thai restaurant but ended up going to the pub and the boys demolishing several pints of real ale. We had a lovely 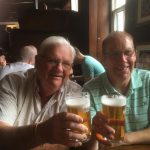 Andy and Geoff enjoying their pint

lunch followed by a few more beers, before going back to boat for coffees donuts, and a lardy cake we bought this morning from the market stall, they were delicious! We walked back to the station to say goodbye, don’t leave it so long next time. A great day was had by 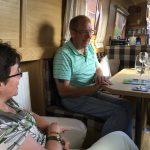 Sunday morning we walked to launderette again, then onto Morrison’s where we stocked up again, making use of the trolley, I guess it has it uses. Later geoff walked back to laundry whilst I had a thorough clean of the boat, and cooked a roast dinner.

Monday we decided to buy some carpet tiles, so we moved the boat up to an industrial estate, where we purchased our tiles, and Geoff then spent the next two days fitting them, we want to protect the oak floor, so when we come to sell again, it looks pristine still!