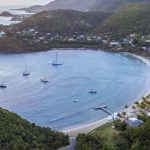 deliberation chose the beach in Carlisle Bay, and at the same time she expressed a wish to have lunch in the Carlisle beach resort.  So after breakfast we set out.

Why such a specific request from Jane to visit the Carlisle beach resort one might ask, well, 14-years ago around the same time of year we sailed into, and dropped the anchor in this bay.  Then, like today the weather, though nice and warm was inclement, with overcast skies and rain showers.   Earlier in the week we had contacted the resort as our 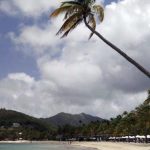 Best bay on the Island

first intention was to go there on Jane’s birthday but after studying the menu, it wasn’t appealing to her as her memories were of an excellent “Chinese”, but time changes things.

Arriving at the beach via a cheeky little dirt track we left the car and walked towards the resort and parked ourselves on one of their beach chairs.   As expected, it wasn’t 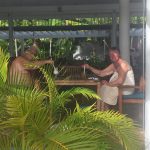 Sheltering from the rain

long before a member of staff arrived with a security guard in tow to chase us off, or get us to buy a day pass for $300 US, explaining this was an all inclusive deal.  After a little more chatting it also transpired we could go into the “outside” part of the resort, use their beach tables and chairs as long as we had a drink, that’ll do we thought and moved into their area.  After further conversation it turned out  we could actually use the verandah restaurant overlooking the beach, so 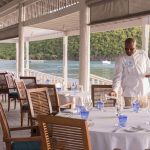 asked to see the menu.   The lady we had met on the beach with the security guard was still the same lady we were getting the updated information from as we went along, in fact we were having a laugh with both “Jaris” her name, and the guard, who called himself an “Jamtiguan”; born in 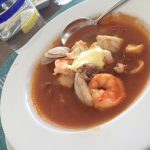 Jamaica, lives in Antigua.  The menu duly arrived and was a far cry from the menu the resort emailed me, it was far more interesting!

After a few Rum Punches and Pina Coladas we finally decided what we were going to eat so ordered and strolled into the restaurant.   As I’ve said many times, “slowly slowly catchy monkey” 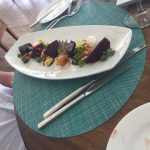 and the advice we were given from Jaris was, don’t pay the $300 up-front, keep the tab going and decide at the end whether to pay the bill or the day pass; lovely girl!!!

A thoroughly enjoyable lunch was had by the three of us helped with copious amounts of wine.   After dinner we sauntered back to our outside table before 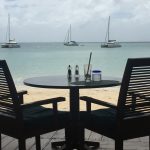 venturing into the sea.   The one good thing about about this beach is there is no shelf as you walk in.  Most beaches have a shelf about a couple of meters or so into the sea, presumably made by the fact there is minimal tide here.   Watching Jane get out of the sea has become a spectacle, entertaining to say the least thanks to these ridges but not today, Carlisle beach has spared her that embarrassment!!!!! 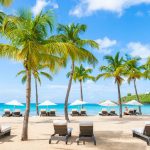 rushing out of the sea to put all our clothes etc., under cover, Jaris was seen doing the honours, so we stayed where we were.

After a fabulous day, reminiscing and enjoying the ambience we arrived back at the ranch, I have to say we’ll go back before we leave.

Saturday we had arranged to meet Geoff 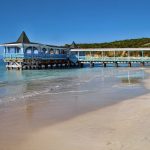 and Rowena for lunch at C & C wine bar and restaurant so we only had a short morning but we had to go for our daily swim.  As it was early and as there were no cruise ships, we went to “Dickinson Bay” where Sandals is situated.  This nice beach has an approach problem, it is down a short hill on an unmade road normally full of taxis, but not today, we managed to park on the edge of the beach.   A swim, followed by a walk along the beach goorking into Sandals before heading back to change. 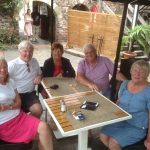 waiting for us; no chance, it was a repeat of the Wednesday night, as they scurried around fitting two tables together to make room for us.   Twice we’ve booked a table, twice we’ve been let down, but never mind; its Antigua!!!!

The 5-of us had a great time enjoying the excellent food, one of our favourites for starters,  are their coconut shrimps, 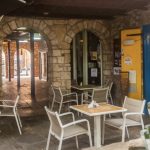 delicious and all washed down with some superb South African smoked Chardonnay, accompanied by stimulating conversation with a lot of rugby banter between a Saints and a Chiefs supporter.  This rather extended lunchtime was in danger of 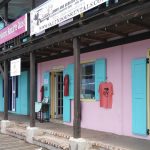 heading into evening when Jane and I started on the Brandies and at this point Geoff and Rowena escaped; they did have to drive to Falmouth Harbour, the opposite end of Antigua and it is an unholy experience driving after dark, so quite understood.

We awoke to Jane’s last full day with dark grey skies and heavy showers, and apart from a quick trip to the local supermarket, did little 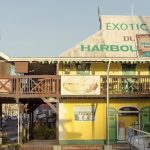 in the morning.  We were booked to return to Shirley Heights but upon advice from Mr Paul, the owners father, cancelled our taxi and decided to have a nice meal somewhere new; joke!!  Being Sunday most places we fancied, were closed in the evening, what a bummer.  Anyway after a 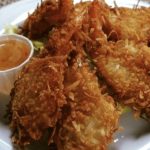 lot of internet browsing we came across the only place open, C & C wine bar; oh well we know we get good food there but won’t book, it seems to make little difference!

C & C seems to be our local now as we head down to Redcliffe Quay which overlooks the harbour of St. John’s.  This historic area is one of the oldest parts of the town, dating back as far as the 17th and 18th centuries.  In those days it was a busy waterfront docking area, widely regarded as the business and trading centre of the 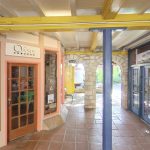 Caribbean.  It was the main trading place for Slaves, Rum, Sugar and Coffee between Antigua, Europe and Africa.  Today though it is where one can wander about down the narrow alleyways, browsing a few shops, and “down” a few Rum Punches, or in our case drink superb South African wines.

Arriving and parking with ease outside the Redcliffe Quay area made us wonder, why so quiet?   We soon found out as our wine bar was shut, locked and bolted and all evidence of tables and chairs removed, but their web site said they were open on Sundays ‘till 2000hrs, ugh!!!!    I’ll have to write to Claudine, the owner, and get their web site updated.

Oh dear, what now as we wandered around aimlessly exploring the

possibilities.  There was nothing open in St Johns, we’ll nothing Jane fancied that is, only local food; we were game but it was “Madam’s” last night.   There was no alternative left, Jolly Harbour was where we had to go, and that meant I would be driving after dark, oh well at least I knew what to expect!!!!

On arrival, we were too early and nothing 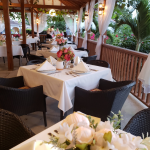 Lovely setting for a meal

was open yet so sat overlooking the marina whiling away the time ‘till the “Greek” restaurant opened, yes tonight

we went Greek, and very nice it was.  The unusual starters were full of flavour and we all enjoyed the mains.  They had a superb 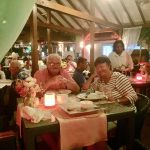 Laughing at Jane having her fag!

wine list but there were no “bottom end” wines so we limited ourselves to one bottle, a bit of a struggle but we managed it!!!

The drive back was as predicted, “hell” but we survived and once back home cracked open the brandy to calm our shattered 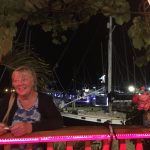 I have a similar photo 10 years ago

We had terrible rain during the night and it wasn’t much better when we awoke. Also Jane leaves on tonight’s flight, it’s been a good 11-days and we’ll miss her. She’s such a good sport and we won’t have anybody to moan at, not to mention the stick we give her about her smoking; “Jane give it up”, if nothing else your pockets will bulge more!!!

By mid morning the sun came out, the temperature rose and we were 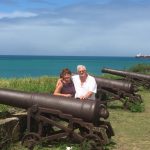 much happier, so after coffee, with a brandy of course, we headed down to the Fort James Beach, via the ruins of the old Fort.  This beach is one of the longest on the island and as far as Jane was concerned, very good as there isn’t any tidal ridge with which the fall down on or up whilst leaving the sea!!!!

After the most expensive Rum Punches we’ve had on any beach, and they certainly weren’t the best we’ve enjoyed, we returned home.  Whilst Jane was sorting and packing I was on cooking duty and on today’s menu was “Corn-beef Hash” but with “parameter” potatoes garnished with a fried egg; it must have been ok as we ate it all up.  Whilst I was slaving over the cooker, Christine was standing at the ironing board directly under the air-con 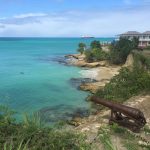 Time for the-off, car loaded and we headed to the airport, in the dark, to say goodbye to Jane, and apart from a minor hiccup checking in,

she’s on her way; Bon voyage Jane, see you in Spain later in the year.