On the evening of Thursday 11th April I arrived at the Holiday Inn Express in Gloucester ready for an early start on the Friday, being part of the support team for Jane competing at the Dressage National Championships at Hartpury College,  just outside Gloucester.  Jane had qualified for these Nationals during the year and I was very fortunate they fell between our wedding and our Honeymoon, so that I could lend my support as well, what luck!!!  I was also to be her video cameraman, oh such responsibilities as she needs these videos to look back to see her mistakes etc.

Driving to Gloucester was done with hail stones at times the size of golf balls, torrential rain with the odd glimpses of sun poking through as a tease; what would the weather be like on Friday bearing in mind her tests were outside!!

Arriving at the college in good time for her warm up, only to be sent into a totally separate car park well away from the horse boxes etc., meaning a 10 minute walk down hill (oh, I have to go back up later!!!!!) to get to the arenas, so by the time I was kitted up for all kinds of weather, my good intention of arriving in good time before her warm up went by the way,  she was now well into it; at least she saw me so was relieved as I was there with Camera!!!

0927hrs was her time, so I positioned myself in a suitable place outside the arena and was ready as she approached the perimeter waiting area before her start, the bell went, Jane was officially introduced over the P A system giving a little history about Jane and Herbie as she entered the arena.   About two and a half minutes later she was finished, so we had to wait for her score and when it came it was very good, so we then had to wait ‘till the last competitor had completed to see where she came. 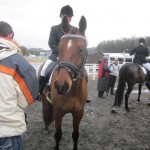 Herbie expecting his Polos for being a good boy

polo mints, apparently he only gets them when he behaves, is that training or bribery, still if it works, good.

This competition has been going throughout the year, all over the UK with the best 60 riders qualifying for these finals.  The 60 then compete with the best 30 competing again in a “final final” later in the day, so Jane’s first task was to get into this 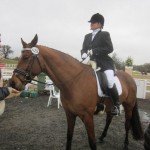 last 30.  As Herbie, [his competition name is “Urban Knight”], is only a 5 year old, he is still a very young horse and therefore still learning his “trade” so, Jane getting him to the finals was an achievement in itself but having got there, you can imagine their next ambition was to make the last 30. 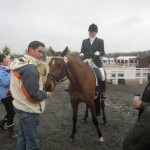 Waiting for all 60 to go through was quite nail biting because she was again one of the early competitors to go and very gradually she dropped down the score sheet, “but” she didn’t go down too far and qualified to go through to the last 30; better still she did it by being in the top 10.  You can imagine the joy around the support team, not to mention Jane!

During the interval we all watched the play back of the video and Jane was quite impressed, mainly about Herbie who behaved impeccably, he has a history at some venues of playing up but not to day, he must have known the importance of everything.

1438hrs was her next time, also amongst the early riders.  Again I was on duty with camera to the “ready” when her turn came, once again Herbie behaved impeccably and Jane completed without a hitch so all we could do was wait, and wait, and wait until 1630hrs when all the competitor’s scores would be posted.

I stood by the score board not moving, just waiting as the lady kept arriving and posting scores as they happened.  Jane’s score went up, wow, 2nd at this point but still about 25 to go.

18 competitors scores were up and ouch, Jane dropped to 3rd, oh dear 12 to go, nail biting was happening throughout the support team; no one else stayed with me at the score board as the last scores went up.  In amongst these 12 was a competing friend of Jane’s  who had competed against her on many occasions and always won; unfortunately she still had to go, so we were a little despondent but hoped Jane would get into the top 5 at least.

The lady came with the score for Jane’s friend and wow, her marks were lower than Jane’s, that was another great achievement and a first for her, so third place was still held.  You can imagine we had run out of finger nails by this time and were well into our fingers.

Down to the last 2 and still 3rd but then no more scores, we were kept in suspenders!!! until suddenly the public address system burst into life and confirmed Jane Littlejohn was third overall, fantastic, well done, what an achievement with such a young horse. 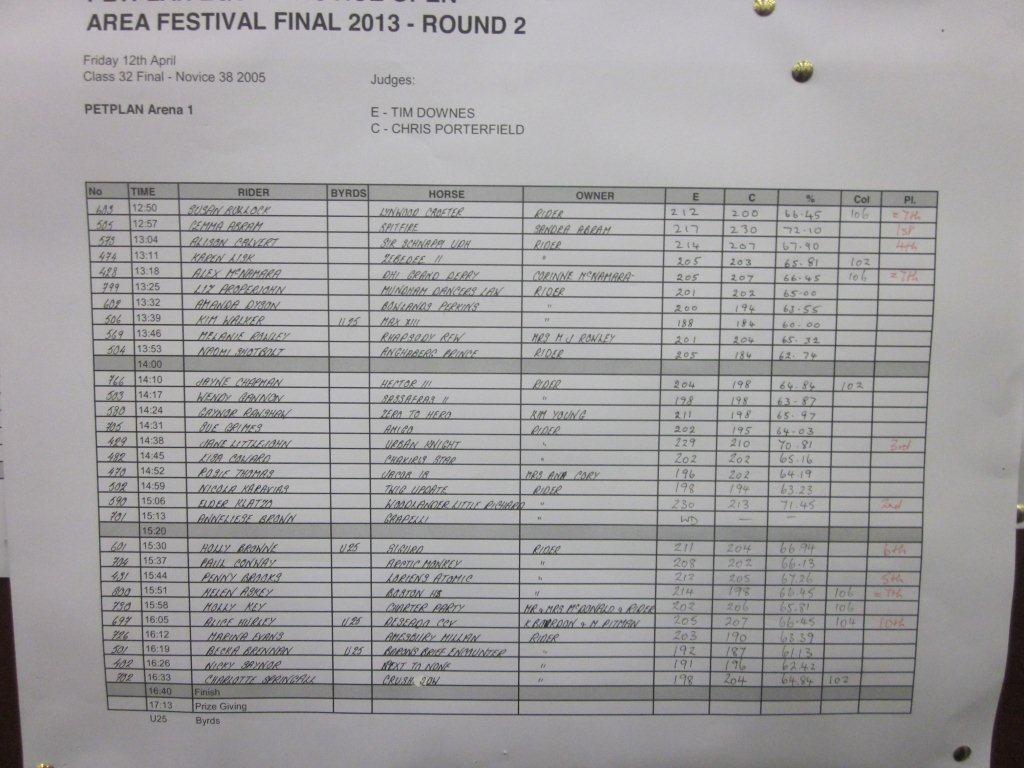 The Final Final score sheet for all competitors

So back to the Video as naturally we had to record the presentation.  The first three went into the inside arena and were presented with their rosettes and prize money!!! This was followed by un-tacking, giving herbie a well deserved supper, a quick change for Jane and then then off to Julie Hugo’s horse box for a well deserved glass off bubbly.  Julie is the Lady that trains Jane and Herbie, without her none of this would have been possible. 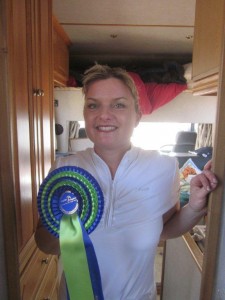 A Winner in our eyes

I arrived at the college at 0845 in the morning and drove out of the car park at 1830hrs,  a total of nine and three quarter hours, all for about 5 minutes of competing, is that good or what but it was all worth it, but more importantly, the weather generally behaved itself, another first I believe too!!!!!!