Sunday and again an early start heading back to Magic Kingdom.   It is so big and there were so many people the other day that we only 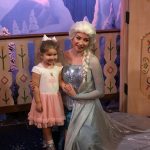 Mia with the princess

covered about 20% of the park so today we gave it our best shot.

Even though we were ahead of the game, the build up of crowds going through security bag search was daunting, at least with pre-paid tickets, we don’t have too 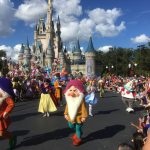 Another parade, they were brilliant

long to queue at the actual  entrance gates.

Today we attacked several rides, mainly  Jane type rides though I did accompany her on a number whilst Nanny Christine took charge of Mia.   Again we were tripping over people, being Sunday the park 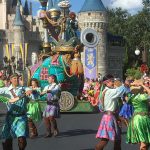 was again very busy and though it is still early November, Veterans Day (last week) seems to kick start the Christmas holiday period.  Xmas carols all the time, Christmas themes everywhere and “Santa’s” in their grottos.   We regret 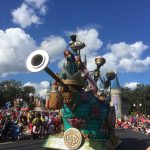 coming in November, speaking to locals, February is probably the quietest and therefore the best time. 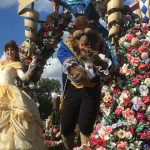 Beauty and the beast

second hire car: next week we have different itineraries.

Dave’s flight arrived a little early than scheduled and he had the good fortune to hit Border Control at a quiet time so didn’t have the long wait we did, the result of that was he was waiting for us, oops!!!!!  Whilst Dave and Jane got away very quickly, I had 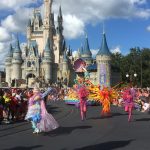 to queue for ages at the Alamo desk to collect the car.

Monday and away at 0700hrs as we headed to Tampa to visit Bush gardens.  Though just over an hour away we didn’t want to get stuck in commuter traffic and arrive late so, “up-and-at-em” and breakfast near the park entrance.  Jane and Dave had memories of a bumper buffet breakfast, all you can eat at a chain called Denys, so this was our mission. 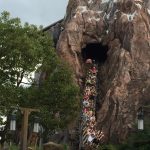 opposite carriageway, so a quick “U” turn and we were in, only to find they didn’t do a breakfast buffet.  The Disappointment on their faces was clear to see but never the less we did enjoy a very good breakfast, plus 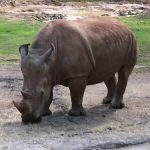 numerous pancakes; no wonder everybody puts on weight!!!!!

Being early at Busch Gardens meant we could get onto several 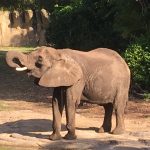 rides before queues built up; we started with a cable car ride across the “African Plains”, looking down on the “reserve” then onto a Log Flume.  Now we split, Dave and Jane went off to do their Kamikaze rides whilst the 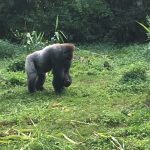 three of us did the more sedentary rides.  Our paths crossed periodically but one of the most enjoyable attractions was the train journey that weaved its way through and around the game reserve where we saw elephants, black and white rhinoceros, hippopotamus, lions, giraffes and many many more.   This has now 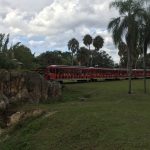 encouraged us to bring forward our planned trip to South Africa to enjoy the “real” safari park; Harry is now on the case!!!!!  Another highlight was the ice show with a Christmas theme.  I have to say all the shows, though they may only be for around 30- minutes long, are full scale productions, and this ice show was no exception.

After a long and exhausting day in Busch Garden we left but being rather late for Mia stopped at the same Deny restaurant we had visited in the morning and have to say, again, we were really impressed; nice food and at reasonable prices.

Tuesday we went our different ways, Jane and Dave went to Universal’s “Islands of Adventure” park, on their own to get a full days 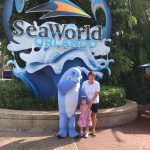 fix of “kamikaze rides”.  We on the other hand took Mia to “SeaWorld”, far more appropriate for young and old alike!!!!!

We had a slight problem before hitting the road, we couldn’t start the hire car.  We have a brand new Hybrid Ford that had a mind of its own, we tried everything to 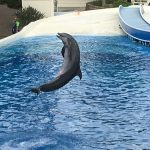 start it and by this time it had run down the drive into the road and we were stuck.  I thought I had done everything I was told when collecting it. Foot on brake then push start button, gear selector in neutral, hand brake on, 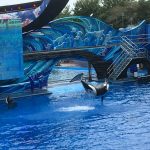 doors shut doors open! Nothing so resorted to ringing the breakdown service.  All I wanted was to know what I was doing wrong, or not doing but no, first I had to answer all sorts of questions.  Eventually I was told, foot on the brake and press the start button simultaneously, 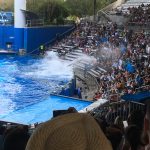 hey presto it started.  What a fool I felt still we were now on our way.

We arrived later than planned but hey, we were here now and  thoroughly enjoyed the 3 shows we watched, firstly the dolphins and their keepers entertained us 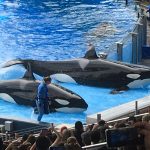 with flips and tricks and gentle water splashes over the two front rows. Next we visited the Shamu stadium where the Killer Wales perform.  These 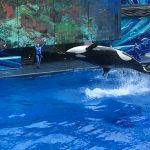 giants of the sea did some quite spectacular tricks though in this show the keepers don’t enter the water.  The highlight was when these giants of the deep splashed everybody in the first 15 rows, there was no escaping, these people were thoroughly drenched; all good fun. 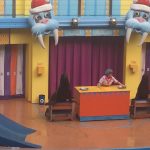 Lastly we visited the sea lions, here the theme was “finishing school” and collecting their diplomas, an odd subject but thoroughly entertaining.  They were so funny that all the children including Mia were rolling about in the aisles, well they would have but health and safety here 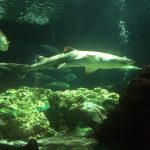 means they had to stay in their seats!  Our day was completed by walking around the park looking at all the various fish ponds, including sharks, sting rays and various species of seals.  There are of course roller coasters, all of which looked 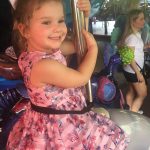 We finally arrived back at the house, and 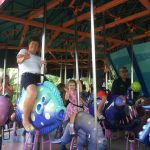 after a light supper went into the pool and had a great time with Mia; needless to say it was very enjoyable.  Long after her normal bed time we eventually put her down one very happy little girl and she was asleep in moments.  Mum and Dad returned later in the evening loaded with shopping, they had taken advantage of the “Black Friday” bargains. 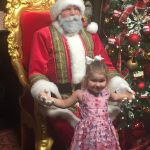 We even found Father Xmas