We left after breakfast, had an easy trip to the Mont Blanc tunnel,( which is about 11km long), paid our 52 Euros one way, then had an easy run through, we were told that there 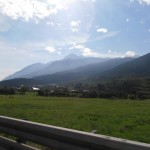 was a three hour wait yesterday, but no problems today, we arrived the other end, to have to go into at least five other tunnels, think the Italians like doing tunnels! They were all fairly long, which meant we avoided the mountains, which was good, our engine is underpowered, so most of the time, we would have been in 2nd gear, so it was a pleasurable 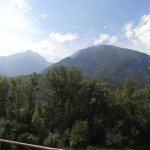 drive, the tolls were expensive, but I am more relaxed this way.

We have no knowledge of the Italian Aries, so we chose one, which is on route, if we have problems we would keep going, well with tom tom having all the information we had, we found the site very easily, and we are on a river bank with a weir. Incredibly noisy with all the water running, they also have a slalom course for the canoe’s to try to navigate. 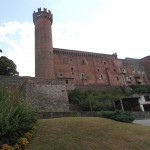 The old town itself has a medieval castle and a 11th century cathedral, which we walked up to, it was at the very top of a hill (which pleased Geoff) the streets were all cobbled, and very narrow, with lots of houses, with room for one car only. Most of the town was banned from vehicles, which was nice.

We stopped and had a cup of tea, in one of the many squares, and later found a lovely ice-cream parlour, so we had to indulge! 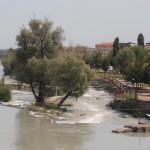 Spot Rosie in the distance

Walked back along the banks of the river, another lovely town. 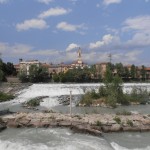 View from our campsite

This entry was posted in France, Italy. Bookmark the permalink.