We woke to a very miserable day, wet grey and dull, thought for one moment we were in the Uk.
We had some breakfast, and checked at reservations to see if the ferry was running, which it is, also the weather is slowly improving, so we decided to go. 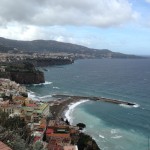 A view from the Coastal Road.

We travelled to Sorrento, such a lovely place, and parked the car by the ferry €20 for the day, not bad, had a one hour wait for next ferry, so went for a coffee. The seas looked more settled today, but once we were onboard, we realised it was not true! It was a very rough ride, nearly lost my stomach a couple of times, one of the crew, was delivering plastic bags, and many of them were filled, fortunately I managed to avoid all that. Even Geoff admitted it was rough! 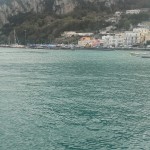 We wondered down the pontoon, the port

was very pretty, but when we got to the end, we wondered what else there was around, we popped into the “tourist office” and then had another coffee €9 plus another €9 for two jam tarts, obviously this Island is expensive! 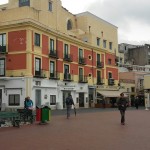 Having asked the man in the shop where to go, we caught the local bus, this was like a roll a coaster, the roads are very narrow, and cars coming the other way, only just managed to pass.

We reached the Capital, called Capri, and walked around, the views are truly amazing, 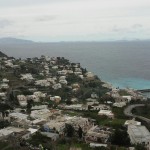 Overlooking bay from the top

and the little narrow streets meandered all around, 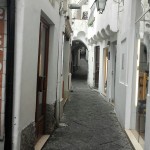 Side streets in Capri

I loved walking around and looking in all the shops, although lots were closed because it is out of season, the place had a buzz to it, and we could imagine what it would be like when busy. Personally I think it was a better time to come. We finally ended back in the square and stopped for a couple of glasses of vino, €10 euros a glass, Geoff nearly fell of his chair when he got the €40 bill, but the wine was

lovely and they gave us bits with it!
When we were wondering around the narrow streets we wondered how deliveries were made, and dustbins emptied, we then saw a delivery man. 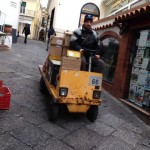 A delivery truck to cope with the narrow streets

Back on the bus, down the hill again, and then five minutes before the boat leaves, so Geoff went ahead, to make sure we made it. The trip was far better on the way back, the sea had calmed a lot during the day, thank goodness, so we enjoyed the journey, and for the first time Versuvias was clear 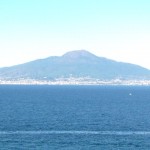 We were going to get a meal where we had had coffee in the morning, as we liked the menu, but when we got there everything was shut, so we headed into Sorrento, parked the car, and found another restaurant, and enjoyed the pasta.

Heading back to the hotel for a quiet night, and pack our bags ready for the off tomorrow.