Today we are visiting Ile Royale or known as Devils Island to us. We were advised last evening we would arrive at 0700hrs but would be leaving at 1100hrs. At around 0350hrs, that time of the night when nocturnal activities take place and our paths crossed, Christine came out with, “Its gone 6 o’clock, we may as well get up and catch the early tender” I naturally got back into bed and suggested she also went back to sleep!!! As things happened due to the strong northerly current our ship lost ground resulting in our arrival being late, arriving around 0900hrs. 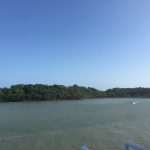 At anchor with tender going to island

Our tea boy performed admirably again this morning, well done to him. We enjoyed our breakfast watching the Islands from the terrace buffet on the outside deck whilst the ship dropped anchor and discharged the tenders, preparing for the transfer. There is only one small jetty here so we were a 5-minute boat ride away.

Our plan was to wait until the first rush of people had gone, this saved us having to wait in the lounge and get tender tickets etc. Our cunning plan worked; once we had completed breakfast, sorted ourselves out, we walked down to the tender embarkation platform and straight onto a tender and away within a couple of minutes; so far so good but now 3 large Catamarans had arrived from the mainland and they presumably got priority to land their passengers which seemed to take for ages.  Our 5-minute tender ride eventually took around 25 minutes; still it was quite fun bouncing around in the swell!!! 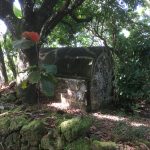 Solidarity confinement, dark away from everywhere

Now for a brief history. The first reference of these islands was recorded in 1552 and in 1595 Sir Walter Raleigh was in these waters; in fact he sailed up the

So tiny, no wonder they went mad!

Orenoque River. In 1604 a French explorer arrives and the entire region between the Amazon and the Orenoque River becomes French Territory.   Around 1763/64 a failed expedition took refuge here and that’s when the islands became known as the Iles du Salut, or Salvation Islands. From 1795 – 1798 during the French revolution, 331 political opponents and Priests who refused to take the Oath of Obedience to the constitution were shipped to this region; obviously not 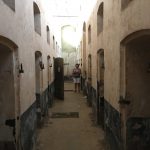 everybody was guillotined at that time!!!     In 1852 the first shipload of Prisoners left France to begin their sentences in Ile Royale, later to be known as Devil’s Island. At that time the French Government, led by Napoleon 3rd, had the idea of getting rid of Prison buildings and their inmates, and in 1854 the law on transportation was passed. Jails were emptied and all prisoners were sent to French Guiana to a prison Complex in the North West of the country where they were subjected to hard labour 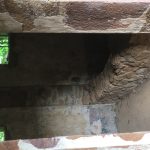 Remains of the prisons

however, those most dangerous, or troublesome in the hard labour camp, ended up on the Ile Royale, later known as devil’s island.   The conditions here were dreadful, many went off their rockers; not surprising as the worst offenders were thrown into a cell about 7ft by 4ft with no roof for up to 5 years!!!! The better-behaved poisoners had a certain amount of freedom as the island was impossible to escape from, however: Apparently one man did escape by tying loads of coconuts together and floating away, but where did he float to I have to ask!!!

This penal system went on until it was disbanded in 1938. The strap line for this place must be “Purgatory in Paradise” 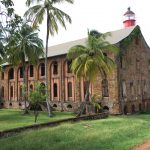 One of the restored buildings

To add injury to insult, all prisoners released after completing their sentences had to stay in French Guiana for a time equal to the length of their forced labour sentence, but if your sentence was more than 8 years, after release you had to stay in Guiana for the rest of your life, harsh or what? 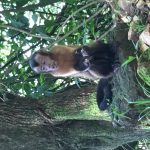 My favourite bit, the monkeys, they were fun to watch

Today this is a very nice island to walk around, tropical vegetation, palm trees with coconuts, the remains of the prison 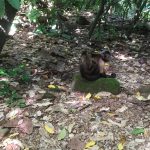 Spot the tiny baby on her back, so cute

cells and other derelict buildings, a Hotel, but the exciting part 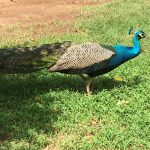 was seeing the monkeys that live on the Island. There are two species, The Spider Monkey and the Capuchin Monkey, not too sure which we actually saw!!! There were also Peacocks and Agoetis, large funny looking rats without tails. 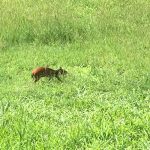 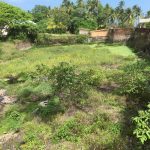 Water used to be kept here and pumped out!

We thoroughly enjoyed our morning and we were back on board at noon, ½ an hour before the last tender left the Island. 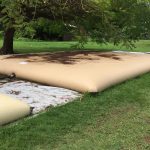 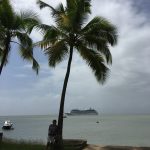 Beautiful idyllic Island shame it has a terrible history

couldn’t wait to get back to our cabin, take off our clothes, as they were soaking in sweat, and have a cool shower before going to lunch.

This afternoon we had the first of six lectures about the Amazon, very interesting but our lecturer has a boring voice and many people dropped off.

Yesterday I was seduced by a rather nice lightweight Blazer in the ships boutique, so bought it; ouch! Unfortunately, to get the right size and a decent fit, the sleeves were too long but never mind the shop staff tell me, we have a tailor on board who will sort that out for you. Late this afternoon we had a call from the tailor, he came over, measured the jacket sleeves and said it would be ready in the morning. I had no opportunity to change my mind!!!!!

We dined in the Buffet again tonight as we both fancied a Lobster followed by a steak; decadent or what!!!!! As we were finished rather too early for “Showtime” we went into the card room and played a few hands of crib.

An old crooner from the UK, Jamie Michael Stewart, entertained us tonight. His main claim to fame was that he was in an American program called “Love Boat”, never saw it my self but apparently it was popular and ran for several years. He sang many different songs from famous Artists such as Frank Sinatra and Barry Manilow to name but two; he was the total professional and had the audience eating out of his hand but he was very good. He has two more shows before we leave the ship.

Another sea-day tomorrow but more importantly we enter the Amazon and cross the Equator when we will be visited by King Neptune and all those who haven’t crossed the Equator by sea will have the initiation!!!!

This entry was posted in Devils island French Guiana. Bookmark the permalink.