Today was to be a day of action at the Iguazu Falls and it was. 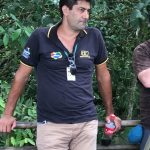 Leonardo collected us at 0900hrs and we were off.  Firstly a 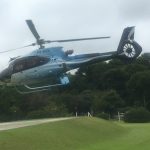 Posh helicopter, it was very good.

helicopter flight over the Fall’s; it was Christine’s first flight in one so a little apprehensive me thinks!! Wow, what a sight 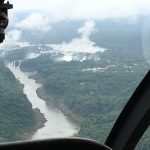 View from the helicopter

unravelled before our very eyes.  Yesterday we were bowled over at the sights as we walked along 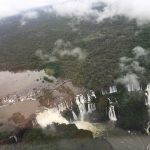 Different angle of the falls

the path, but today, to be able to fully appreciate the enormous area these Falls cover was just something else: they are enormous. Fortunately, though 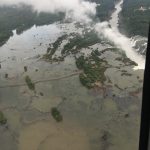 Some loud, didn’t ruin our views

there was some cloud cover, it was clear over the Fall’s so we had a good look with plenty of ‘photo time above them.   Though we 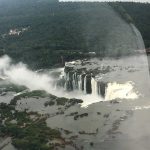 were only in the air for 10 minutes and it went quickly, we got off the helicopter on a high.

Leonardo was waiting for us and we were off to our next stop, Argentina.  As I mentioned the Fall’s are in two countries: we 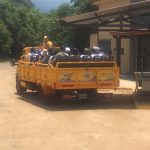 Safari truck, driving through the jungle, there was only five in our truck

did Brazil yesterday and now heading, passports in hand, to the border crossing.  There was a long queue to get through the border control but being an official tour guide, he has special dispensation; we by passed the queue and went straight to a border control booth where we got our passports stamped and we were on our way. Another good reason to have an official guide with us.

45 minutes after leaving the Helipad we pulled into the 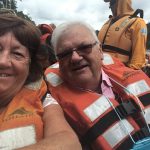 All kitted out, off we go

“Parque Nacional Iguazú” the Argentinian national park.  Our first adventure was going to be a “boat ride” experiencing the 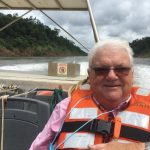 Everything is good, and we are still dry 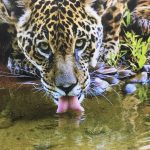 Caymans and untold species of 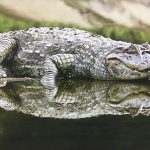 snakes, not all venomous but nobody in their right mind would want to take a closer look!!! 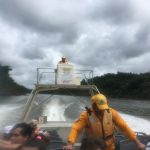 Heading for the Falls

to get onto a truck. This brightly painted yellow truck with rows of bench seats on the back drove us through even more dense jungle, and about 20 minutes later we got off and then had to walk down millions of steps to the waters edge to get into our rib. Going down is always easy, but I wasn’t looking forward the coming back up; still we’ll deal with that issue later. 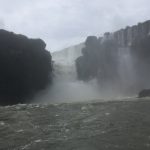 We had been warned when we first booked to expect to get wet so we left the hotel with our swimmers on, and a change of clothes in our bag for later. En-route we had stopped by a street 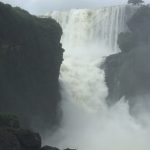 seller to buy two plastic pouches to keep our ‘phones dry in; they are transparent so we could still use the camera. The boating people supplied a waterproof container for those who had their bags with them. Because we had Leonardo, we left our bags with him; smart eh!!!

We donned our life jackets and settled into the rib; 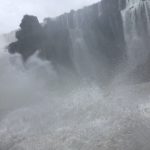 fortunately it wasn’t too full so we each had a seat on the side. We’re off, full power, the bows lifted and we were haring head for leather towards the bottom of these gigantic waterfalls; and when you are at the bottom, they are gigantic!!!!

We hovered around for everyone to take pictures and then we went into the waterfall base. When they said we would get wet 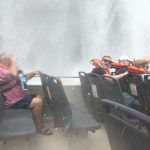 they weren’t kidding, we had what seemed several tons of water 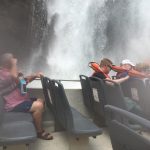 So funny, not sure how I kept taking pictures

dropped upon us from a great height. Whilst Christine was clicking away I was holding onto my glasses for dear life. Anyway the driver pulled away and immediately found another waterfall to drown us again and to make sure each side “enjoyed” the same went back the other way!!!! Wonderful experience we thought, glad we did it but then the driver suddenly changed direction and went back to the first 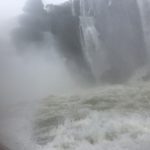 place he tried to drown us, again he only managed to soak us, and if we weren’t wet before, we were this time, right through to the core. 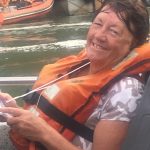 We did look around the other folk in the rib, mainly youngsters and it dawned on us that perhaps, we should act our age, then 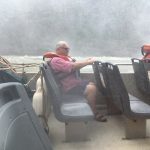 Geoff soaked, in fact we all were, good job it’s warm

immediately dismissed the stupid idea!! We really enjoyed this part of our action day and felt sorry for those who put it on the “too hard to do pile”

Those steps now came into play, and as the youngsters and 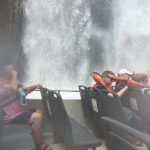 Geoff holding his glasses on ready for another soaking

Christine rushed up them, I took my time, though I noticed at the halfway point there was a Red Cross person, just in case!!! I arrived at the top albeit 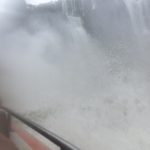 slower than the rest but they were still there waiting for the truck to take them away; the hare and the tortoise spring to mind.   By being at the back of the queue our truck was very empty so we had loads of room.

Leonardo was waiting for us but we did suggest we stopped for a bit, had a coffee and some Empanados before moving on.

We now had two options, the lower trail or the higher trail, both several Km’s, anyway he suggested the higher trail but only go so far and this is what we did.   We looked at the same falls as we did yesterday but from the opposite side, not too much difference, still a lot of water cascading down but well worth it.

Now was the time for the train ride. This train takes you 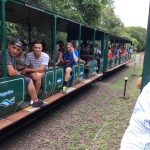 One of the other trains passing us

towards the devils throat, Argentinian side. At the end of the line Leonardo said it would take a further hour to walk to the Devils throat, this was our cue to stay on the train and go back, but better than that, this train carried on nearer the Park entrance. 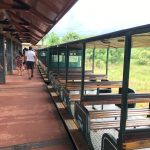 Back in the station, time to go home

The Brazil side is a natural park that cares for the environment and apart from the path to walk along to see the falls, that is basically it. The Argentinian side on the other hand is more of a classical theme park; yes they certainly care for the environment but they probably attract more visitors due to the other things going on.

When we got out of the complex, there was Leonardo waiting with the car at the entrance, what a good decision to have a private tour guide for the whole time we were here.

We arrived at the border crossing and again there was a long queue waiting to go through, but not for us, passports stamped again and on our way; no hold ups.

We arrived back at our hotel 7½ after we started, thoroughly knackered but really pumped up at our exciting action day.

Shower and a light dinner and no doubt we will sleep well tonight. Leonardo will collect us from the hotel tomorrow morning at 11.30 when we return over the border to catch a domestic flight to Buenos Aires.