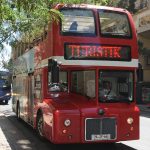 Back on our favourite tourist bus

day as we are going to stop at “San Cristóbel Hill” in the Santiago Metropolitan Park which we have been advised is both, “a must do”, and “will take some time”.

The bus arrived promptly at 0940 and we were on our way; the stop we needed was No 2, the 5th one we came to. The stop was actually called the “Hotel Sheraton and 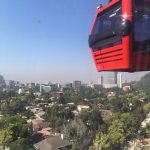 Teleférico” so we didn’t rush to get off as yesterday we saw the queues to get into the park and this certainly wasn’t the same place, but just in case, we asked the bus conductor who said, yes it was and we need to change to the other bus that was waiting for us in front. Good job we asked, anyway we were off in an instant and onto the other bus in a flash, which set off to the entrance where the gondolas leave, immediately after, phew!!!!!

The tickets we purchased were premium ones which included the 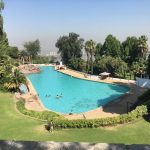 The swimming pool, ideal for a family day out

entrance, gondola, zoo and funicular fees, so we didn’t have to queue to pay, we were straight onto the first available gondola. The first part was up the smaller of the two hills, which were mainly parkland with neatly kept grass verges and manicured trees, nothing particularly spectacular, but 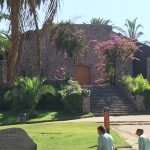 So peaceful, not many people around either

peaceful. We decided to get out at the first stop for a look around and this was a pleasant area with views over Santiago, a very large swimming pool shaped to blend in with the natural surroundings of the Mapulemu Botanic Garden that we were in, with its well maintained gardens.

This “Santiago cable car” was opened in 1980 though in 2012 it closed due to mechanical failures and was only re-opened in 2016, after a 9.5 million US Dollars was spent to 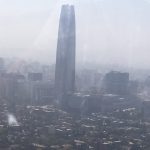 Look at the pollution!

bring it up to satisfactory condition. The trip takes about 20-minutes.

Off we went on the next stage of this gondola trip to the top, the second and highest of the 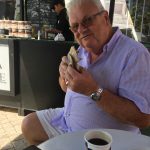 two mountains, 300-meters high, not quite Mount Everest but this time the terrain we travelled over was left more to nature. On arrival we spotted a coffee shop but more importantly a “Crêpe” place; 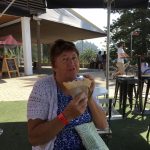 At least I did the healthy option banana! Scrummy

this was a must have of course!!! 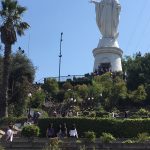 350 steps up and the same coming down, no wonder we are always tired

is a sanctuary dedicated to the Immaculate Conception, with a 22-meter statue of the Blessed Virgin Mary, an amphitheater and a chapel. This statue measures 14 meters tall, and the pedestal on which it rests is 8.3 meters high. It weighs over 36-tons and within the pedestal there is a small chapel in which Pope John Paul prayed on his visit to Santiago 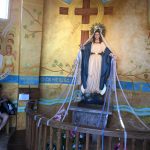 Inside the base, was a small chapel

in 1987.  I am sure this is quite something to behold in many peoples eyes but after being up to “Christ the Redeemer” in Rio, well something seemed to be missing.

The views of Santiago should have been very spectacular from up 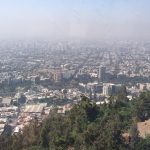 Views from the top

here but there was a cloud hanging over the city, we thought it was a heat haze at first, but on closer inspection realised it was pollution, like a haze of traffic and other fumes rising up from the streets; what a shame. 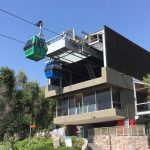 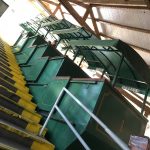 Looks very scary, and you have to stand

After wandering around for some considerable time we headed for the funicular; yes it is a one way system, up on the gondola and down on the funicular; still a change is as good as a rest. 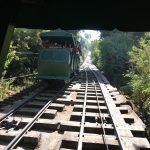 Crossing over with the one coming up

This funicular dates back to 1925 and one of the two carriages has a memorial plaque commemorating the Pope’s visit in 1987.   In 2012 this mode of transport was re-furbished as part of the 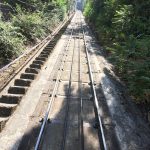 Chilean bicentenary.   On our decent we passed the stop for the Chilean National Zoo but not being too interested we carried on down.

Back on the bus for a well earned rest until we arrived at stop-6 the “Plaza de la Constitución”. This plaza was the hub of Chile’s Executive power and was originally constructed between 1784 and 1805. The “Palacio de la Moneda” the main building dominating this square was 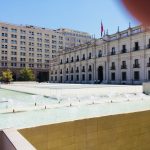 originally designed to be the Royal Mint but from 1846 it was used as the presidential Palace right up to 1958.   This square is surrounded with government buildings 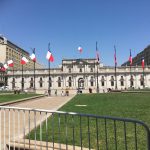 Back entrance of Palace

such as the Ministry of Finance, Ministry of foreign affairs, Ministry of Justice Central bank of Chile etc., but since 1987 Congress operates in the port city of Valparaiso, about 65 miles northwest of the capital.

Whilst wandering about, hunger pains came to the fore so we popped into the first place we could find and we enjoyed Chilean “Fish and Chips” and they were wonderful, far better fish than we had had in the specialty market yesterday, and as a bonus, about ¼ of the price.

Back onto the bus for the final leg back to our home stop, and then a stroll to our hotel for a chance to put our feet up. After a suitable time we emerged again for a drink at the bar which then led into a snack in the hotel restaurant. At last we managed to get away from our room in the early evening!!!