Up early this morning, just for a change, breakfast was at 6 am, we manage it quite easily now, as we are so tired at night, we are going to bed about 9 pm.

A quick breakfast, then in the dinghy for 6.45 am today we are going to Espanola Island, we motored through the night, and arrived here about 2 am this morning. 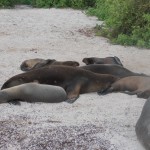 We are off to Punta Suarez, we were supposed to be having a dry landing today, but the sea-lions have taken over the landing, so instead we had to go to the beach.

On arrival we saw lots of sea-lions just resting in the sun, there were a variety of babies up to three years old, they do not worry about people, it is fantastic, and some even pose for you. 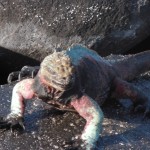 Mingled in the rocks were the marine iguanas, lava lizards and Sally light-foot crabs, everywhere you go, or walk there is something to look at.

We continued around the cliff tops, the views are amazing, we 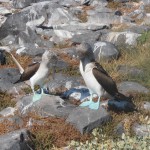 had to stop at one point as there was a pair of blue footed boobies (yes it is their name!) doing their courting ritual, they did not seem to worry about us, we slowly walked passed them, whilst they just carried on!  We saw mockingbirds, Darwin finches, and swallow tailed gulls.

Further around the coast we came to an impressive blow hole, 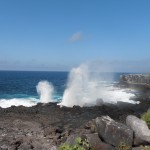 which squirted large amounts of water, as it did so you could see a rainbow, we stopped on the rocks and just watched it for a while.

We have been out for about three hours, but unlike the jungle it was fascinating, I just love it here,

The zodiac picked us up, and as soon as we were back on the boat, we set sail for Gardner Bay, just the jib and the staysail, everything we could wish for; trouble is Geoff will want a boat again!! 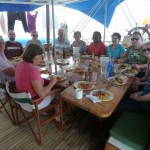 Lunch with the crowd

We had our lunch, which was squid, not as good as we get in our favourite restaurant in Pillar de Horadada, but it was tasty.  We had our normal laugh at lunchtime, everyone is great, six of us have birthdays within a few months of each other, and for a change I am not the oldest.

After lunch it was snorkel time, which I enjoyed, but did not see much, trouble is we have been spoilt in the Caribbean.

Back on board we motored a bit further, when it was back in the zodiacs again for a lovely 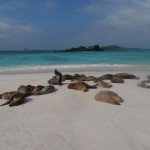 Beautiful sandy beach with a colony of noisy sea lions.

walk along the sandy beach, and go for a swim if we wanted, which Jane and I did, after we had watched all the sea-lions and an iguana playing in the water. The beach was beautiful here; it reminded me of Barbuda in the Caribbean.

It is all go here, but not tiring or stressful, it is very very enjoyable. We had a lovely dinner, and then after Larry produced a piece of paper and we each had to name what we had seen today, there were 25 living creatures/insects, and 2 suspect ones, we included the blow-hole and the rainbow!

Tired so most of us retired early again, ready for another full day tomorrow.