After an uneventful drive through the rain we arrived in Burgos, 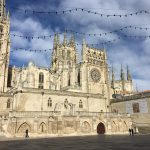 though we did stop for an excellent menu Del dia (somewhere) en-route.  After checking into our hotel with good intentions of going out, we collapsed and watched television, but thanks to our EE mobile WiFi box, watched BBC.

After a leisurely breakfast we set out to explore Burgos only knowing about Black Pudding and El Cid.  Our first port of call 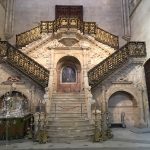 was the obligatory Cathedral, a magnificent building in the Gothic-style; building started in 1221and from what we gleaned carried on ‘till 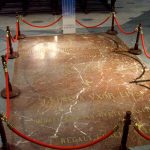 this day!  There are a number of current building projects ongoing.

Burgos itself is quite amazing and probably a must if driving through Spain. Historically it was founded in 881AD and was the capital of the Kingdom of Castile; there is a lot of history here, (too much to write about) but the cathedral also contains the remains of Rodrigo Díaz, known better as El CID, the Spanish warlord who 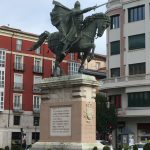 won a few battles in the 11th century.

Lunch called and we enjoyed a superb “Menu Del dia” where naturally we indulged in the local delicacy, “black pudding”, after all that was the main reason to come here!!!!  After a superb 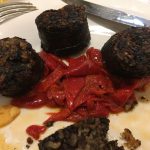 lunch we wandered back to the hotel through the numerous narrow streets and piazzas for a siesta.

Later that evening we strolled out, our plan was for a tapas and a drink.   This time we crossed the river but realised 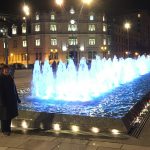 this area was commercial, modern and apart from some attractive, but ordinary fountains we headed back to the old town.  It had been very cold today and this evening was no different, so we were both jolly glad we had our long overcoats, scarves and gloves!!

In spite of the cold, the area in old town was heaving, families strolling 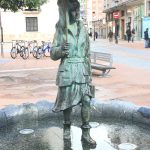 One of the many statues in the town.

everywhere, bars all full, although mainly inside, only the hardy smokers were outside, as usual.   After much meandering around, pontificating as to whether we were actually or hungry or not, we finally decided our lunch was so 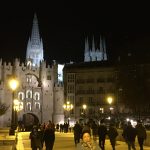 big, filling and enjoyable, that we really didn’t need anything else, so back to the hotel for us.

One comment: though the weather was mighty cold all day, we had wall to wall sunshine, not like our drive up yesterday when it rained most of the way. 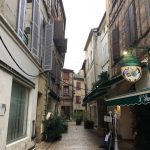 Lots of tiny shops and restaurants

Sunday morning we had a leisurely breakfast, but still away for 1000hrs and headed north to Bergerac, in the wine producing area on the north bank of the Dordogne.  We were originally going to head 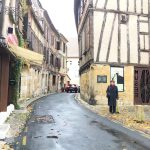 One of the tiny streets in Bergerac

straight up to Orléans but decided for a number of reasons to break the journey up.

One issue we have is Christine’s driving licence or should I say the lack of it.  Christine is in the process of replacing her U.K. licence with a 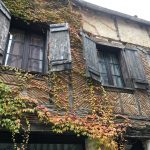 One of th many old buildings

Spanish one; this is taking up to 5 months to complete. Let’s blame Brexit because all the Brits are rushing to change before the deadline, whenever the politicians decide that is!!!!   Anyway the bottom line is that during this process she only has a temporary piece of official paper that is only valid in Spain.   Normally on long runs we do 2hrs on 2hrs off but as she has no licence outside of spain, she can’t drive and is furious, oh dear should have done it earlier!!!

Again our drive from Burgos to Bergerac was blighted by rain, and a diversion due to a road closure following a pileup taking us on a tortuous route through some interesting countryside, still we arrived at our hotel, still in daylight.

After a wash and brush up etc., we headed into the historic part of the town looking for a particular restaurant that we had found on line, and it was highly recommended. Fortunately it was open tonight as most were closed on winter Sunday evenings.   “Le Vinquatre” was 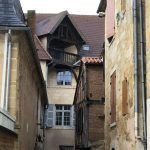 Many unusual buildings in tiny streets

everything we expected from the comments we had read on line, probably more.  The irony of it was that this “French” restaurant was owned by a couple; he was English and also the chef!, and his wife was front of house, but was French!

Monday morning was Dry fortunately, and though cold we took the opportunity to wander around the old town again, but being daylight, we could get a better look at the architecture etc.  The wooden timbered buildings all looked in good condition and the old street cobbles looked new but the 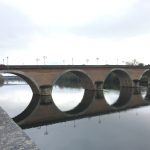 general ambience was good.   We walked down to the mighty river Dordogne which appeared to be in full flow before returning up the hill, through another part of the old town heading for our hotel, though we did enjoy a stop for mid morning coffee.

Back in the car we headed north, planning to arrive in Orléans around 1800hrs and just as we were leaving the city limits, the rains came down, again.    We experienced a most miserable trip of heave rain, heavy traffic and dark very early; three things that I’m pleased to say we don’t generally experience where we live on the Orihuela Costa and therefore we found it a very difficult drive.   Waze Satalite navigation system eventually delivered us to their new house on time and we were very glad to lock the car and walk away.  Though our visit was brief we enjoyed a good meal, and followed this up with a hilarious game of Phase 10.

Tuesday morning Mike and the two boys had to be out of the by 0730hrs followed by Catriona at 0900hrs which meant we also had to be away before 0900hrs so we were immediately in the tail-end of the Orléans rush hour traffic, but to be positive, it wasn’t raining, yet!

Today we decided we would do the péage motorways, I’d had enough of smaller roads and guess what, yes the rains came down again.   After a reasonable, but very wet journey we arrived at Sandy and Wendy’s house in time for a nice cuppa with a slice of homemade cake. 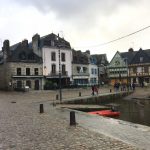 View of the Port

Tonight they had organised a dinner party, the four of us and their friends Jane and Mike who we had met on a previous visit.  We all had a great evening with lots of laughter, with Sandy and I eventually retiring to our beds around 3am after catching up following a long time, no see.

Following a lay-in and a light breakfast the four of us decided to go to Auray, a very pretty Port town with cobbled streets and timbered 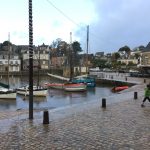 framed buildings.  We only wandered a short way to the nearest bar for a snack and a bottle of Vino, it was raining after all!!!!   Following a pleasant hour or so, there was a break in the rain so headed back to the car, then onto our hosts home.  After a pleasant dinner we retired early, we were all knackered from the night before: this getting old is interfering with our partying, not too happy about this????

Tomorrow we head for the ferry to U.K.

This entry was posted in Europe, France, Spain, UK. Bookmark the permalink.