Well we left Horndean, having dropped the dogs at Kathleen and Tom’s, they then came and collected us to take us to Heathrow.  On route we stopped at The Links, at Liphook, I have not been there for years, very nice, and we had a lovely meal there, a bit expensive but hey its the start of the honeymoon.

We arrived a bit early so we did a bit of shopping, before we could hand our bags in, our flight was at 6.40 pm, we flew on an old air bus, which was very comfortable plus it was empty, we arrived at Madrid with two hours to spare for the next one, we managed to change our seats to sit together, then we played crib, and soon it was time to board.  This flight was packed a Boeing 767. 300 much smaller plane, and heaving, not a spare seat in sight, it was not too bad as we had plenty of leg room, and we managed to sleep plus take in two movies.  It was a 12 hour flight so you can imagine we were knackered, plus for some reason my feet have swollen. We did the immigration and customs and there outside was our taxi to the Hotel, so far so good. 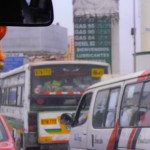 The traffic on route to the Hotel was amazing, horns hooting, everyone jostling for space, five lanes, crammed into three, reminded me of Cairo City, most cars had damage, but no one 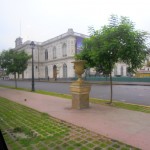 When we arrived we were told we could not book in until 10.00 am we are six hours behind UK, so it was only 7.30 am, so we decided to go and have a two hour buffet breakfast in the Hotel, it was lovely, and just what we needed. 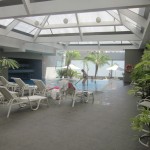 We were given our room, which is really comfortable, had showers and rested on the bed, we then went to the pool for a swim, sauna, and general chill out, very refreshing.

Went back to room, showered again, and then went for a walk down to the Ocean that is what they say out here, we call the sea, 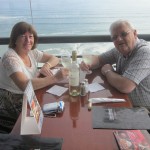 Dinner by the Ocean

we wondered around, and then found a restaurant looking over the ‘Ocean’ and had a lovely meal.

Busy place Lima we were in one of the districts called Mirofoiles, the upmarket part, the problem is we could be anywhere as the shops are all the same, Next, Guess, Radio-shack, Starbucks, KFC,  etc.,  etc.,

We wondered back slowly, taking in the embience, back to the Hotel, and I am ashamed to say we were in bed by six, and asleep probably a minute later