After a day at sea we arrived pretty early in the morning here at Puerto Quetzal and when we looked out of the window we were moored next to an LPG bulk carrier. Yes, the cruise terminal 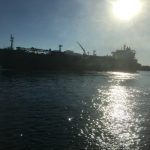 here is in with the commercial shipping and miles away from anywhere; no wonder they were doing a roaring trade with over priced tours, all there was in the “cruise terminal”, and I use those words lightly, were a number of arts and 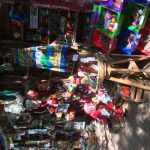 crafts outlets however, I will say the wares sold were all local and looked spectacular.

As the ship was due to leave around 1530hrs, (probably due to there not being a lot to see or do here), our plans were simple, we would stroll amongst the stalls, look at everything, play bartering games but come away with nothing, however all this changed when we were accosted by a fellow passenger. We were asked if we would join them on a private bus, share the cost and visit La Antigua. The split was $50 per person, but as we had no intention of going anywhere we had minimal money, no hat, water, rucksack or anything; no preparation. Christine looked at me with those eyes, you know the ones women have, so I looked in my pocket and I could just rustle up the required $100 so we said yes. At this point Christine ran back to the ship, all of 50 meters away and collected a handful bottles of water and off we went. I have to say I was a little nervous, by this time it was just before 1100hrs and the ship wanted everybody back by 1500hrs, a total of 4 hours but the trip we were told would take 1½ hours each way, that would give us 1 hour there as long as all goes well: oh well lets go.

We climbed aboard the bus, a fairly modern 9-seater Toyota with rear tyres that looked near the end of their shelf life and headed out of the port past mountains of coal, all sorts of pipes, containers and everything else you would expect to find in a commercial port and hit the road, and then our experience began.

We started out on a long straight Duel Carriageway and the first thing we noticed was the driving rules seem non-existent, you place the vehicle where you fancy and if anybody wants to overtake, they just had to find their own way past. Naturally, being the main road out of the port the road carried many HGV’s and by Jove they were long, forget 40 footers plus a cab as in UK and Europe, these were 40-foot rigs hauling another 40 trailer and they weren’t hanging about either. Against this backdrop we had to dodge our way past, weaving this way and that, remember we were in a hurry as time was of the essence here.

After about ¾ of and hour we stopped for a ‘photo shot; the Volcano was just starting to erupt and it started pumping out grey smoke, just for us of course, well that’s what our guide said!!!   A magnificent site but we couldn’t linger, we were fighting against the clock all the way.

We now started to negotiate the mountain pass at which point the guide told us the Air Con was being switched off as the bus needed all its power for the hills, they couldn’t waste it driving the Air Condition in the bus. Naturally this did send some additional alarms bells ringing; have we done the right thing we wondered: still, apart from overtaking and undertaking these slow lumbering juggernauts, pick-ups carrying numerous passengers in the rear, donkeys and avoiding passengers and huge speed bumps, all on the wrong side we got over the mountain pass, phew, so far so good.

51 miles later, we arrived in “La Antigua” and the first thing we suffered were the jolts on the cobbled streets. These streets were teaming with people as well as

heavy traffic, still so far so good; we had arrived safely and only a little shaken!!!!

La Antigua, also known as “Santiago de los Caballeros de Guatemala”, (what a mouthful, no wonder they changed the name), was founded in 1534. It was the capital of Guatemala until in 1773 when a major earthquake wrecked the place and it lost its 200-year reign as Guatemala’s Colonial Capital. The city being situated below the volcanoes, throughout their history they have had to put up with them erupting and causing damage. In 1979 UNESCO declared it a world “cultural Heritage Site”. The town has Cobblestone streets (already mentioned), colorful facades, and tiled roofs. As well as restored, and there are many un-restored ruins, of churches, Palaces, and Mansions mostly covered with Bougainvillea, this all makes this Spanish Colonial city a favourite with visitors from all over the world, and I think they were all here today. 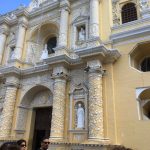 Time being short, our guide took us to the main points of interest, the first being the Le Merced Church, better known locally as “Inglesia de la Merced” (Convent of the Mercedarians). Was originally built in the 16 hundred’s but damaged and had to be restored, and In 1767 the restored church was open for business but then in the major quake of 1773 it was destroyed again. The current version, designed on the original design was completed in the 1960’s.

After leaving the church we walked down the main historic street, (5th Avenue North) pedestrians only but hard work on the cobbles. We had various things pointed out to us but the important site to view here was the “Santa Catalina Arch” crossing the street. This arch, built in the 17th Century originally connected The Santa Catalina convent to a school and was built to allow the cloistered nuns to pass from one building to another without going out into the street. The clock on the top of the arch was added later, in 1830’s. 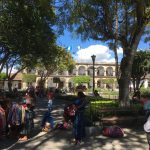 From the arch we continued down towards the town’s main square passing a building that from the outside looked like any other building in Antigua, but on closer inspection, through a gate, we saw inside; it was a beautiful 5* hotel; perhaps next time we come that’s where we will stay!!!. 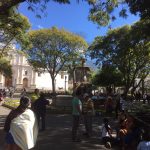 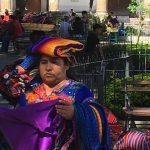 their wares [/caption]Moving on into the square full of local people selling their wares; unfortunately, or fortunately and due to the pace we left the terminal we had no money with us and as they didn’t accept plastic, no sales to us. This old 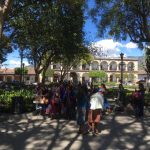 Colonial square, much as it was when the Spanish were here was beautifully kept, very attractive and the centre of all activities. Just off the square we had agreed to meet our guide outside a coffee shop, music to my ears. After a stroll around the square soaking up the atmosphere we went into the coffee shop and fortunately noted they accepted plastic, so 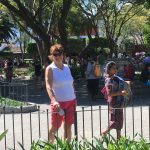 we came out with coffee and cake in hand and got back into our Toyota bus. Have you ever tried to drink a take away coffee whilst being subjected to violent driving on cobbled roads? And to make things a little more 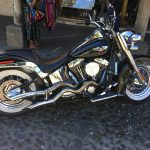 Geoff has designs on one of these, it was immaculate

difficult, eat a cake, well we were!!! After burning my hand as the hot coffee spurted out of that little hole you drink through, we came across a tarmacked road and whilst it was straight I managed to drink, always keeping my eye out for bends in the road when everything got difficult again.

The drive back was a little less hairy, mainly because we knew what to expect and also we were going down the mountains so minimal overtaking was necessary however, the driver managed to excel himself driving as if he was trying to catch a ship, overtaking and undertaking all the way.

We arrived back at the terminal ½ an hour quicker than it took to get to Antigua so in fact we hadn’t needed to rush quite so much whilst there!!! Still we both thoroughly enjoyed our short time and it was well worth a visit, we are both glad we made the effort.

Our travelling companions, David and Christina were also glad they made the effort and we agreed to have dinner tonight to mull over the experience.

Back on the ship, a quick snack and drink and then up by the pool for some more serious sunbathing and the odd Pina colada before returning to our cabin for the three S’s. We had agreed to Meet David and Christina at 1900hrs for dinner in the main dining room but unfortunately only David arrived, Christina had a migraine following the traumatic journey back to the ship so stayed in her cabin; we hope she is fit for tomorrow.   The three of us had a very congenial meal and reveled in the fact we paid $50 per head instead of the $120 per head on the Ships tour and we look forward to tomorrow when we dock in Nicaragua.

This entry was posted in Guatemala. Bookmark the permalink.