Grand Union canal to the Thames

We continued our journey, from Milton Keynes to Brentford, gradually reaching the Thames, the canal although hard work at times, is 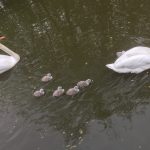 beautiful, we have seen some lovely sights, with swans and their signets, ducks, with their chicks, and also geese with their babies, such a great sight, and something we would never normally see. The scenery 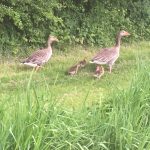 They were just standing by the lock

is amazing, and certainly a brilliant way to see England.

The weather has been great, although we have only had one 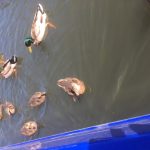 Ducks looking for food at boat

afternoon of rain, we have been in shorts for a few days, although it still gets nippy at night. We stopped at Leighton Buzzard, and had a look around, also managed to get another bad hair cut! 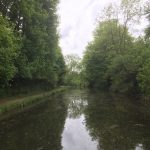 We had some helps with the locks, where there were volunteers, also one day we travelled with a couple who had had the same boat for 41years, the locks were easier then, as we shared the load.

Geoff’s birthday we tried to stop at several pubs, but couldn’t find anywhere to moor, in the end, we found a pub very close to the lock, we quickly tied up, and instead of dressing up we had a scruffy night with lots of beers for Geoff and red wine for me, food was good, and an enjoyable night was had. 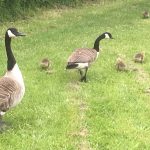 Canadian geese with their babies

We arrived at Brentford, at a very posh marina, it is at the entrance to the River Brent, which leads to the Thames, I wanted to go to Laundry to change the sheets, so we walked into Town, dumped the sheets, and went and had some coffee, that’s the way to do it. We had to wait until 15.15pm before the tides were right to go, in the end it was very calm, and took about 1.1/2hours to get to non tidal waters at Teddington Lock. Now we are on the Thames no more locks for a while, and my mate Jane arrived tomorrow.

This entry was posted in Thames, UK. Bookmark the permalink.