Leonardo was waiting for us at the appointed hour and we were on our way to the airport but not the one in Brazil, the one in Argentina so had to go through the border formalities yet again.

This was a small domestic airport in a jungle clearing, not too busy but on the ball enough to charge us for overweight suitcases.   The local allowance is 15 Kg, we were into the early 20’s but the guy must have felt a little sorry for us as he agreed to put another case through with no extra charge!!!

After a faultless flight we touched down in Buenos Aries, waited an age for our cases to come through and then find our driver. After much searching no one to be found, and to add to the problem we couldn’t get through on the number we were given. Anyway some kind soul took pity on us and ‘phoned their contact and eventually we got the message that our driver had been given the wrong time, wrong flight, and the wrong airline, so we jumped into a cab.

When we booked this trip we wanted to use the time in BA to try and thin down before the Cunard cruise so asked Harry to try and get us an apartment but the nearest thing he could get was an Aparthotel. This will do the job, especially as it is right in the middle of Buenos Aries though the building is a little passed its sell-by date. We also got a very apologetic call from the lady who was due to pick us up at the airport and agreed to meet the us following day and re-fund our taxi fare; which I am pleased to say she did. 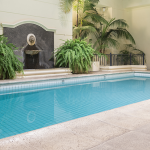 their sister, 5* hotel and we can use their pool; which we did on our first full day.

As I have already mentioned, our main objective is to do some healthy living and exercise. Healthy eating started with a visit to the supermarket to buy our dinner for the evening, a pre made salad and fresh fruit to finish; alcohol seems to be out of the question for the time being.  We also needed a laundrette, which is over the road and Christine needed a hairdresser and again this is over the road; all our needs catered for.

Our task now is to find the Hop-on, Hop-off bus so set off this 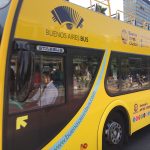 Big yellow bus in this city!

morning to the main line railway station, “Retiro” as we were told by reception this is where we would get all the information we needed. Ha, after a ½ hour walk in the heat we arrived at the station and there was nothing. No tourist information, no signs about the bus service, no sign of the buses, nothing. So after a cup of 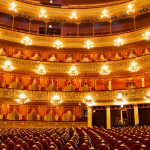 Balconies around were beautiful, but difficult to see all of the stage

coffee we plotted a route to the Opera House, “Teatro Colón”. This theatre was opened in 1908 though the 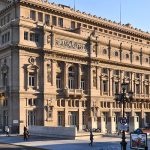 building work started in 1888 and apparently it 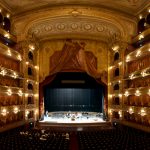 Horse shoe shape to give the best accoustics

has the “best acoustics for opera” in the world.

We arrived and booked “the tour” and what a 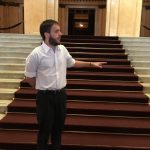 Our guide showing us the main staircase.

magnificent interior it is. We could imagine the gentlefolk in the early 20th century swanning up the grand staircase in their long dresses, showing off their latest 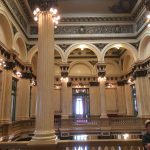 fashions from Paris etc. The entrance and grand staircase was built just for that. Upstairs in the “gold room” these same 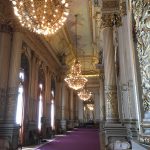 The gold room, amazing so much gold

folk mingled during the interval. It’s called the gold room as the upper parts of the columns and ceiling are covered in “gold leaf” It was a good tour and well worth the visit. 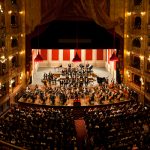 As we were leaving the Theatre we noticed the yellow, Hop-on Hop-off bus pass the side entrance so out I shot, but to no avail, it disappeared into the distance. We knew the direction it came from so walked back to the lights and waited 20 minutes ‘till the next one came along and maybe we would get a better idea. We eventually spotted this yellow beast in the distance and noted where it had stopped. That’s it, we walked to where this was and low and behold it was the bus stop for this city tour bus. Whilst waiting we got talking to another couple who kindly gave us their map of the routes. Now we knew the routes, where to catch the bus and the times they run, mission accomplished, so back to the hotel for another healthy option meal, salad and fruit and no alcohol!!!!  In line with this healthy regime we walked over 12,000 steps, 7.9-Km’s and we were knackered, again!!!!