Thursday 29th November, and after a very enjoyable couple of days we left Sandy and Wendy’s and head to Saint Malo for the overnight ferry to Portsmouth.  Arriving in Saint Malo mid afternoon, we chased around looking for a nice restaurant to eat before boarding but to no avail; everywhere was closed due to it being winter and Sunday, so finished up suffering a Mc Donald’s, still it filled a hole.

Arriving at the port we cleared the formalities very quickly and after a very short wait, we boarded, being a winter crossing the ferry was far from full so the lines were let go right on time.

The following morning, after a very comfortable night we arrived in Portsmouth and our first port of call was Tesco, fuel and a few provisions as we had a slight change of plan.   Originally we were heading straight to Northampton but due to the weather the new windows being fitted to Mark’s home weren’t installed on time so plan “B” was put into place and we stayed at Jenny and Bill’s for the night.   This was not all bad news, Christine managed to get up-to-date with the washing and visit her sister, Kathleen, who had recently been in hospital and was very poorly.

Saturday and we were up and away before 0700hrs, we arrived at 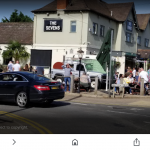 Outside pub on matchday

Mark’s at the appropriate hour (0900hrs) when Mark cooked us a superb English breakfast; well worth the early start.   We enjoyed a leisurely morning catching up before our taxi arrived to “whisk” us to to the “Sevens pub”, outside Franklin’s Gardens where we had several 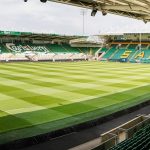 Guinness and other refreshments before heading to the ground, 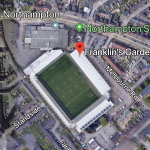 though en-route we did stop at the Saints shop for a number of items.

Just to remind ourselves, Mark and I had a little bet on the total number of points scored in the 48 matches played at this year’s rugby world cup in Japan; the loser buyers the beer at today’s match.  Fortunately I guessed better so I was enjoying every pint I had, and I had many!!!! 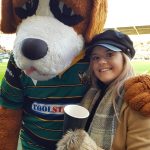 Ashleigh with Benney the mascot

In the ground the bar kept the Guinness flowing ?? as we took our seats to watch Saints play Leicester Tigers; the local derby everyone gets excited about.   What a good game, many England players on both sides and end to end stuff, very exciting but the outcome was the best; Saints had a convincing 36/13 win “and” with a bonus point, very satisfying.  After the match the 7 of us were joined by Jeff and Hilary for celebratory after match drinks in the Tetley bar under the Carlsberg  stand along with both Saints and Tigers supporters all having a good time.

We finished off the day over the road in the Indian Brasserie for an excellent “Ruby Murray” (where we naturally we over ordered), after which, our taxis were waiting to take us home for a night cap at Mark’s before retiring.   It was a superb day and I enjoyed all the banter I had, sitting between my two grownup granddaughters during the match.  Of course we drank too much Guinness, but the bet was, the loser buyers the beer so naturally boots had to be filled!!!!!! 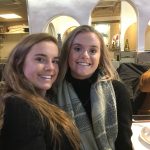 Sunday morning was a fairly leisurely affair but unfortunately Ashleigh had to return to Birmingham and would miss the family lunch.  Being a hard up university student she has got herself a job in a jewellery shop and being into the run-up to Xmas, she had to go. 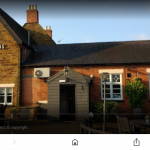 arms for lunch.  Mark had booked the large table in a private room so the “Page gathering” could get into full flow without upsetting other customers.   It was lovely to have all my family together round the table, though we did miss Ashleigh.  This was the first time we have managed such a get together for several years and it was good fun.  Back at the house Mia entertained us until bedtime at which time they left us.

This entry was posted in Family, UK. Bookmark the permalink.