Friday, and we up fairly early as we expected our Electrical Engineer to arrive around 0900hrs and apart from clearing breakfast things away, we had to empty the two large cupboards at the stern. As it turned out it was a good job we did get on with things as he arrived around 0845hrs!!! We had been recommended to this “sparks” by Simon, Meg A Star’s builder and whilst queuing to get into a lock got chatting (as one does) to another boatman who, it turned out had used our electrician before and was very happy; what a recommendation.

Apart from the washing machine, we had been experiencing numerous other electrical problems, but we felt that by the end of his visit today, all our electrical issues would be over.

The washing machine we had installed is a small “Zanussi” model, but unfortunately there is a glitch in the design, which, though acknowledged by the manufacture has yet to be sorted and this means this model is not really suitable for an installation that relies on power, fed by an Inverter. So our “not-so-shiny generator “ will still have to drive it. The make we should have bought was a Candy; never mind.

By midday everything had been completed, we had more reliable power; and the heating system worked, now hopefully we can relax and not worry of draining the domestic batteries.

Tonight we are expecting Jane, Dave and Mia to arrive late so we took the opportunity to re-visit the Swan, the “Morris Dancers Music” Pub for their “Fish & Chips” Friday special, and of course they serve good 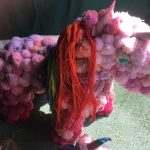 Unicorn made from Pom poms

Saturday morning, with 2-bicycles loaded, and 5 of us on board including Mia, any chance of a lie in was naturally out of the question 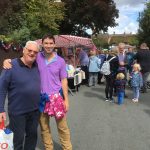 The boys at the fair

so after breakfast we set off, straight into the first of a flight of three locks; welcome aboard a canal boat!!!

Whilst in one of the locks, a fellow boater told us about an art sale in the Village of Alrewas and this interested Dave as he also enjoys painting. Two miles after heading off we arrived at Alrewas; moored up and headed into the village to find there was a village fete with numerous stalls and attractions in full flight. After 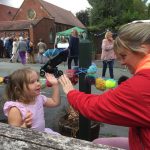 Enjoying a pint in the pub

wandering about we found the “art gallery” in the village hall. A quick scout round and 10-minutes later we were in the

pub enjoying a few beers. The fete certainly looked to be a great success, especially as the weather today was particularly good, sunny and rather warm, a complete contrast to the previous day.

Once back on the boat we headed off again towards Burton 0n Trent, picking up a “Hitch Hiker” on the way. Our “Hitch Hiker” was actually an instructor from one of the hire boat companies who had just left their client to his or her own devices. We deposited him at his boat yard and carried on but suddenly remembered there was a car still parked back at Fradley Junction that needed retrieving.   As the forecast for Sunday was mainly rain, Jane and Dave left Mia with us 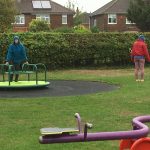 Me enjoying round about, Mia would not go on anything 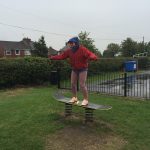 Jane enjoying a skate board

Marina, park up, then cycle back along the towpath until we met. This all went well, we re-loaded the bikes and carried on until we found a suitable mooring place, unfortunately not near any pubs so after dinner we played “Phase 10” much to Jane’s disgust!

Sunday arrived as predicted, cold and very wet but we had to get going especially as we had promised Mia a visit to the swings that they had 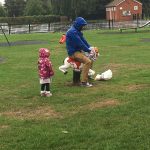 Dave playing Mia refusing to have a go

passed whilst cycling back yesterday. When we arrived it was still raining and Mia, undeterred, donned on her wet gear and out we all went. It was a very comprehensive children’s playground, quite empty of course, though several of our adult party did try things out but not Mia; she didn’t like the wet seats and though we had taken a cloth to wipe them down she didn’t participate so we all headed back to the boat.

Their actual car was in Willington, about 1-km before the Mercia 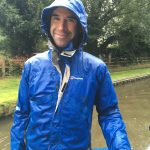 Marina so that’s where we stopped for the rest of the afternoon and listened to the rain, though the three of them did venture out to have a look at the shops in the marina whilst Christine conjured up a hearty dinner before they left and headed back to Essex.   It was a good 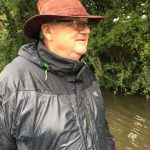 We were all soaking wet

couple of days but 5 in our boat is a little “tight”; It was a very good decision not to bring the two dogs with them!!!!!

The following mooring we sailed to Mercia Marina and when we arrived immediately recognised this marina; we had been here before to look at boats, in fact it was here we made an offer on one.

Monday night we spent at Shardlow, this is where the double size locks start before we arrive at the river Trent itself.