We arrived in Fortaleza after two days, one clearing out of the Amazon and the other at sea during which time we caught up with chores and played numerous games of Crib with our “Canadian” friends, Alvin and Laura.

We docked around midday but before that; today was the “Grand Brunch” day in the Grand Dining room and what a 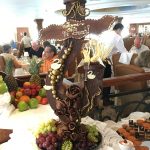 One of the many chocolate decorations

spread it was; everything you could possibly want, and a lot more. Naturally everybody wanted a 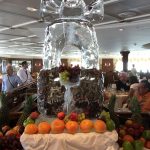 The ice carvings were brilliant

piece of this action and fortunately we had 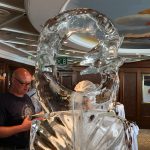 arrived about an hour after it opened, at 1000am, so didn’t have to wait to get in. Late arrivals unfortunately were queuing, but not for long I 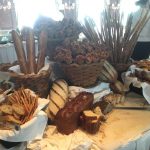 Even the bread had patterns on

must say, as the early “brunchers” left, the staff re-set the tables very quickly.

Having had our gastronomic fill!!!!! We left and joined up with our “English” friends David and Christina, and headed 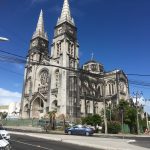 Cathedral which was very modern inside

out to town. There was a free shuttle bus, but as the buses only went every ½ hour, we calculated we were at least two busses down 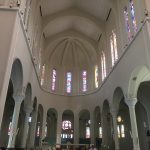 This cathedral is famous for all its stain glass windows

the queue, so jumped into a taxi instead, and headed for the Municipal market building. Across the street where from we were dropped, we spotted the neo-Gothic Cathedral Metropolitana, so headed in that direction.

It was certainly a very large building, in fact it is the third largest in the country, but the interior was rather basic and austere, not a Cathedral one would expect to find in a mainly 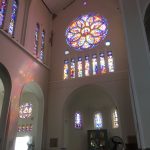 Roman Catholic country; still we had a look round as one does though not much else to report about here!!! The next place on our itinerary was the old theatre, so out came the ‘phone, and Google maps took us there, winding through narrow streets teaming with people and full of small shops and stalls selling most things imaginable. I was seduced and bought a rather splendid leather hat for peanuts, 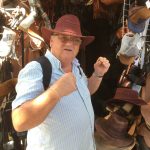 unfortunately the two Christina’s like it as well, so I will have to keep an eye on it!!!! 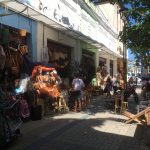 One of the side street markets

We arrived at this large central bustling square with even more people and again numerous markets stalls. With so many stalls selling much the 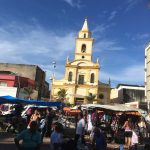 same items, we wondered how any of them managed to make a living though 1.3 million inhabitants living in this city must help I suppose. 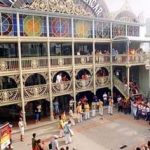 We went into the theatre building but then out again and 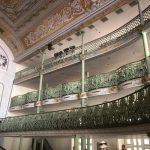 through a courtyard, we then arrived at the actual theatre; strange or what. We were expecting an old Victorian auditorium, similar to what we visited in Manus, but no, this theatre was built in 1910, which rather surprised us. Still it was worth the effort to get here and we had an opportunity to sit and rest. Whilst resting we noted a couple of tour parties from our ship come and go, they were also in the Cathedral when we were there. We felt a little (not too much though!) sorry for them: they had paid in excess of $100 for a tour of the city visiting the three places we visited and a lace factory $$$$$$$ and in the process of a sanitized coach drive, missed out on what this vibrant city is all about: still, each to his/her own.

Whilst sitting and resting in the theatre we were entertained by a dance troop warming up we presume, for a rehearsal

We now headed for the fort, “Fortaleza da Nossa Senhora de Assunção” (Fort of Our Lady of the Assumption); thank you Google maps, but when we got there it was a military base and not open to the public; another piece of miss-information! 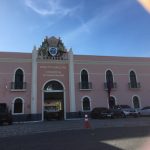 The fort we couldn’t go into

This area of Brazil has an interesting past. The Spaniards originally discovered this area in 1500, but it was not inhabited until 1603 when the Portuguese colonised and built the first fort.

In 1630 the Dutch decided they wanted a piece of this action and invaded the area and eventually took over the fort in 1637 but there wasn’t a lot left so the Dutch West Indies Company built a new fort. It was completed it in 1649, but In 1654 the Portuguese re-captured the area.   They re-named the fort Fortaleza da Nossa Senhora de Assunção, from which the town gets its name.

After the fort we went back to the Municipal Market which isn’t a market as we may know it; it is a rather large building housing about 1,000 very small shops selling anything from 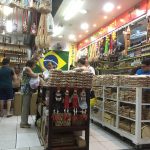 One of the many nut shops

clothes to food, touristy items to drinks but unfortunately by the time we arrived, most were either closed or closing. OK: after the obligatory rest, (it is very hot here), we’ll get the 4 o’clock shuttle bus back——- but oh dear, we’ve missed the last shuttle; we had no idea of the time!!!!!!

The idea was to get back to the ship, have a snack and go out 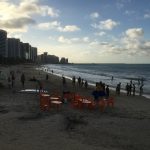 to the beach where the nightlife comes alive, meander around the stalls have a beer or two and get back on board for 2100hrs 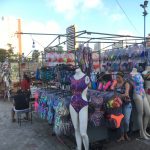 Stalls setting up ready for the night trade

for the show. That was plan “A”; so we moved seamlessly into plan “B”. We got a taxi straight to the beach; we were a little early as the stalls were just opening up and the place wasn’t yet fully alive so sat and had a beer. It wasn’t too long before things were “hoting up” and after browsing the stalls selling the same sort of things, we ended up in a beach 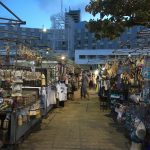 Rows and rows of stalls

restaurant/bar where we had; we “know not what” to snack on but it was rather nice. This was washed down with several of the locals’ cocktails and copious amounts of local beer. 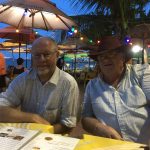 David and Geoff, Enjoying a pint or two

One of the many local artistic souvenirs are bottles, both 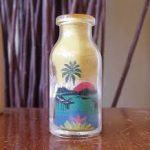 Patterned sand in a bottle

large and small, containing coloured sand. Now we all know one can get coloured sand at Shanklin, (Isle of White) and many other places but here they fill the bottles with colours in such a way that they show as a picture: in fact if you have sufficient time they will copy any picture you want!!!!!

We eventually headed for the last shuttle back to the ship but suddenly realised we didn’t actually know where to pick it up, so had another taxi. I must say the taxis here are modern and very reasonable so using them was no hardship.

We were back on board just in time to watch tonight’s show; an American version of “Call my bluff”. For our younger readers who most probably don’t know about “Call my Bluff” it was a TV show, way back in time, when 2 teams of three challenged each other with the definition of obscure words only found in very, very, thick dictionaries. Tonight show was different we had 4 panelists, two Comedians, the Ships Hotel Manager and a British singer. One person giving the correct definition; the other 3 giving false ones. The audience had to decide who was telling the truth. Well it was so funny; we were falling about in the aisles with the definitions, everybody had a good time, the shame was it ended, and unfortunately there isn’t another night like this before we get off in Rio.

After the show we went up to Horizon’s as it was a request night for 50’s and 60’s music. We were gob smacked, none of the singers or orchestra knew who Cliff Richard was, we tried in vain to explain but as he hadn’t made it in the US they weren’t interested. Oh well we had a good night and we were the last to leave getting to our cabin around 1.15am!!!

Tomorrow is another sea day.