Being 7 hours behind the UK, having breakfast at 0700hrs local time seemed much more civilised bearing mind the un-godly hours we have been getting up! 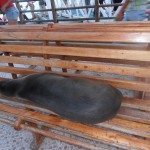 Sea-lion resting on the seat

Anyway, best breakfast we have enjoyed since the Liberator hotel in Cusco, very nice and our travelling companions are all very sociable with no apparent peculiarities, well that we have seen so far!!!!

So following breakfast we were off in the dingy to Puerto 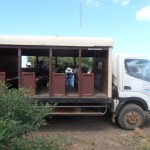 Velasco on Floreana Island for our first trek, upon landing firstly we had to help push start our “Chiva”, that’s a converted lorry that had rather hard seats built in the back, before it could take us to the centre of the Island, and then we trekked up the mountain.

After a rather bumpy and bone jarring ride we arrived at the drop off point, at which point we walked. 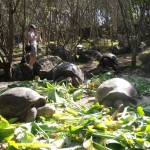 Our first stop was a very natural enclosure where they have placed a number of mixed breeds of giant tortoises and fortunately for us, being Wednesday, it was feeding day.  These animals only get food 3 times per week though they can go up 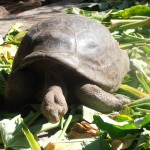 to 6 months without food and water, quite extraordinary; this was one of the contributing factors for their demise.  In the 19th century when Pirates, Whalers and any other passersby used to load these giant tortoises onboard, and as there was no need to feed them they were quite happy, and when the crews wanted fresh meat, it was to hand!

The Galapagos administration is trying to re-introduce the correct giant tortoises to the respective islands; yes over the thousands of years, each island has its own particular strain of tortoise.  The ones above have dubious pedigrees, so have been isolated, neutered and can now live their lives in comfort without expanding this “mongrel” population. 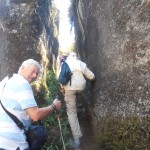 Caves we trekked through

We also walked through the nearest thing they have to caves which were as close as you can get to one of only two natural springs on Floreana.  Years ago people adopted these “caves” for living in.

Floreana is very short of natural water so there is a very small population though the vegetation and food crops have adapted very well.  It has a bit of a chequered history as far as humans are concerned.  Back in the early 19th century it became a penal colony for Ecuador and then it was abandoned until a couple of German “unusual” people inhabited the Island early in the 20th century trying to get away from it all in their country and these were followed by another German family whose off spring, through several generations, are still here today. Our guide told us some fascinating stories about these early inhabitants and what they got up to but they are not for here!!!!

We then made the return journey by the same Chiva to the dock, then onto our Zodiac dingy and back to the Beagle.  Prior to lunch we were exposed to “boat drill” to ensure we all knew what to do in the case of an emergency.  We then had a very nice fish lunch followed by a short “nap” for those who wanted one.

At 1400hrs we were loaded back into the Zodiac’s and taken to some rocks jutting out of the sea for our first snorkel. It was recommended we had wet suits on but alas they didn’t have large ones so I went without.

We arrived at out snorkel site and they all went in but the water was cold so I took a rain check, besides, Christine said afterwards that I hadn’t missed anything, which was lucky!!!

Back to the boat, a quick shower then off to the beach for a wet landing and to see another aspect of Floreana. We were accompanied to the beach by several young sea lions, playing around our dingy, fascinating.  We landed, walked around then over the hill to another, white sandy beach.  Behind the beach were sand dunes and we were warned to stay well away from these dunes as they were where the sea turtles had laid their eggs.  Above, flying around were many frigates just waiting to catch a baby turtle that had just hatched. 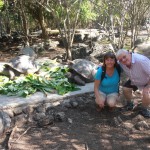 The animals are so tame, it is amazing

Normally nature takes a hand and these baby turtles “pop” out of their buried nest during the hours of dark, but on occasions, something goes wrong and they “pop” out in daylight and the frigate birds are there to pick them off for their tea.  This was an amazing beach as we saw 3 species of Sting Ray, sea lions, 1 shark, red crabs and blue footed Booby’s, we saw much more here in one day than we saw over the four days we were on the Amazon.

We were off the beach just after 1800hrs and back on board for tomorrow’s briefing followed by dinner.

Dinner tonight was a jolly affair, everybody gets on well with each other, the party has bonded well in the short time we have been together, and we all had a great laugh, though tomorrow is a 0600hrs start, oh dear, back to normal!!!