Today was going to be Hop-on Hop-off bus day but all this healthy stuff is getting to me, when I woke up I felt like s—t; I was running a temperature, coughing like mad and couldn’t stop blowing my nose; thanks Christine and a little sympathy would have been appreciated!!!!

Determined to put a brave face on it we went out searching for more healthy meals and a chemist. We accomplished both and returned to the hotel to drop our shopping off and catch up with any e-mail’s there may be, and to our delight there was one from our house buyers, confirming that they are now in a position to complete within the couple of weeks or so. Though this didn’t stop me from feeling like s—t, it gave us the excuse to go out to lunch and down a bottle of Malbec before returning to the hotel for a quiet evening and an early night. Oh yes, where we enjoyed our lunch, when we went to pay we were told they didn’t accept credit cards, and to make things worse, we didn’t have sufficient cash. We gave them “everything” we could muster and said we would make the shortfall good the next day if that was OK, and they agreed!!

One other achievement today, we booked a day trip on the Fast-Cat to visit Colonia in Uruguay. We will have to be up early on Monday, as we have to be in the port 1 hour before departure for immigration formalities etc. 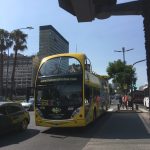 Yellow hop on and off bus

The pills the chemist gave us, must have had the desired effect as I awoke this morning raring to go, so back to the Hop-on Hop-off plan, but firstly an ATM was needed. After visiting a couple of ATM’s behind locked doors, we eventually found one.

OK, cash in pocket we went to the bus stop and there it was, just coming round the corner. There are actually 3 routes but 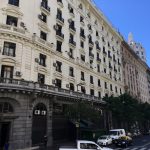 at present two are amalgamated into one. We started out at 10.20 and apart from an hour out for lunch when we settled our debt, 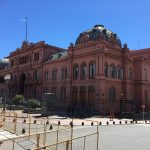 completed both routes by 1700hrs; it was a long and very hot day. Our intention was to case everywhere out then decide where we wanted to get off to visit the following day.

The city is quite magnificent, many open green spaces, very 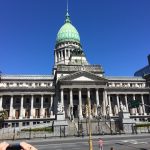 wide roads, in fact we counted 12 lanes running in one direction in one place.

Travelling around this way one gets to hear about their history. It all started when explorer “Juan Diaz de 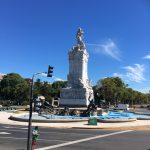 Soils” was navigating this region in the name of Spain, and he was the first European to reach the Rio de la Plata in 1516. His expedition was cut short though when he was killed during an attack by the native Indian tribe 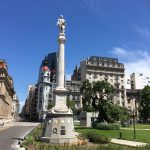 Plaza Lavalle, there’s a monument to someone or something on every corner

in what is now Uruguay.  In 1536 a settlement was founded by a Spanish expedition led by Pedro de Mendoza and 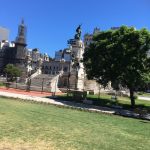 Outside the Plaza Congreso

he named the place, “Ciudad de Nuestra Senora Santa Maria del Buen Ayre”; Buenos Aries today, but in 1542 those pesky Indians, after causing havoc, finally drove all the settlers away from the area. A second, and permanent settlement was established in 1580 by a Conquistador; “Juan de Garay” who obviously wasn’t taking any truck from the local Indians! 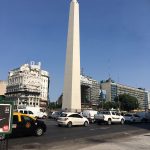 when the British invaded; the first attempt didn’t do the job but the second, in 1806 was successful, though not for long. An army from Montevideo kicked the Brits out again 46 days later. In 1807 The Brits managed to occupy Montevideo for several months and 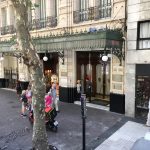 again they tried to occupy Buenos Aries, but after much street fighting and heavy casualties, the Brits withdrew; oh dear!!! To add injury to insult the Argentines are displaying as a war trophy, the colours they captured from the 71st Highland regiment of foot, at the Santo Domingo Convent, the place where they made their last stand. The remains of the soldiers are in a mass grave somewhere in the Belgrano area of the city. 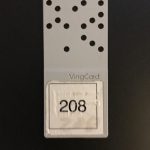 I mentioned in an earlier piece that this Aparthotel, the Loi Suites, is a little past its sell-by date, I think the room key technology proves the point; but joking apart, it couldn’t have been in a more convenient and central place for us to be whilst visiting Buenos Aries.

Today, (Sunday) is the second travel day on the Hop-on Hop-off bus but instead of going to the local stop we decided to walk to the Gallerias Pacifico, a shopping mall but not your usual 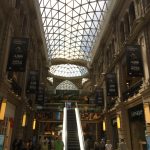 shopping mall, oh no, this was a building originally designed specially, and built in 1889 for “Bon Marche” of Paris but it never happened. Instead in 1896 the building became the “Museo Nacional de Bellas Artes” Museum of fine arts ‘till 1908. In May 1992 this building re-generated itself and became the Gallerias Pacifico, and we were walking towards it.

Being Sunday, naturally no shops were open other than a couple of coffee shops but the building is open so people can admire the interior iron work and the Frescos painted on the ceiling; 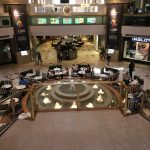 Enjoy coffee whilst watching the fountains 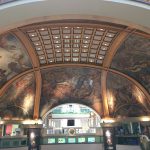 it’s quite a building, I would say far too good for a shopping mall!!!   Interestingly, on the opposite side of the street is the old “Harrods” building, this was the only store outside London carrying the Harrods Brand. The store was opened in 1914 and strangely, I remember visiting Father Christmas there as a child and the reason I remember was My mother asked me what was I going to ask F.C. for, and I wanted a wheel barrow; well one does around 5 yrs., old but I had to know what wheel barrow was in Spanish before I could ask him. Apparently 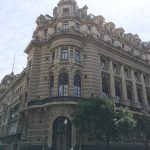 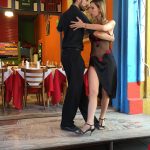 Tango dancers entertaining the crowds
mbnail wp-image-6107″ /> Harrods Old buildings[/caption]I sat around all day thinking what the word was and aeventually I remembered it, so off we went. I will never forget “carretilla”, the word for wheelbarrow. I digress; the store finally closed its doors in 1998 after a major court case with Al-Fayed.

Back on track and we headed up to the bus stop in the main “drag” Avendia 9th Julio, named to commemorate their Independence Day. 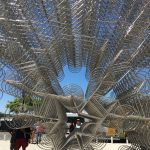 A very modern piece of artistry, 100’s of bicycle’s welded together

delight, this one had a sliding top so we weren’t in the sun, though this was short lived. We arrived at stop “0” and the driver was due for his 20-minute break but we were all told to get on the bus in front, which was about to leave; good and bad; good no waiting, bad, no top and we had to endure the hot sun beating down on us. We managed to stay on top until we reached the “La Boca” area where we got off. Though we 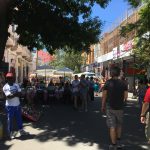 had been here back in 2014, we had been rushed on that occasion so this time we had time to meander around and have a couple of wines etc., and watch an “interesting” Tango Dance performed outside the bar. 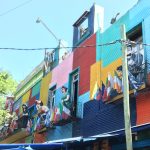 Colourful streets around the football ground

for the creation of the “Argentinian Tango”.   It is also the area where many Italian immigrants landed late 19th and the early part of the 20th century, and here they stayed and lived.   There is also a 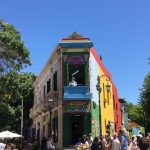 Back on the bus and again no top, just sun beating down on us as we headed for our next stop, Palermo Soho. Passing along the 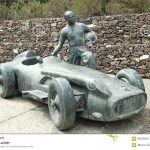 way we clocked one of the many statutes of “Juan Manual Fangio”, The Argentinian Grand Prix Driver who won 5 world titles (1951, 1954, 1955, 1956, 1957). We managed to stay upstairs until we arrived at the swing bridge, which naturally was open, so we had to just sit there until it closed. Without the wind being created by movement we had to dive downstairs into the air-conditioned interior, along with most other passengers; it was very crowded down there!!!

It was now getting quite late and we were hungry so once we left the bus we went in search of Argentine Steaks, yes they are good for the diet we are told, as long as there are no chips!!!

Palermo is the largest area by size in Buenos Aries and it is described as the young peoples area within the city, the coolest area in the city and that people flock to this area like “moths to a flame”; our sort of place! The area was buzzing, there were many small Sunday stalls selling trinkets and other object d’art, bars were overflowing and we found the Irish bar but sadly, we hadn’t time to visit it, steaks are what we wanted and steaks is what we were going to have.

With minimal trouble we found this excellent restaurant, 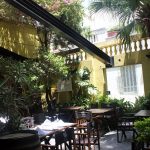 Started of outside then we went in

“Cabernet”, and we had a very nice waiter who said he was from Venezuela, though to us he sounded more American but after closer examination he admitted he had lived in Florida for 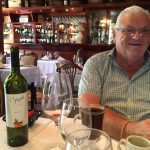 Geoff having had his steak and drunk the wine, happy bunny, too many salads!

several years. Anyway the steaks were cooked to perfection, just enough blood and we washed them down with an excellent bottle of Malbec, Grand Reserva. We shared a combination platter of deserts and before you say anything, we are still celebrating the news that our house sale is finally 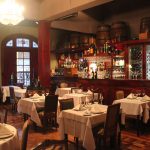 Inside this lovely restaurant

drawing to a conclusion.

We waddled out of the restaurant and started to worry that we may have missed our last bus, still we headed for the stop ever hopeful a bus would arrive, and it did. Our problem was we were half a block short of the stop so I walked in front of the bus a little to hold it back until we got to the point that we could manage a short sprint to the stop. Yes we caught the bus and were told by the conductor it was the last bus of the day, wow, didn’t we do well!!! Unfortunately this was a green route bus and we needed a red/blue route bus but as they were driving back to their depot, and as it so happened it passed the Theatre Colon, they would drop us off; a double wow, and if that wasn’t enough, we persuaded the driver to drop us off at the traffic lights ½ a block before the official stop; a triple wow; we were very proud of ourselves.

We went back to the hotel for a few games of crib and bed, for tomorrow we have to be up early as we are off to Uruguay.