First few days as a “Boatman”

After a major Tesco shop, we arrived back to Meg A Star early afternoon; now complete with washing machine.  Whilst Christine stowed away all the food etc., I returned the hire car and now we were now ready for the “BIG” off tomorrow morning.

After a comfortable night, we topped up the fuel, replaced an empty gas bottle, filled the water tank, had breakfast and we were off.

Unfortunately we were heading North and we wanted to go South, 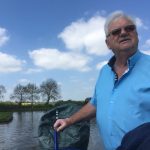 still, fortunately there was a winding hole about 1/2 a mile up the canal.

Mission accomplished and we were now heading south. 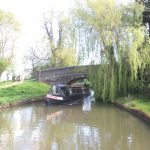 So pretty, this is what I miss living in Spain.

Today’s run was very simple, no locks but a tunnel. We stopped for a lunch break before tackling the Blisworth tunnel, a little short of 2 miles and zero lighting. We had encountered a tunnel the last time we were on the canals, but that one was much shorter; fortunately we had a good spotlight as well as navigation lights to see and be seen.

We entered the tunnel, dark, gloomy and cold, so we quickly donned fleeces but unfortunately we hadn’t realised it would also be wet.   As we passed the vertical air vents, we were drowned by so much water pouring down; there was no escaping these deluges, still once we were wet through, well what the heck, get on with it!!!!!

We had a boat about 50 meters astern of us, and going through tunnel we passed 4 boats coming the other way.  Just as a matter of interest, narrow boats are 6ft 10 inches wide, two abreast, passing are a smidge under 14 ft., but the tunnel is 15 ft. wide, not a lot of space so dead slow is the order of the day.  Anyway, about 1/2 an hour later we came out of 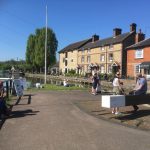 Stoke Bruerne, such a pretty place

Blisworth tunnel, unscathed and into brilliant sun; we had arrived safely at Stoke Bruerne, so moored at the first available space we could find.  We were lucky; we were only about a 4-minute walk 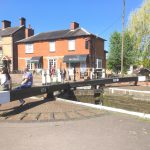 from the Locks, pub and Museum.

Blisworth tunnel is the third longest on the inland waterway system and took 12-years to build, opening in1805, 5 years after the Grand Union Canal was operational. During the 5 intervening years, canal boats used to unload their cargo at the wharf in Blisworth, transport the goods over the hill and re-load other boats at Stoke Bruerne, rather hard work so when the tunnel opened this stopped but the hard work was still there. There is no towpath so boats had to employ “leggers”; Legging is a method of moving a boat through a canal tunnel containing water. This method of navigating through canal tunnels has been commonly used in canal tunnels during the 18th century.

After sorting ourselves out we wandered down to the locks where there were numerous gongoozlers watching the various boats travel up and down this lock whilst enjoying drinks from the Boatman.  It was a beautiful hot day, most unlike usual UK weather, and seeing people relaxing with drinks, our guard dropped, we succumbed to drinks, oops!!!!, our first for two 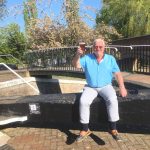 Back to “Meg” for dinner and a quiet night in, believe it or not we were knackered.

This morning, Mark Paula and Ashleigh arrived armed with bread and bacon, we had the butter so Christine made Bacon Butties; wonderful, especially as we had ignored bread for several weeks.  Oh dear our diet has gone out of the window and worse is to come tonight.

The family left around midday and we did a few jobs, but no beer at the pub!!!

Stoke Bruerne is a typical Northamptonshire village; a hamlet of houses built in the local sand stone, and apart from a couple of Restaurants, 2 canal side pubs; not to mention the canal museum, nothing else. The two claims to fame are 1/. Stoke Bruerne was mentioned in the Doomsday book and 2/. The canal cuts the village in half.

Our friends, Jeff and Hillary arrived just before 1800 hrs. for aperitifs before we went to the Indian Restaurant at Stoke Bruerne lock.  Our day has just got very much worse but we had a good evening with lots of laughter.

We waddled back to Meg quite late so straight to bed, we move on tomorrow. 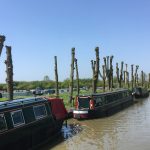 After breakfast we started, straight into the first of the 7 locks at Stoke Bruerne.  Christine was on form, we whistled through the first 5; I took over the last two, and believe it or not, another boat caught us up so I had help, much to Christine’s annoyance, ha ha!!!!

Once out of the locks we cruised for 6 miles, passing numerous 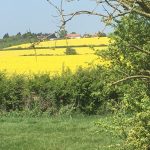 fields of yellow Rape Seed, jersey cows with their calves who looked us up and down, families strolling along the towpath taking in the sun, all as we cruised past. We stopped for lunch around midday and a 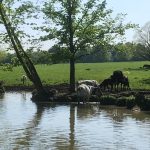 telephone call to Christine’s proposed builder, if she gets the house she wants!!!  Later we arrived at Cosgrove and moored just passed a gothic designed

bridge. This most unusual bridge is unlike normal canal bridges, just built out of red brick.  This bridge over the canal was built in the 1790’s at the insistence of a local landowner, the Biggins family, this canal was started at both ends; London and Braunston, and it met here at Cosgrove, hence the special bridge. Another unusual feature in Cosgrove is the “Horse Tunnel”. In the days of horse drawn boats, instead of building a bridge to change sides, here they built a tunnel and now this is a grade II listed structure.

We had a short walk to the next lock, as according to the Waterways guide book there is a small local shop; it was closed!

Walking along the towpath, the canal crosses over the Horse Tunnel, already mentioned.

The canal So back to the boat and relax in this hotter than hot afternoon and a cozy evening.