We are both sleeping very well, and the bed is very good, in fact I could get to like this cruising!

Breakfast was taken in the restaurant, where you can either sit on your own or share, we opted to share, and met this Australian family from Sydney, where Geoff had a long discussion about the welfare state, apparently they have similar systems.
After breakfast we had a guided tour of the kitchens, and I forgot the camera, it was fascinating, the equipment was the same as I had in the Canterbury Hotel, but lots more, and far bigger, they had huge dishwashers and freezers, their were meat areas, fish areas, pastry departments, everyone had their own space, it was fascinating, I am just annoyed as I had no pictures.
Later we went onto the coffee shop, they welcomed us back and apologised for yesterday, we said don’t worry we enjoyed the entertainment, and were disappointed it was so quiet.
Then onto a talk about the trips we are going on, which was interesting, but halfway through the captain came on the tannoy system say he had to change all the plans! 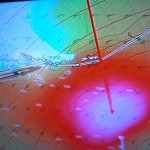 The storm we avoided

apparently they are expecting adverse weather conditions with sustained winds from a south westerly direction of 60 knots (110km or 70 miles per hour) or more. And waves of 9 meters (29 feet) or more in the drake Passage. These weather conditions will make it impossible for the celebrity Infinity to conduct the scenic cruising around Cape Horn and also prevent us from a safe passage to Antarctica. Well you can imagine how I felt, but hey oh, never mind, we get to go the the Falklands tomorrow instead of next week!
We both had lunch, then I decided to chill out by the pool, I did some swimming, and managed to drink three peach smoothies, they are lovely, who needs alcohol.