Sunday 25th November, the day we have been waiting for has arrived but no hurry, our boarding time is 1330 so decided to go in style and booked a limo to collect us at noon.

We arrived at the dock along with another couple of thousand people, still we eventually boarded, found our cabin and settled in, well not until we visited the buffet for our first lunch!!!!   Compulsory boat drill took place then we were off, sailing serenely past the statute of liberty, down the Hudson River and into the Atlantic, we now have 3 sea days but at least as we head south and the weather gets warmer.  Though we thought New York was cold, apparently we had been lucky, a few days earlier it had been much colder.

We used these three days to get re-aquatinted with Queen Mary 2 as she has undergone a re-fit since we last sailed in her.  The only issue on these sea days was a medical one;  we had to divert to Bermuda to enable an evacuation of some poor guest who had a major health problem.  We never found out what the issue was except that we had to add an extra 250 nautical miles to our journey and about 8 hours so our Captain then turned up the wick and we motored along at 24-Knots and eventually he caught up so we still arrived at St Thomas on 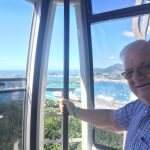 In the restaurant we are on a table of 6  the other 4 are from Canada: very nice people but unfortunately not the party animals we normally like to be with, so we’ll try and move to another table if possible. 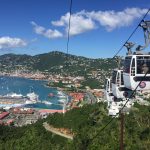 We’ve enjoyed numerous lectures on subjects ranging from the music industry to the truth about Columbus, and Concorde to WW2 spies and the evening shows are varied and quite spectacular.

Thursday 29th November and our first port of call, St Thomas in the US Virgin Islands where we took this opportunity to go on the “Sky Ride” (cable car), something we never got round to doing on our numerous visits in Anam Cara.  This was 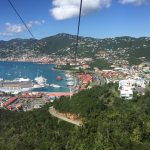 Fabulous views from the top

well worth a visit seeing Charlotte Amalie and the Bay Area from a great height.   These islands were named by Columbus in 1493 after St Ursula and her army of 11,000 virgins who were reputedly killed in 238 AD by the huns?!?!  The US bought them from the Danish government in 1917 for $25-million.   Though we are actually in the US here in St Thomas with the currency being Dollars etc., they actually drive on the left hand side of the road; weird or what !!!!! 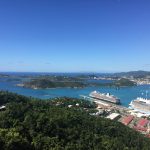 Worth the 21$ each, amazing views

headed to St Martin, expecting to arrive around 0700hrs tomorrow.

This entry was posted in Queen Mary 2. Bookmark the permalink.