Day with Andrew and Liz

Up early, tidied boat, ready for our visitors, so looking forward to seeing them both, haven’t seen Andrew since July, seems ages.

When Andrew arrived with Liz, we made a move, whilst I was making tea and bacon sandwiches, Geoff was steering up the Thames. The weather was lovely, blue skies, plenty of sunshine, quite chilly, but can’t complain. 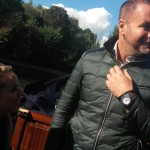 First lock was at Mapledurham, Andrew was disappointed that on the Thames, the locks are all done by a push of a button, he was hoping for the old fashioned way, which are 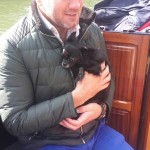 on the canals. We only had three other locks to go through , Liz bought her dog with her, which is a tiny chihuahua, long haired, she was very pretty, every time we came to locks, Andrew took her for a walk, so funny seeing a giant of a man, with such a tiny dog.

We arrived at Wallingford, and couldn’t find anywhere to moor up, I suggested phoning and asking if we can park outside the Boat House Pub, which was marked No Mooring, anyway a quick chat to the landlord and after a struggle to get in, we ended the day 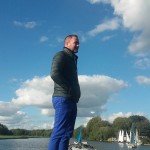 with fish and chips, outside the pub. Andrew caught a taxi back to Reading, then caught the train, we had a lovely day, and it was nice to spend time with Liz. They both look very happy, long may it last.

We had a very quiet nights sleep outside the pub.