After taking a leisurely breakfast we decided today was going to be more relaxing, my legs, ankles, knees are very swollen, and hurting me, I also have some sort of rash on one of my legs! 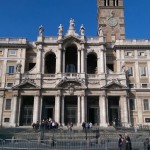 We caught the hop on and off bus, and went to the Basilica de Santa Maria Maggiore, one of Rome’s four patriarchal basilicas, this monumental 5th century church stands on the summit of the Esquiline Hill, on the spot where snow is said to have miraculously fallen in the summer of AD358. 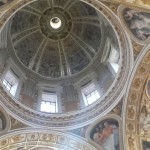 Much altered over the centuries, it’s something of an architectural hybrid with a 14th century Romanesque belfry, an 18th-century baroque facade, a largely baroque interior, and a series of glorious 5th-century mosaics. 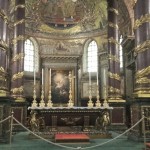 Altar with gold candlesticks and cherubs

The baldacchino over the high altar is heavy with gilt cherubs. The bell tower rises 75 meters high and is the tallest in Rome. The ceiling is covered in gold, and looks very 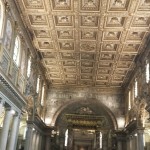 Ceiling made from gold!

impressive. In the crypt is a statue of Pius 1X the pope of the Immaculate Conception. 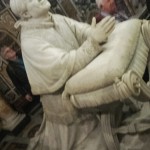 This place just oozes money, so much gold around, and fabulous statues, it truly is an amazing place.

We crossed the road, and went for a cup of tea, coffee, and two cakes, they were very nice, but not 20 euros worth! 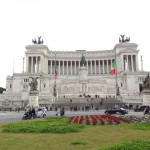 Back on the bus, we went to the Monument of Vittorio Emanuele 11.
This monument is one of the biggest monuments in Italy. It is also identified as the altar of the fatherland. It is one of the crucial components of the landmarks in Rome.
The monument can be found in the city centre, very close to the famous Roman Forum and the Colosseum and is said to be the most famous and representative monument of Roman history. Each of the two walls of the Monument has a chariot drawn by four stallions. 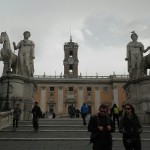 The two chariots are made of bronze, the same as the statue of King Vittorio Emanuele 11, which is found in the central point of this amazing complex. This splendid white building is possibly the best you will see in Rome. 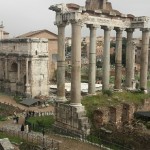 Royal Foram with Coloseum in background

We walked to the back of the building, where we could see the Roman Foram, where people used to meet up, courts would be held, and discussions could be held on future works to be carried out, also in the background you can see the Roman Palaces, and in the far distance is he colosseum. 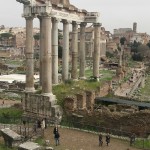 The circus maximums, was close by where they used to hold chariot races. 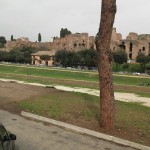 Circus Maximus with Royal Palaces behind

As we were walking we noticed a statue with a she-wolf on with romonus and Remus suckling. 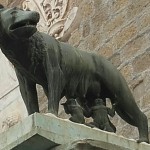 Romulus and Remus with a she-wolf that suckled them!

Sadly I can do no more, I am shattered, so with heavy legs, we get back on the bus and head back to the Hotel for a rest.
Having laid down for a couple of hours, we decided to go to the Spqnish Steps, which 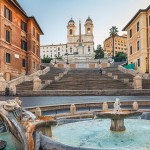 are in Piazza di Spagna, not far from the Hotel.
With its irregular butterfly design, the beautiful “Scalina Spagna” or Spanish Steps are just one of those must see places when in Rome and a great example of Roman Baroque Style. It’s a great place to just sit down and enjoy the at,osohereand views of the Eternal City. The steps are a wid irregula gathering plac consisted of 138 steps placed in a mix of curves, straight flights, vistas and terraces. They connect the lower pIazza di Spagna with the upper Piazza Trinita d I Monti with its beautiful twin 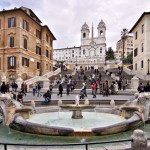 tower church dominating the skyline.
The Spanish steps were built in 1723-1725 by a design of the rather little known architect Francesco de Sanctis and were financed by French diplomat Etienne Gueffier’s.
The Spanish steps unique design and elegance has made it a popular place for artists s, painters, and poets, although sadly last night they were closed for restoration.
We met up with friends for an evening meal, in a lovely friendly restaurant, where we enjoyed our last night in Rome. 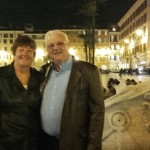 This entry was posted in Italy, Rome. Bookmark the permalink.