Wow, what a night, we both had a fantastic night; no noise, the beds stayed still, lots of room in the bathroom, a sumptuas shower and 2 double beds, we could spread out and 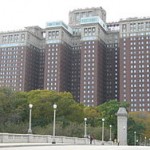 The Hilton Towers (our hotel)

hang our clothes up.  You don’t appreciate space until you have been deprived, two nights on Amtrak certainly did that for us.

Anyway, after this comfortable night and a leisurely “getting up” we decided to skip breakfast for now so went down to catch the big “hop-on-hop-off” red bus.  We found the 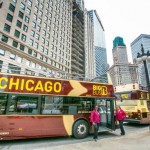 sign and their representative and chatted until the bus approached. I got the tickets out and then the chap pointed out we were at the wrong stop, this was the competition! He pointed us in the right direction, the stop was on the next block so waited there, by heck it was cold.

The bus arrived and we started our bus ride around Chicago. We had decided to do the 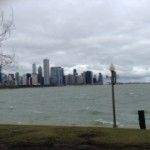 whole trip then decide what we wanted to see and do.  As I said waiting was cold but to make things worse was the bus didn’t have their heaters on downstairs and we got colder and colder as time went by until we got back to our hotel.  Back in the room I had to have a hot shower as I was cold right through to my bones.  We changed into our thermals, thick socks, overcoat, gloves and scarf then ventured out again.

Back on the bus, (this bus was warmer) and off we went again. We drove along the lakeside and looked on at the waves off Lake Michigan, the wind was whipping the water  up as if it was coming in off the Atlantic.  We passed many fine 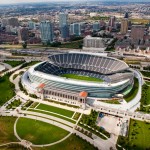 buildings including the Planetarium, Aquarium, Science and Natural History Museums 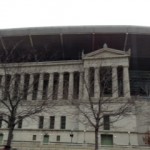 and the Chicago Bears Stadium.  We also passed several memorial parks including one to commemorate all Police officers killed in the line of duty in Chicago.  This park has a tree planted for each one killed, there are over 400, which highlights the the violent past of this city.
Following the lake side part of the tour we ventured into the Downtown area, amongst all the skyscrapers and got off at the John Hancock building.

We decided to find a restaurant before venturing up the Hancock tower.  We walked down the street and came across a restaurant called “Ditkas” it must have been a sports 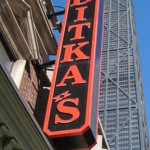 Where we had our Our Lunch

restaurant as all the walls were covered with pictures of Baseball and American Football Hplayers and it was full.  Perhaps we stumbled on a local hot spot being so busy and the food was delicious, not too cheap I must say but hey, we’re here and and enjoying ourselves, cold or not. 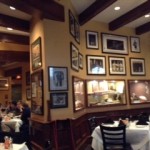 The John Hancock building is second tallest in Chicago and on the 94th floor there is a 360 degrees viewing gallery, including a part of the floor that (for a few dollars more)  tilts 30 degrees and the people hang out over “nothing”, 94 floors up in the sky, not for us!!!! We had a cupa instead, the views over the city and lake side were slightly restricted as it was cloudy, not too bright, still we got a good idea of the city. 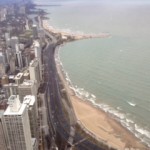 A View From the Hancock Towes

Back downstairs we caught the penultimate bus of the day but were told we had to change onto another one at stop 1, our hotel is at stop 6. We arrived at stop 1 and were told the other bus would be along in around 15/20 minutes, we found this strange, especially as there was another empty bus in front of us.  I asked why we couldn’t use this bus, only to be told that that bus was for the evening tour!  After about half an hour, we were told that the empty bus in front was the one we should have boarded but nobody had told the driver!!!!! After asking 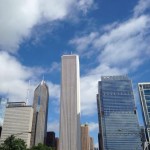 the obvious question, why can’t we use this bus, we were told it was destined for another tour.  By now I was quite annoyed at their incompetence and 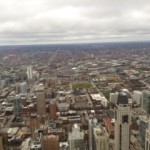 The Tops of the Skyscrapers from the Tower

inability to organise a bun fight in a cake factory.  The next announcement was to say a new driver and guide were going to arrive and they would take this same bus, we eventually left 50 minutes later.  We were on the way back at last, or were we? The guide announced we were on the night tour, oh dear I had to get involved now; suffice to say the driver took the route to include our stop, No 6. 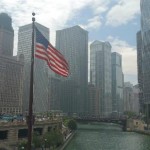 Downtown by the River

Arrived back to our hotel, eventually, back up to our room where we relaxed, had a cup of tea and an early night in this very comfortable hotel, still full from our big lunch. Christine also took the opportunity to iron the washing she had done last night and put more washing in for tomorrow to iron, no rest for the wicked!