Having had a brilliant nights sleep in our 7′ bed, we showered and went to breakfast, the 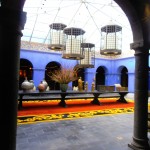 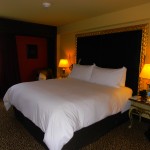 Hotel is amazing, it was an old Inca House, very easy to get lost, it twists and turns, but we found the restaurant, which has a quadrangle off where you can sit and enjoy the ambience of everything. 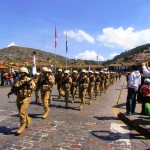 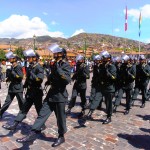 After breakfast we wondered down to the local square, and the had a parade going on, not sure why, but it was brilliant, most of the industries were represented, dancers in native costumes, and then all the school children, there were marching bands, soldiers, it seemed as the whole town was there, 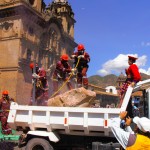 fantastic atmosphere, Geoff had his shoes cleaned by a young boy, and I bought a pair of sunglasses, obviously fake, but who cares I needed them. 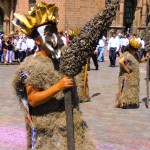 We met some people who seem to be following us everywhere, and they had problems with their room last night, so glad we were upgraded, apparently they have no windows, so not comfortable at all, we have lovely views, will have to pinch myself again. 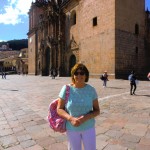 Back to the Hotel in time to meet our guide Eva, we are touring around Cusco in a group today, we first went to Basilica Catedral, which apparently was the 6th best in the world, we were not allowed to take photographs, but there was gold leaf everywhere, it was amazing, we had the story of how the Incas and the Spanish integrated into society, it was 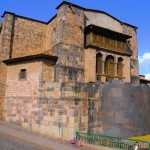 We then walked through the town to see their Sun Temple Qorikancha, apart from the bits where the Incas had built, we 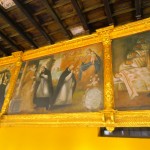 Some of the paintings inside the Sun Temple

both found it was a bit boring.

Back on the coach we then went to the National Park it was called Saqsayhuamán which means zigzag, this was stones bigger than Stone 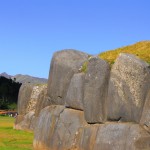 Some of the smaller stones

Henge, all piled on top of each other, and you could see the sacred animals included in the stones, we think you need a bit of imagination for this, but they were sort 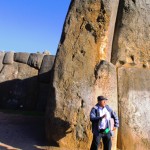 We walked through this lovely area, and boarded the coach again, where we went to Tipon which is a temple of water, we had both had enough by then so we and several others stayed on the coach. Later we stopped at a craft shop, where we also stayed put, we are knackered. 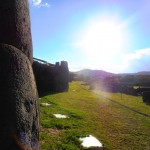 The walls all zigzaged along the path

We did enjoy the day, but with the altitude being 3800 meters, we are still struggling a bit, so we decided to stay in the Hotel and have a meal, which was lovely.

Then to bed as we have an early start tomorrow.