Cusco to Puno on the Andean Explorer

Today we are heading to lake Titicaca on the Andean Explorer, this is the Peruvian equivalent to the Orient Express so we had an early start, pick up 0715 hrs.  We set the alarm for 0600 hrs but both of us were awake before 0530 hrs waiting for the alarm to go off so got up, showered, packed then down for a leisurely breakfast. 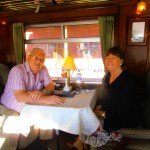 We were in the lobby at the appointed hour where Eva, our guide, was waiting with the private car to take us to the train station.  Eva organised our baggage to be sent to the guards van and pointed us in the right direction.  We boarded by 0730 hrs and settled in before departure at 0800 hrs.

This train is very similar to the European Orient Express to look at, the interior is in keeping with it, separate sets 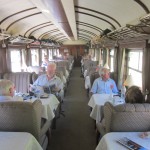 and we had an individual table, very nice. 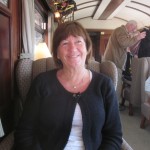 The sun is shining, the scenery is stunning and all’s well with the world.

We took a walk to the rear of the train to look out of the observation car and walking along another carriage we bumped into a couple we had met on several occasions as they, though not on our tour  are generally running in parallel with us.  After exchanging a few 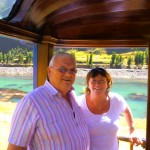 words we introduced ourselves and then Lulu and Nigel  joined us in the observation car, where we chatted, got on well and also found a lot of common ground.  It appears they lived about 10 Kim’s from us in Spain, knew our favourite haunts such as, Rebate and Clock House though not the Steak House.  But it didn’t end there, Nigel was the MD of a division of a well known PLC that also had a major Logistics arm and it was amusing discussing a number of folks we had both known in the past.  Like us, Nigel and Lulu have retired, they make it their business to have at least 4 holidays a year, we on the other hand try and have one long holiday! 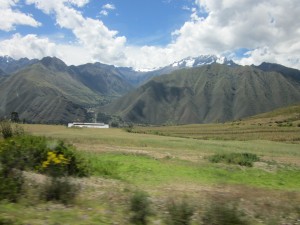 Standing in the observation car was amazing, watching this dramatic 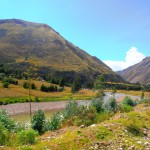 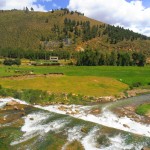 scenery with a backdrop of snow capped mountains and brilliant sunshine, in fact we had to move out of the direct sunlight as we felt ourselves burning.  Being up about 3,800 meters, the air is thin therefore the Sun is stronger, maybe we should have put sun block on. We were also given a very un usual drink, not too sure what was in it but it was certainly alcoholic and very nice, well I enjoyed both Christine’s  and mine!!!

Returning back to our table after another “floor show” 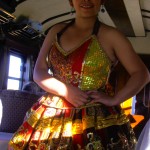 Th Cabaret on the train!

and more “Pan Pipers” followed by the customary hard sell, the scenery flattened out and we were travelling on a plateau with the mountains now in the background, not quite so spectacular, so Christine and I started  play few hands of crib ’till lunch was served.

Whilst playing the train stopped.  This line being a single track, Peru Rail have to be spot on with their timings, and low and behold this stop was a passing place and no sooner had we come to a halt, that the Andean Explorer traveling in the opposite came along side.  Now not only was this pretty good timing, it didn’t end there.  Prior to this stop our tables had been laid for lunch and bread rolls handed out in some quarters when we noticed a lot of to-ing and frowning between the trains, we also noticed the folks in the other train had finished eating, you could see that through the windows, but didn’t take too much notice and carried on playing crib.

Our train started again and 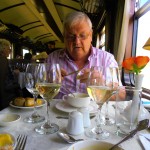 then lunch was being served when it dawned on us there were many more waiters/waitress than before.  Peru Rail, not only slick with their timings, are utilising their staff to maximum efficiency.  They fed the first train then moved across to ours and fed us, UK could take a leaf out of this!

Lunch was interesting, soup followed by grilled Trout, there was   another choice but we settled for this, we must have enjoyed it as we cleared our plates. We also had one glass of wine included in our ticket, though there was a pay bar in the observation car.

By now the plateau was fertile and much farming albeit quite backward in places and modern in others. We saw many Lamas 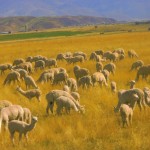 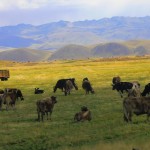 as well as cows and sheep with the odd Donkey thrown in for good luck. At places the railway travels along the Main Street of the villages we pass through with “Casey Jones” continually blowing the engine’s horns, drives you mad!

We then passed through one particular town called Juliaca, 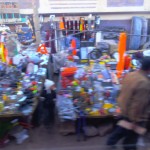 quite large but the train tracks were lined with market stalls for about 3 miles, both sides, that in itself may not be unusual but, the fronts of these stalls were literally a cigarette paper away from the side of the train. The stall holders and any customers had to crawl into the stall itself.  Additionally to these stalls 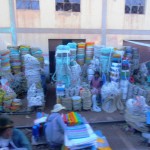 Loads of rope and string on market stall

were scrap dealers, second hand car parts, string and rope sellers and in between roads crossing the rail tracks with no barriers or anything.  I have to say this again reminded me of India.  We all thought this was all there was in Juiaca until we came out of this shanty part into a more prosperous area with car and truck main dealers such as Volvo, Honda and others, quite amazing.

Next came tea, a small roll, small sandwich, a kebab with 3 pieces of fruit and two chocolates, now you may think that mean but actually that was all we could manage.  This afternoon tea was was washed down with an odd cuppa, it was called a  “natural tea” I enjoyed it but Christine didn’t, so I had hers.

By now it was getting dark and we were approaching our destination, Puno. We arrived at 1820 hrs, having left at 0800 hrs in the morning, over 10 hours and covering 380 Kms or 236 miles yet the time passed very easily as most of the scenery was amazing.

After all the luggage was unloaded we were allowed off, collected our 4 pieces and as we walked into the station concourse, we saw our private guide waiting with Christine’s name on (that made her day!!!!) and we were whisked into our taxi.  5 minutes later we were in our hotel, not the best we have been in on this trip, we were certainly spoilt for the last 2 nights in a 5 star one but at least we are by lake Titicaca and our room looks over the lake.

Today was something we had been looking forward to, the Peruvian equivalent of the Orient Express traveling from Cusco to Puno and we both agree it was excellent.  An early night tonight as we are away at 0710 in the morning for excursions on the lake visiting floating villages etc.