Early breakfast as off on a trip today, rafting down the river! 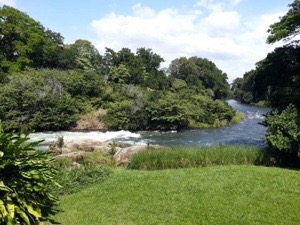 We had an hours coach trip, where most of the land is growing pineapples, bananas or coffee beans, that and tourism is how they make their money. Discovered by Columbus in 1502 and named “Rich Coast” on his fourth and final voyage to the New world, Costa Rica never lived up to the promise of gold or other riches like its neighbouring Spanish colonies. Puntarenas remained a sleepy village until coffee production in the late 18th century transformed the Costa Rican economy. By the 1850’s coffee had surpassed cacao, tobacco and sugar as the country’s number one export and Puntarenas’ port became a thriving business.
When we arrived we were warned we might get wet, and that cameras may get wet, and guess what mine did. There were eight boats with six people in, and we were the first to set off, straight over the first rocks, the river was running quite fast, so a lot of fun.

We saw monkeys, kingfishers, iguanas, but no caymans which is just as well. 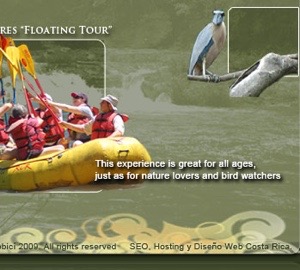 If my camera dries out we might have more photos.
We meandered for about an hour then came to an opening, where a free for all started, everyone splashing everyone, because we were in the front we got soaked to the skin, it was so funny, Geoff was giving as good as he got, but I couldn’t seem to hit back, we had a great time.
We arrived at the point of the river where we suddenly stopped, and our fun was over, we walked to the restaurant, and had a lunch of local food, fish, beans, rice, plantain, followed by ice cream, simple but nice.
Having changed we got back in bus, and arrived back at the ship at 4.30pm, we decided to go for a stroll into town, to get a fridge magnet, getting quite a collection now! They had lots of little stalls, selling their local wares, we found one and purchased it, we then stopped for coffee and tea $3 not bad. Think it’s quite a poor place.
We slowly made our way back to the boat, had a swim, and soaked our weary bones in the jacuzzi, with a couple of cocktails, it’s dark now, but lovely to sit on top deck under the stars! Later there were calls for a missing passenger, the ship was ready to go but missing one lady, we believe she did turn up, but who really knows, the ship left a bit later anyway.
After our lovely swim, we changed had dinner and went to the show.

This entry was posted in Costa Rica Punterarenas. Bookmark the permalink.