One of nice things about being on these canals is, “no rush”; start when you want, finish when you want, mooring doesn’t appear to be an issue, virtually anywhere along the towpaths.   Today was no exception, tea in bed with the breakfast news, a little nourishment to kick the day off, all very leisurely.

As we approached the first lock, the disused Buckingham Branch canal went off to our right and all we could see were several narrow boats moored up there, but for how far, we know not. There was also a sign asking for volunteers and funds for the restoration trust; this trust has been formed to bring this canal back into use. 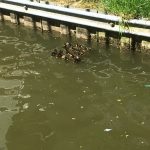 A family of ducks so cute!

Prior to our first and only lock today, we stopped to discharge you-know-what at the designated building, cruised into the lock, dropped down and that was it, we just 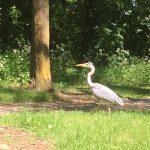 A heron, not worried about us at all.

cruised along admiring the local countryside, seeing a number of “Mrs Ducks” with her babies, and herons waiting to pounce.

Apart from the unusual gothic bridge we went under yesterday, the other remarkable engineering feet here is the “Cosgrove Aqueduct”, a cast iron trough went over the river “Great Ouse’, 40ft below and built in 1811. Before this engineering solution came into being, there were 9 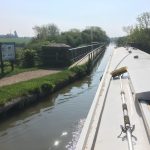 The Iron Trunk over the Gt.Ouse.

locks taking the canal down to the river then bringing it back up.

Christine had identified a large Tesco store at Wolverton, and Google maps said it was fairly near the canal, so that’s where we headed for.   Three miles later we arrived, this re-generated area had new apartments and a very splendid canal side with mooring rings embedded to ensure passing boats 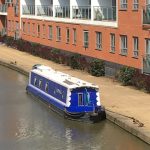 Meg was parked, whilst we went to Tesco.

Walking through this regenerated area we were reminded of Wolverton’s heritage, the railways. In 1836 Wolverton was chosen as the site for the locomotive build and repair centre as it was the 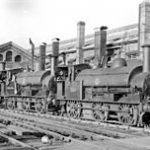 Old picture of the locomotive factory

midpoint of the London and Birmingham Railway. Building Engines ceased in 1863 but the area still continued to build railway Carriages, including the Royal Trains. Manufacturing and maintenance continued until 2013, when the last remaining part of the business went into 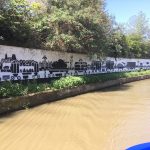 Murals painted along the tow path, they were quite spectacular

Back on board and off we went, meandering through the countryside, loving every minute of it.

We did have one issue yesterday; the shiny new washing machine didn’t seem to work correctly. It lets water in OK but doesn’t pump out; oh dear, just our luck and being a bank holiday we couldn’t contact anyone; still we kept going south!!!!   Today we made contact and arranged for someone to come out tomorrow. We moored near a bridge with road access, sent the bridge number through and now we wait.

Another lovely evening on the canal, let’s hope tomorrow is as nice as today.