We arrived at the port early morning, another commercial port 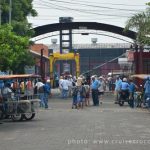 but this time full of containers, they were stacked everywhere. We suspected there was little to do or see here as we are due to leave early afternoon and what tours were available from the ship, were few in number and short on time.

After a leisurely breakfast, we ventured out and as soon as we left the dockside we were accosted, not so much by tour operators but by the local transport operators. Even though we said no to each one, they still kept trying to persuade us 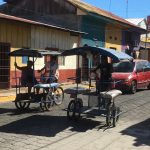 The bicycle were everywhere, one would ask we would say No thanks seconds later another one would stop.

theirs was the best offer. Oh yes, when I say local transport I don’t mean taxi’s or buses, I don’t even mean motorised tuck tucks, no, here they were pedal powered tuck tucks of a sort! They were everywhere and to be fair, used by locals though I suspect the locals paid a fraction of what they wanted to charge us!

For a large commercial port, the roads into and out of it were very narrow, un-even cobbles, potholes and locals milling around 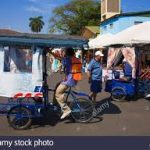 everywhere. The town was incredibly poor, the local inhabitants seemed to live in poverty but I have to say they all seemed very cheerful. 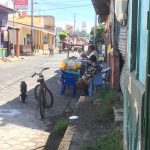 One of the street sellers outside their homes

The highlight of this “town” is the Park Central; this park is described as being notable for its numerous fountains 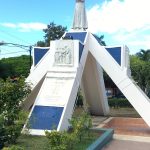 and ultramodern clock tower. After walking around the streets wee finally arrived at this small park, the numerous fountains described were bone dry and as for the ultra modern clock we didn’t see it. We did see 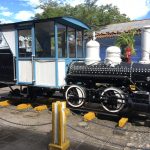 and old steam locomotive and the outside of the closed museum and the locals exiting their church. Oh yes there was a small fun fair also in the town but being Sunday that was also closed. Not what one would describe as a “highlight” of the cruise, in fact we wonder why they stopped here, there are far more interesting places to stop.

Having completed the tour of the town we re-traced our steps back to the ship, along with many other fellow passengers. And headed up to the terrace buffet for a spot of lunch, not too much as being Christmas Eve, there was a special dinner being provided that included Lobster and Christmas Goose.

A couple of hours up on deck taking in the sun and today, “Long Island Iced Teas” as way of a change, their strongest drink available, ha, they should have one of my Georgetown’s, that’s an alcoholic drink! 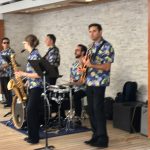 We were entertained by the Sirena Show Band playing whilst we sailed out of the port and onto our next port of call. 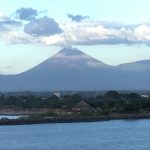 Sailing out of the harbour

Back down to our cabin for the 3 S’s and then into the Martini bar where they were having a carol sing-along, led by the ships singers. The only trouble was the carols we know had different words; they were of course the American versions.

We shared a table tonight with a nice elderly US couple who had travelled everywhere in their working lives so quite interesting. When we ordered, we skipped the starters, soups and salads and went straight for 2 meals; firstly the Lobster and secondly, the Goose; with no side dishes etc., we managed to clear our plates and still have room for a desert; diets, what diets????

We went to the show, tonight it was a Brazilian singer, I am sure she was OK but not for us and besides we were tired so headed back down to our cabin and bed, big day to morrow.

At this stage, I must point out to our readers that these posts with the pictures is all down to Christine, I write and Christine does the hard work of putting in the pictures and publishing, skills that I am lacking!!!

This entry was posted in Nicaragua. Bookmark the permalink.