Up at the crack of dawn, breakfast finished and outside hailing a cab all by 0745; and I thought we were supposed to be on holiday!!!!!

We arrived at the docks with the mandatory 1-hour to spare even though the traffic around the port was at a standstill. I think the hold up was simply too many HGV’s, Taxis and other traffic all converging on this one entrance to the port, but all this gridlock didn’t prevent our driver, and countless others, just sitting on their horns. 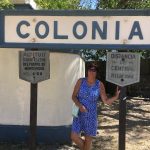 The journey across the “river” plate took about 1¾ hour’s in this “fast-cat” ferry, and very smooth trip it was. Waiting for us when we alighted in Uruguay was our walking tour guide; yes I did say, “walking”, and off we set

Colonia is a UNESCO world Heritage Site in southwest Uruguay, facing Buenos Aires across the Río de la Plata and is known for its cobbled historic quarter and colonial Portuguese and Spanish buildings. We found it strange as you could easily 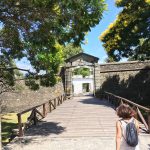 Entrance to the Old town 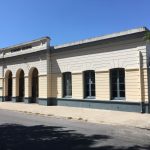 surfaces, and there is one very simple answer.   Between 1680 and 1822, the place changed colonial 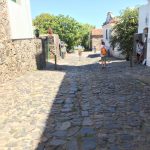 masters 10 times between Spain and Portugal until in 1828 when Uruguay was created.

Many of the old houses are now museums, small touristy shops and restaurants and bars. There is also the Colonia del 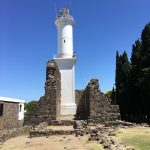 The lighthouse, with the remains of the convent in front

Sacramento Lighthouse, built out of the ruins of 17th century “Convent of San Francisco” and is a suitable place to go up to get panoramic views. Across the River Plate; not that we went up though!!!

Having walked around and listened to our guide who, though did commentary in both English and Spanish, her PA system was a little lacking and only if one was lucky, could you pickup every 3rd or 4th word.   Needless to say the tour whistled along very quickly.   When we were booking 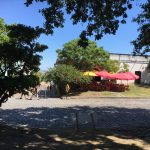 Very peaceful and pretty, after the hustle and bustle of Buenos Airies

this tour, Christine read a report by someone who said, “ the pity was we left on the afternoon ferry, we should have left on the 2045hrs ferry as we hadn’t completed 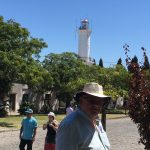 Not a happy bunny!

everything”; knowing this, we booked the 2045hrs return trip.

Our tour also included lunch, which we took at around 1230hrs as by now we had seen all there was to see. We even stretched out lunch with a bottle of wine but it was all over by 1445hrs and at this point I am afraid I had had enough though, Christine did think it was a pretty little place, though not pretty enough to stay ‘till 2045.

We walked back to the ferry terminal to see if we could change our tickets and get the 1620hrs ferry. No we were told as we had, though didn’t know it, a promotional ticket; it was 2045hrs only. The prospect of waiting another 5 hours was too much so we tore up our ticket and bought another 1-way ticket on the 1620hrs ferry; probably the best thing we did otherwise neither of us could be held responsible for what actions we may have taken!!!!!

We arrived back in BA, jumped into a cab and “b….y h..l”, when the driver put his foot on the accelerator, the noise, “s..t”, the taxi had no silencer, and behind the rear seats, where there is normally a luggage area with padding and other noise dampening upholstery, there was nothing, just a gaping hole. I would add that this was a proper; licensed; official; Buenos Aries radio taxi, anyway he got us tour hotel and we were very happy we had come away early. When we booked it was also suggested we may like to stop the night over there, thank god we didn’t fall for that!!!!

Tuesday was going to be local; we had another load of washing for the laundrette, Christine has a hair appointment and we now have, “I hope”, everything we need to submit our medical claim and after all that we will visit “Café Tortoni.

Washing delivered first thing, Christine later emerged out of the hairdresser’s as a skinhead, and armed with a piece of paper in Spanish, saying “Registered Mail”, we went in search 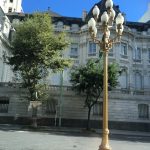 Some of the beautiful houses on route to post office

of a main post office, which we found very easily and between our piece of paper, our very limited Spanish and the Post Office chap’s non existent English, we think we have sent our envelope with our claim winging towards the UK, fingers crossed.

Now we’re off to Café Tortoni, originally opened in 1858, but moved to the current location in 1880. The Tortoni Café, is 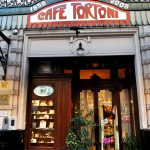 Entrance to the oldest cafe in Buenos Aires

located at in the “Avenida de Mayo” and Its name “almost” without doubts, comes from the XIX century famous Café Tortoni of Paris.  For almost a century, the Buenos Aires 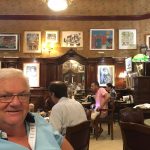 Tortoni Café represents the traditional spirit of this part of town, and is already a legend of the city of Buenos Aires. In this coffee house all the poets, artists’ thinkers and other “significant” characters whiled away their time socialising 100 years ago.  Nowadays it is still a place of cultural and probably more 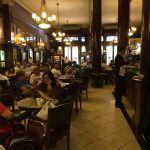 En route to the Café Tortoni, we were held up by a demonstration. The march was all about un-employment, whole 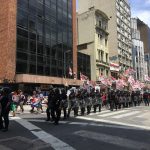 Nothing changes, where ever you go there are always demonstrations!

families taking part in this peaceful but noisy demo. Apparently the un-employment figure here is around 25% out of a population of the Buenos Aries region alone of more than 17 million people, and much of this is apparent as one walks the streets, people sleeping rough.Back to the coffee house; walking in, there is that air of turn of the last century ambience; dark wood panelled walls, waiters in black suits with bow ties, a serving counter and ‘till from the days of Adam and pictures and 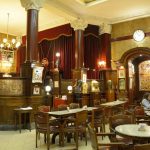 Another view of Café Tortoni

posters of famous visitors over the years. It was fairly busy but the service wasn’t great, though the cakes were nice and the coffee/tea was hot.   We are glad we went but probably won’t go back again. Out the back there is a small stage where on certain nights they perform a Tango show, we enquired but they only accept cash and cash is getting to be a little tiresome due to:-

Needless to say we didn’t book.

We walked back along the pedestrianised “Florida” street where many of the world’s brands can be found.

In passing, I must say public transport is plentiful; every time you blink, there is another “Colectivos”, a 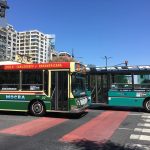 Buenos Aries Bus and they are all painted in different colours, presumably to denote what route they travel.

Upon arriving back to the hotel Christine casually enquired about Tango shows and where would you, “Mr Receptionist” go or recommend; he came straight back with “Madero Tango” They will collect and return to hotel and they take credit cards, the food is excellent and the show is magnificent. O.K, we booked for tomorrow night, another tick in the box.